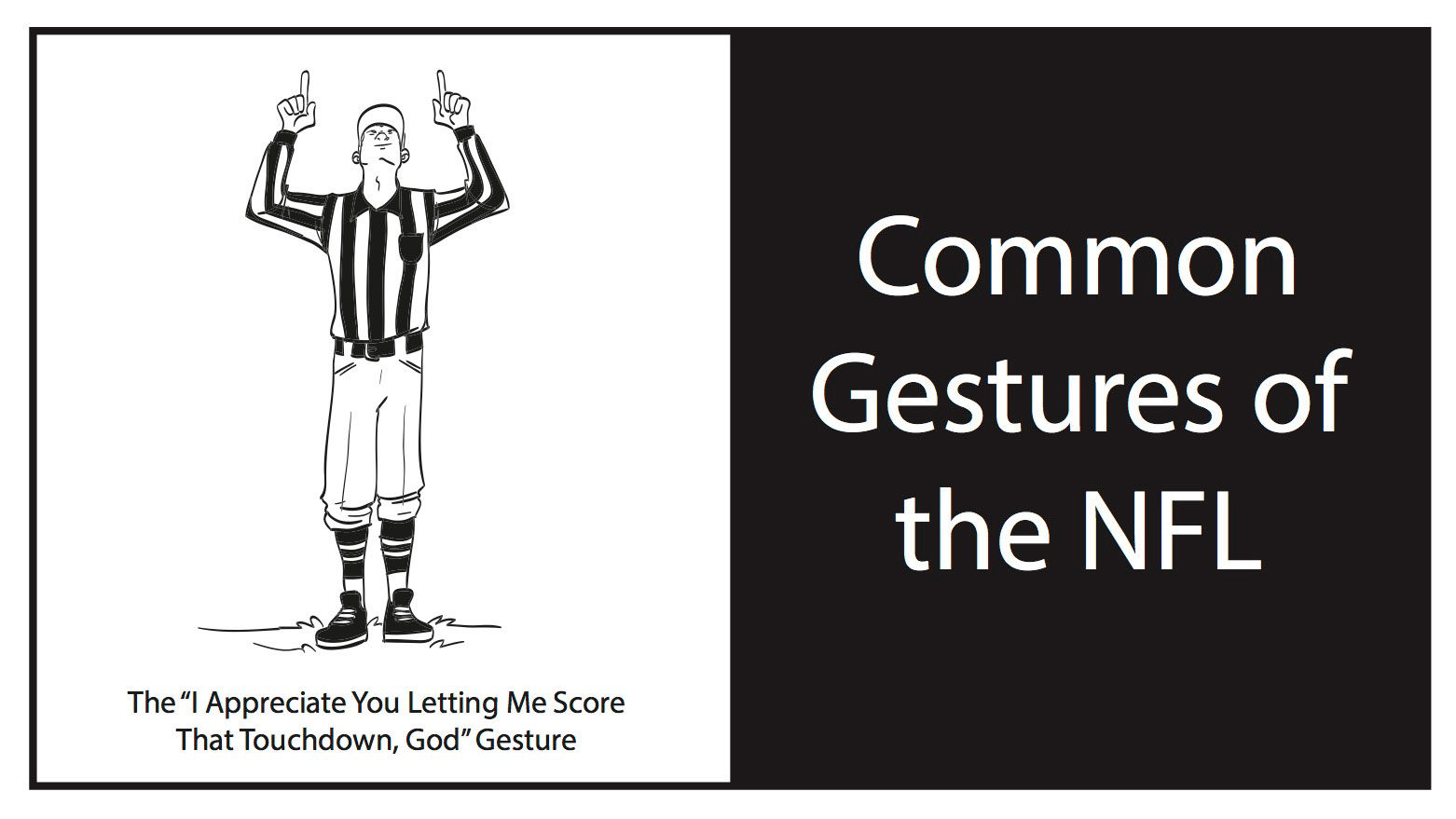 You know the official gestures you see during an NFL game. Think about a referee signaling that a field goal was good, or motioning for a block in the back, or making the “false start” gesture. Those things are all fine. They’re also not what we care about.

No, we’re concerned with the unofficial gestures you regularly see during an NFL game, like when a player scores a touchdown and then points up at the sky, or a lineman recovers a fumble and then holds the ball up in the air and waves it back and forth after he emerges from the dogpile. These are way more fun — and they’re way more interesting.

Here are 10 of the most common and most iconic in-game gestures you’ll see this Sunday and every one after. 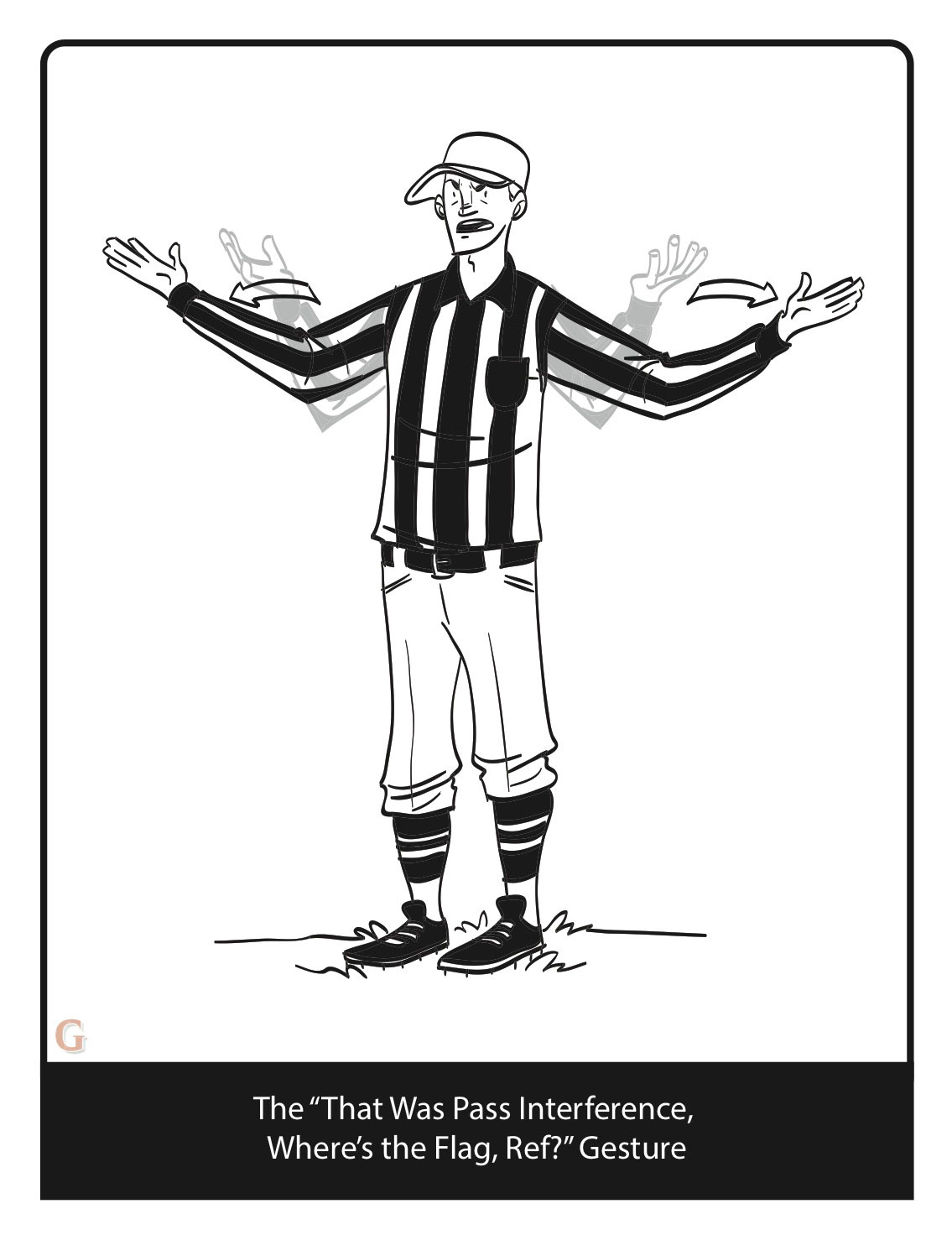 The good version of this comes after someone is the victim of very obvious pass interference but doesn’t receive the call (like when Cowboys linebacker Anthony Hitchens shielded Lions tight end Brandon Pettigrew at the end of their playoff game). It’s just total disbelief, and you can’t help but be sympathetic toward the receiver.

The bad version comes after a play when there wasn’t pass interference but the receiver pretends like there was because he didn’t catch the pass (like any time Keyshawn Johnson had the ball thrown toward him). It’s also just total disbelief — except in this version you don’t feel sympathy, you feel gross and ugly anger. As a father, my only goal is to raise sons who don’t pretend like they were the victims of pass interference. 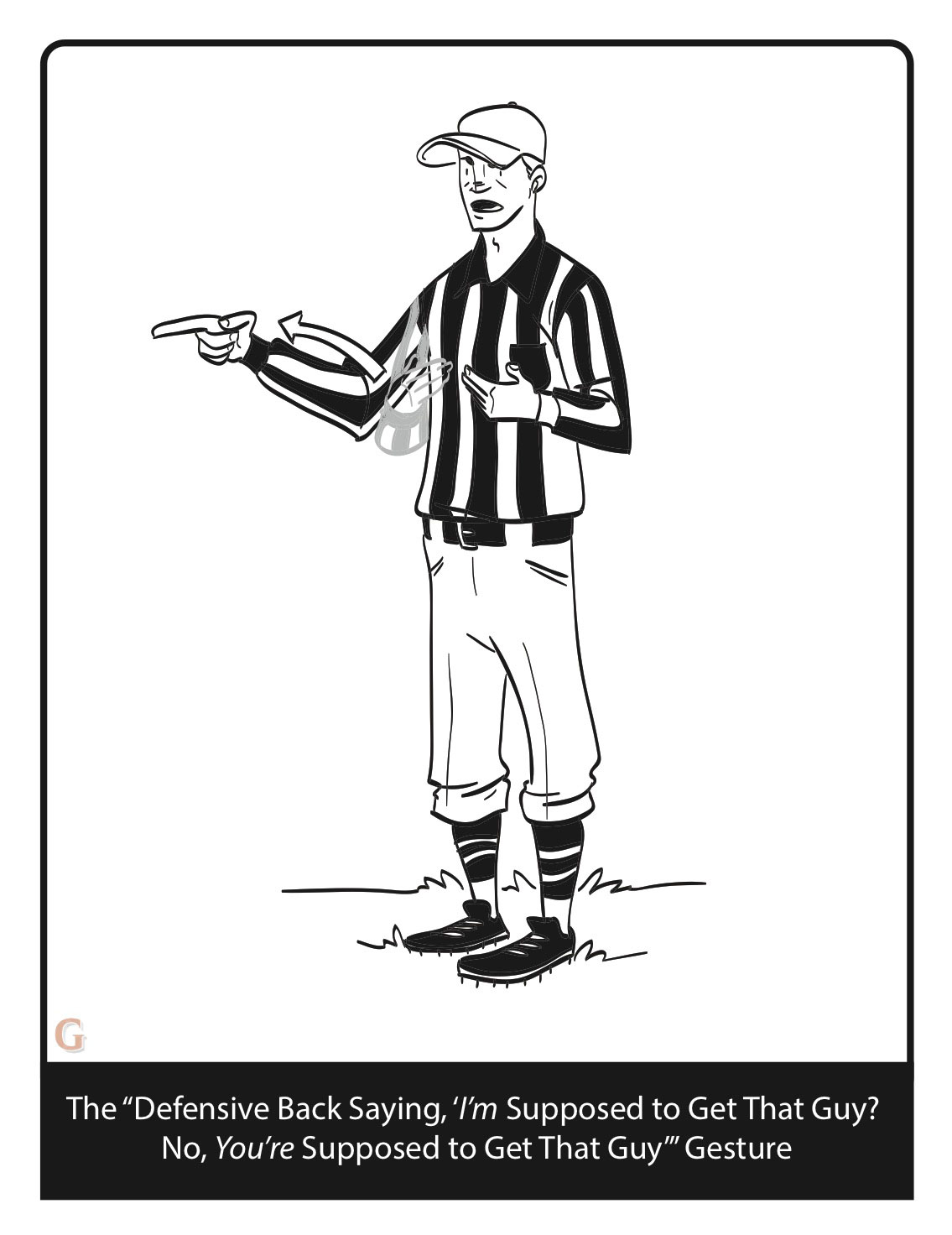 This one almost always happens after a receiver gets loose in the secondary for a wide-open catch. It’s my second-favorite common gesture among defensive backs. My favorite? 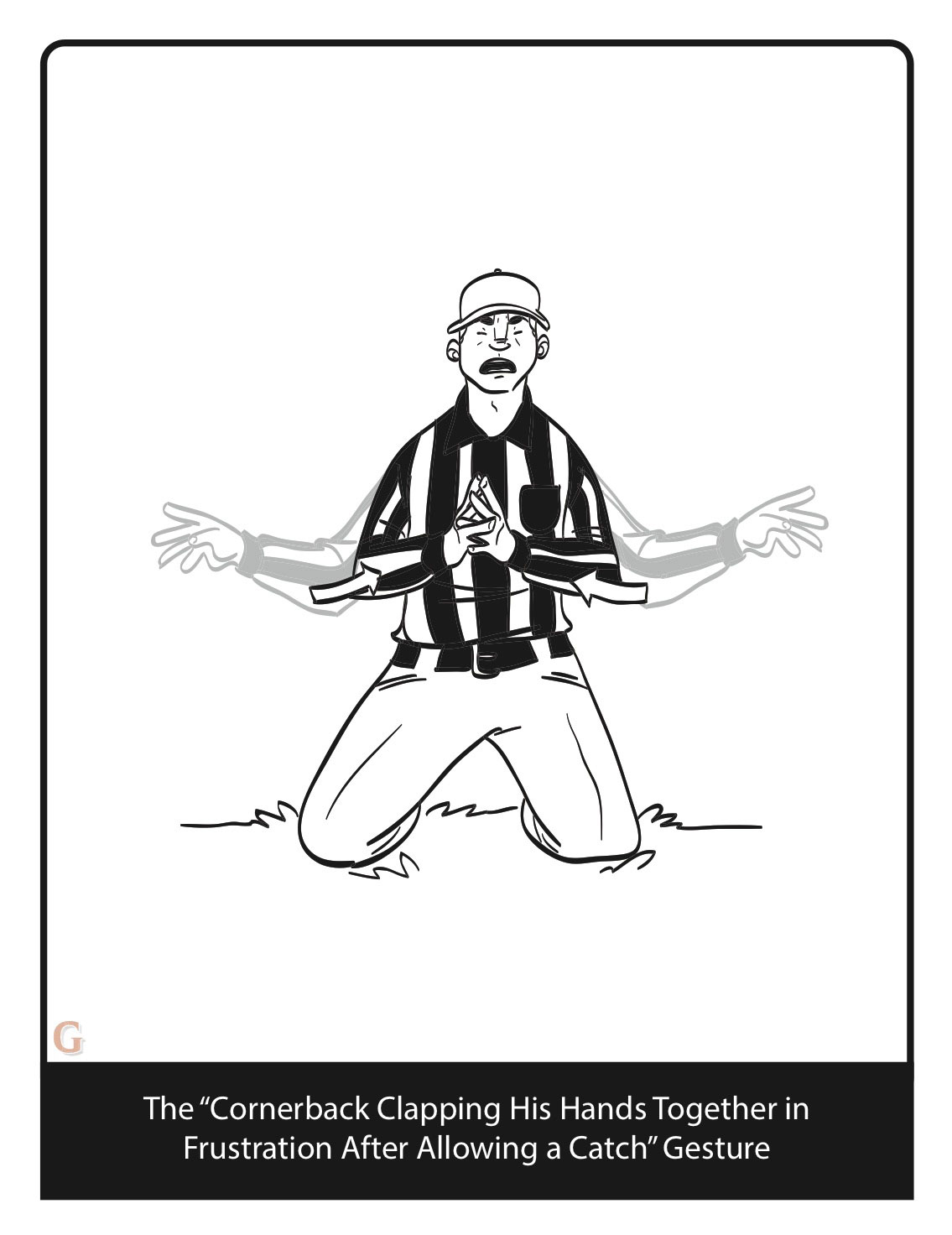 Very few things are more endearing than this one. To me, it’s always interesting to watch someone reconcile with the outcome of his or her actions, especially when it follows something not good. Of course, the opposite version of this one is … 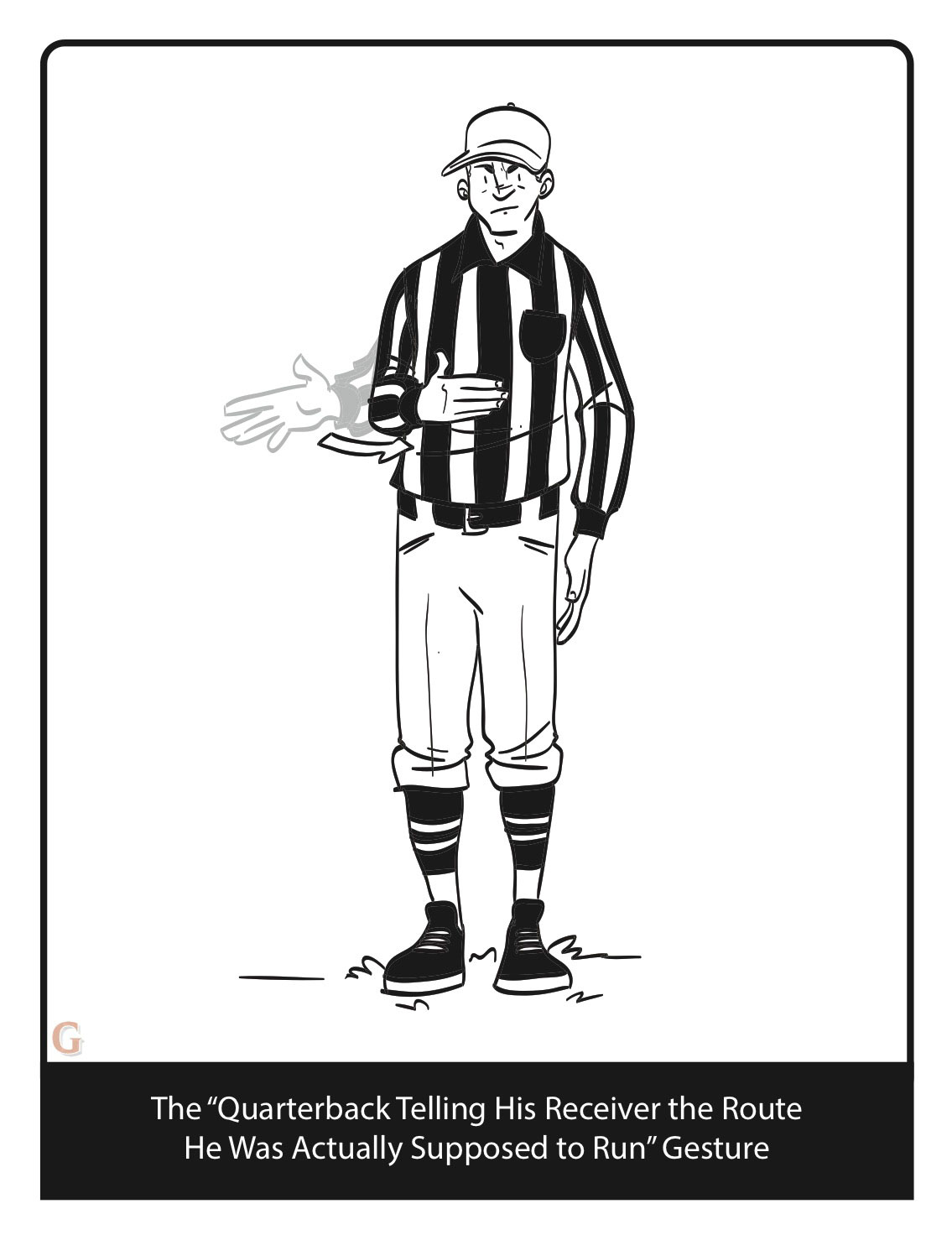 This one always follows an incomplete pass, and it occasionally follows an interception. Generally a gesture of frustration, it also contains at least a tiny amount of disdain. Tom Brady is exceptional at this, as is Peyton Manning. Neither of them gets to practice this next one too often … 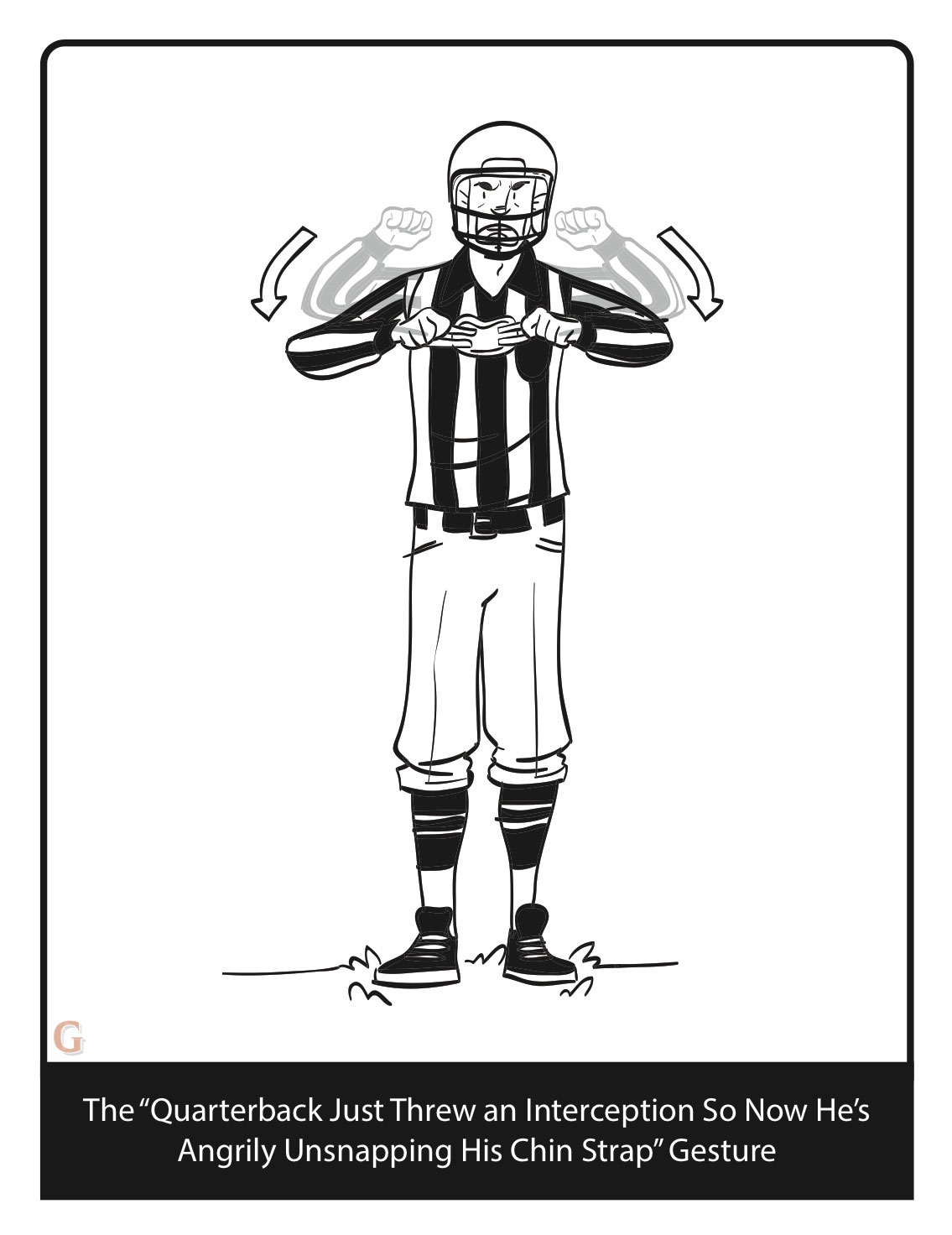 There are only two reasons I’ve ever wanted to be in the NFL, and one of them is because I want to throw an interception during a Monday Night Football game and then angrily unsnap my chin strap as I walk back toward my sideline. It always looks so dope when the cameras show it in slow motion right before the network goes to commercial break. As for the foremost reason I want to be in the NFL … 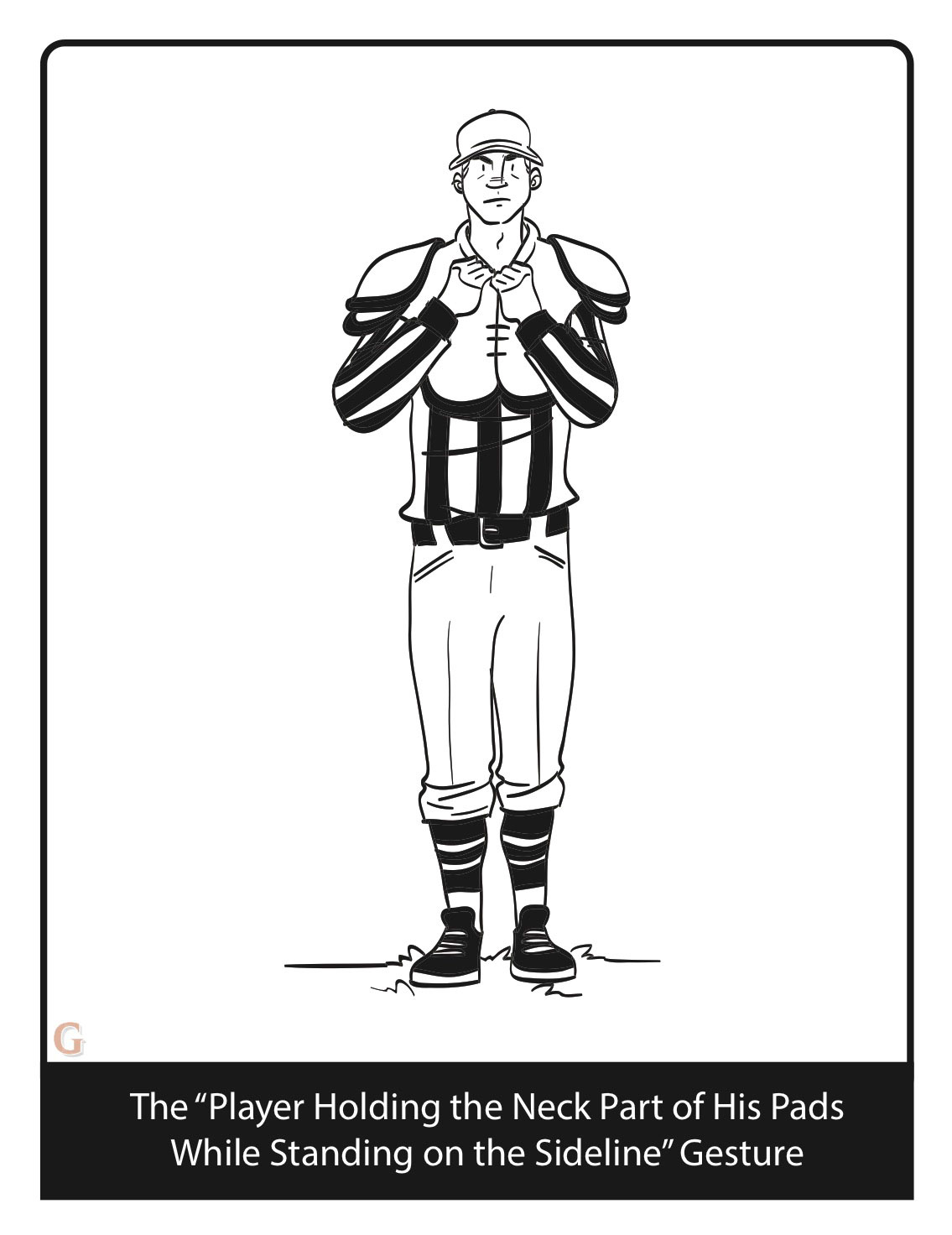 I’m so jealous that NFL players get to do this. It looks very cool. I actually bought a pair of shoulder pads, and I do this same thing whenever my sons get in trouble and my wife is fussing at them. I just stand there in the adjacent room, watching, hoping to get called into action. 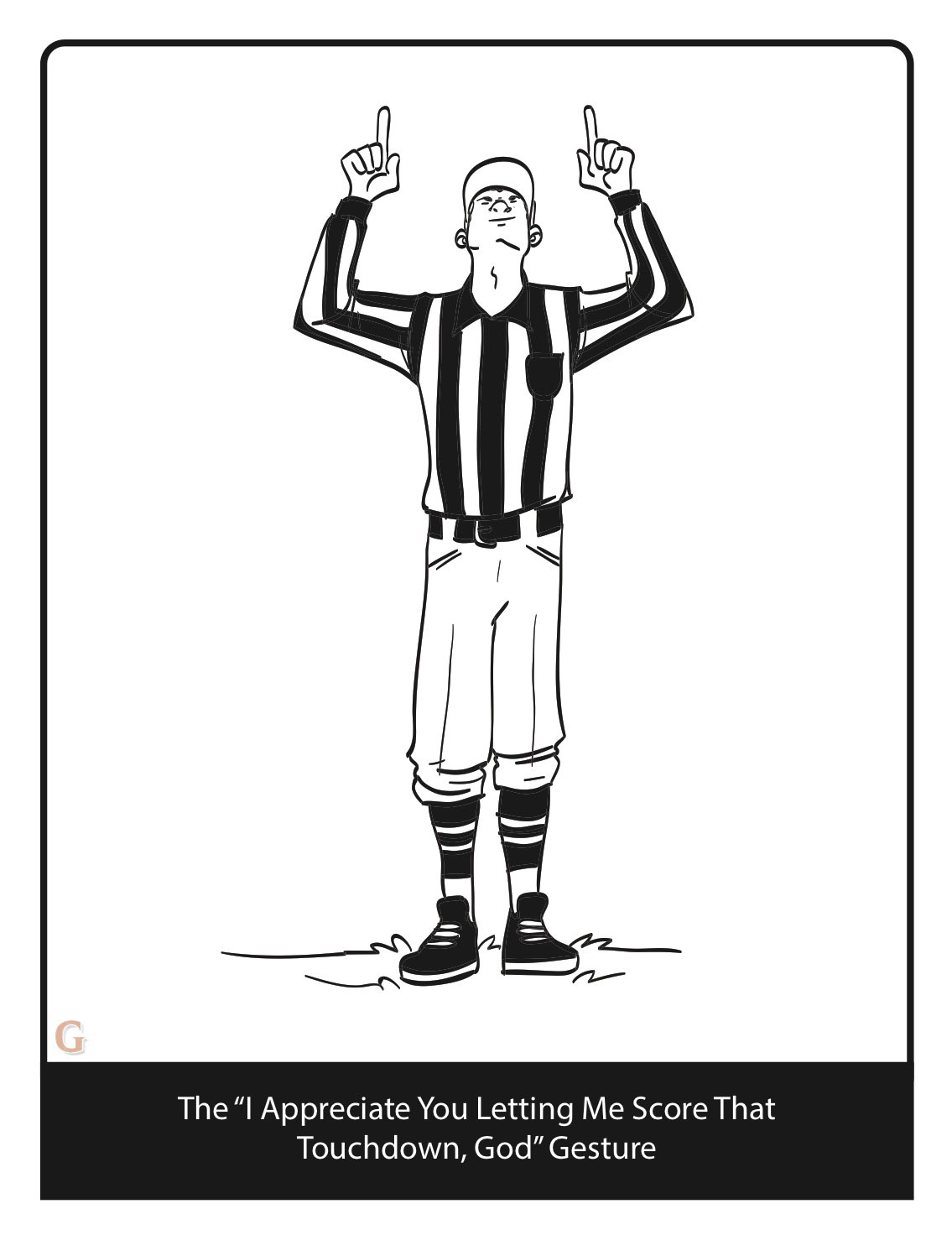 For God spoke, and he said, “Go therefore and make disciples of all the nations, baptizing them in the name of Rodgers and Gronkowski and Calvin Johnson, teaching them to observe all that I commanded you; and lo, I am with you always, even to the end of the age, even against the Seahawks defense.” 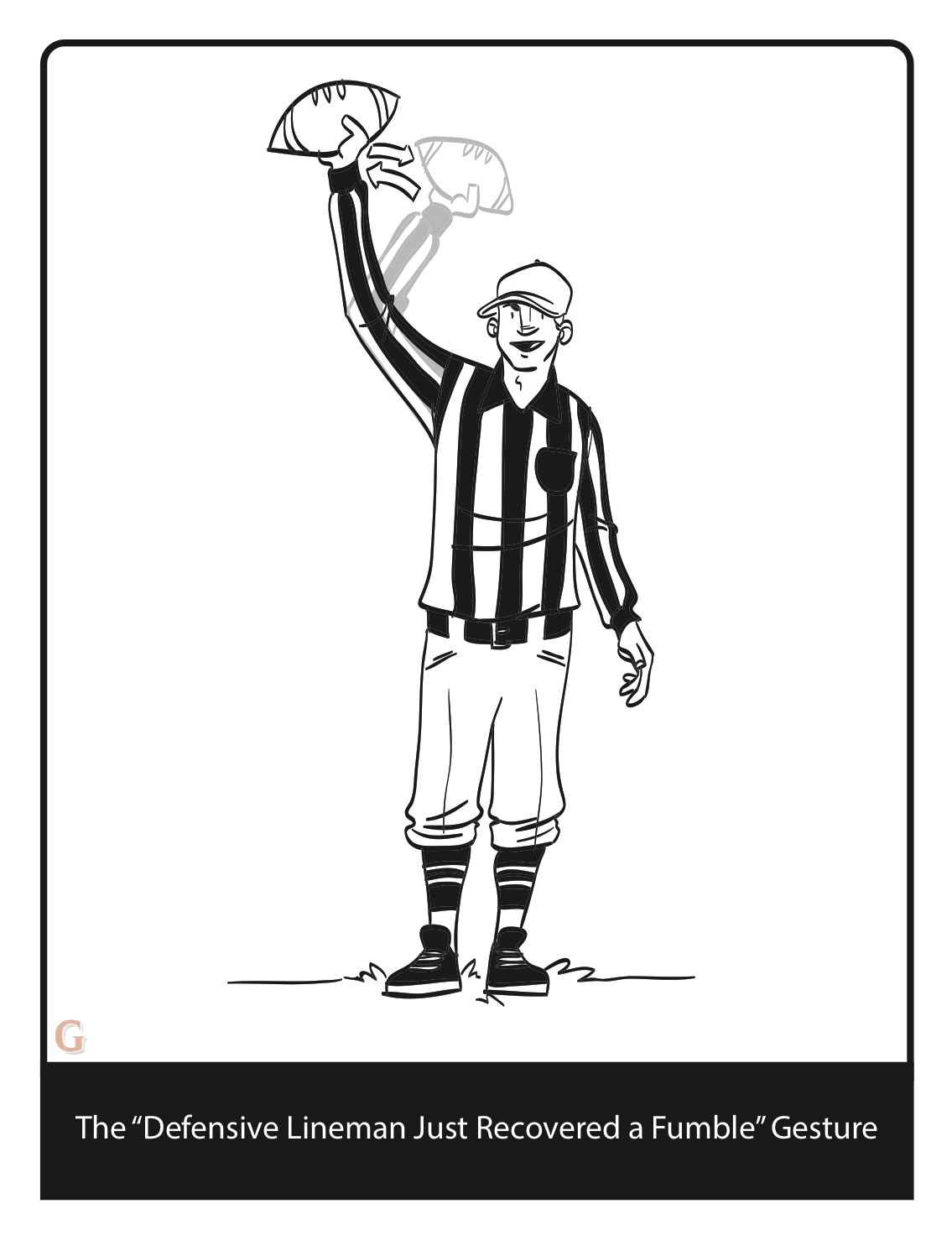 This one is great because there just aren’t many things better than getting to see a very, very large man be very, very excited about having found a ball. Unfortunately, if you see this gesture being made, that means on the opposite sideline you’re likely to see … 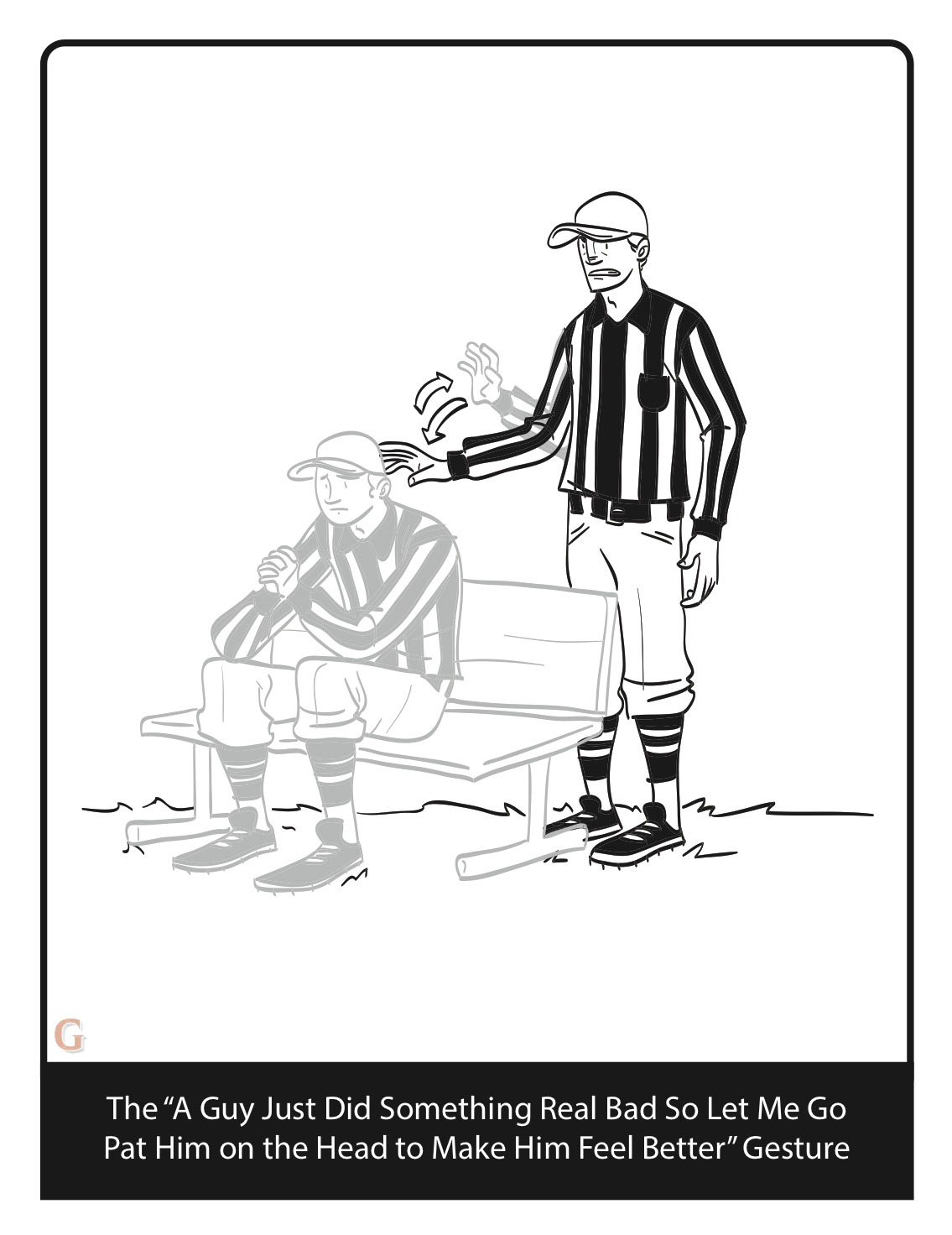 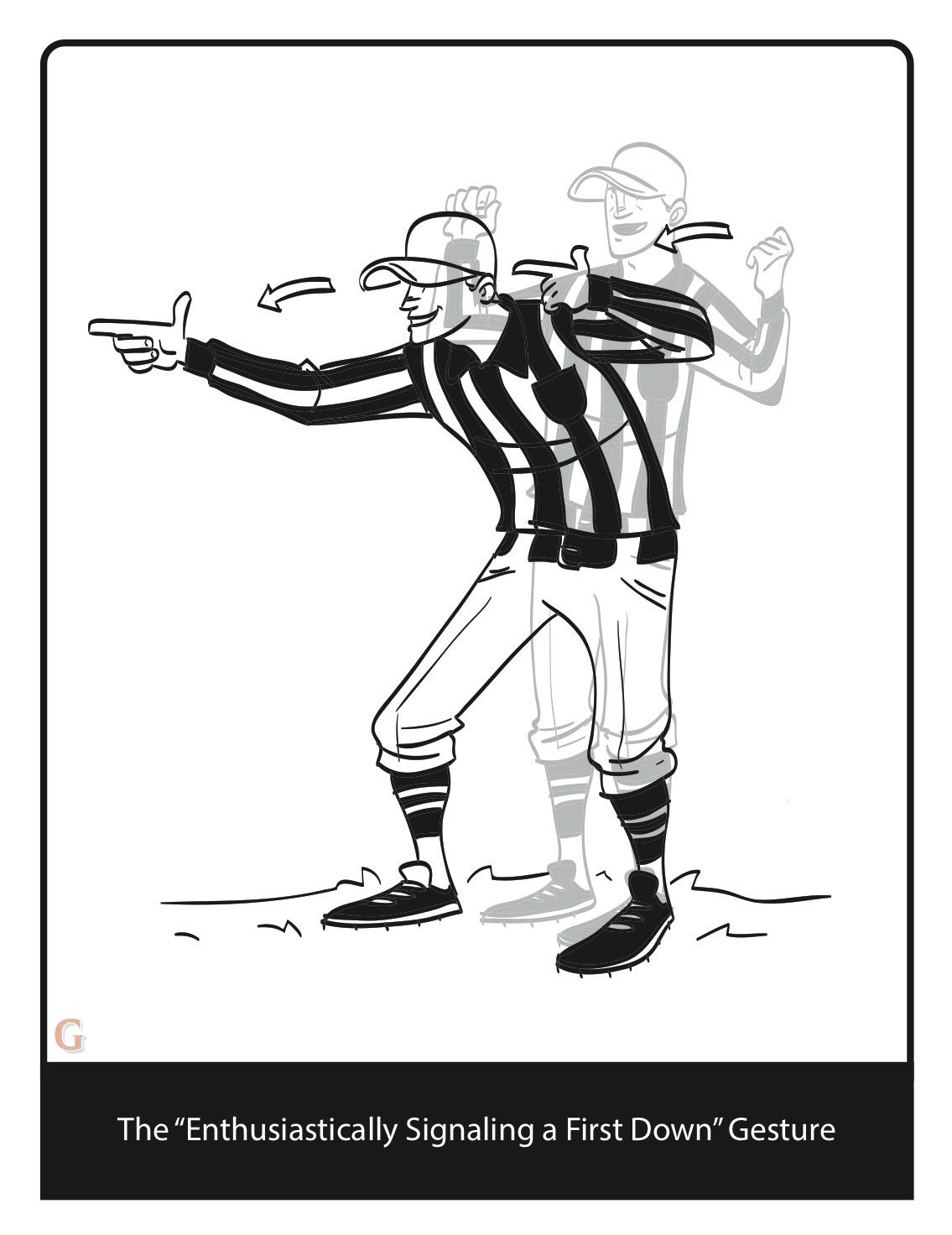 This one is the most recognizable, most enjoyable, all-time best common gesture in the NFL, and there are two reasons it’s so great. The first one is because it’s a co-opting of an actual, real referee gesture. Players taking the rigid spine of the NFL and bending it into something fun, even for something small, is always going to be great. The second reason is because it’s such an open-ended and modifiable celebration. You can add any sort of flourish you want, drench it in attitude or condescension or fury, but so long as you end with that hand pointing forward, everyone knows what it is. Here’s referee Ed Hochuli signaling a first down:

It’s very regal, very sturdy, very unquestionable. Ed Hochuli is so dope because he looks like what I think would happen if someone decided he wanted his body to look like a refrigerator. If I were his friend, I would definitely call him “Ed Hercules.” I’m not his friend, though. That’s sad. I like to imagine Ed Hochuli signaling first downs at random moments during the day, like when he finishes making a sandwich or after a kiss on a first date. It makes me feel better.

The closest a player has ever gotten to replicating the sovereignty of an Ed Hochuli first-down signal is Cam Newton: 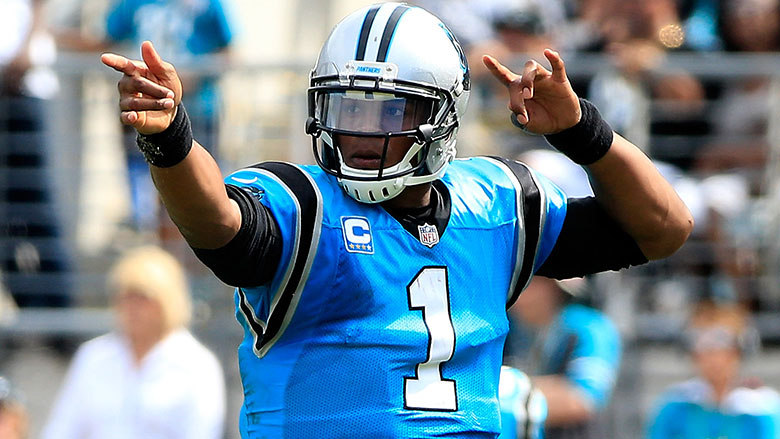 That’s the ideal version of the first-down signal. It should look like that. It should be simple and understated, but also strong and captivating. It should be like the actor Ed Harris, but a signal you make with your hands. That’s what the NFL wants. The players, though, they mostly seem to want something different. 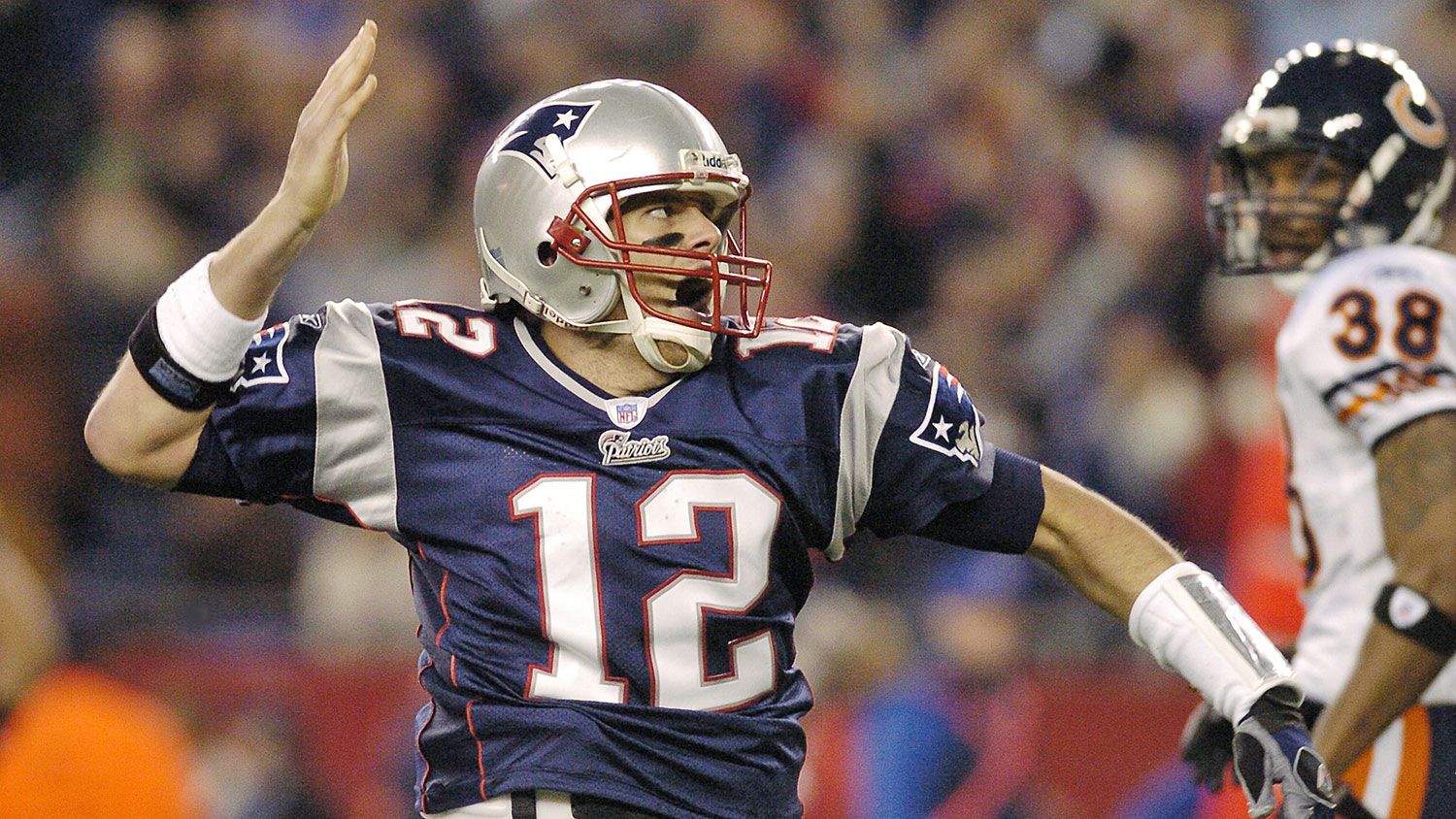 Tom Brady signals a first down like he’s trying to chop an opponent’s sternum in half. A Tom Brady first-down celebration is dangerous because of the velocity it involves, but also because of the stimulation it immediately provides to every male in the Boston area. And let me tell you what: You should treat the prospect of running into a bunch of aroused Bostonians with the same sort of fear and trepidation that Will Smith treated the prospect of running into the night zombies in I Am Legend.

Santonio Holmes signals first downs in the most dismissive way possible. I like this one because of how heartbroken the referee looks that Holmes didn’t hand him the ball. Watch the clip again and only watch the referee. It’s very devastating.

This one is great because, really, the only way to make football any better than it already is, is to include pop-locking, which is what Spikes did here. A semi-funny note: Spikes plays defense. He thought his team had recovered a fumble, and so he was signaling a first down for his offense. Except, his team had not recovered a fumble, so he was just out there break dancing for no real reason.

This is Knowshon Moreno signaling a first down, and it’s the single greatest first-down signal, and I don’t say that with even the tiniest amount of exaggeration or hyperbole:

HE ARMY-CRAWLED A FIRST-DOWN SIGNAL.

We should all aspire to be this creative, this enthused, this virtuosic.