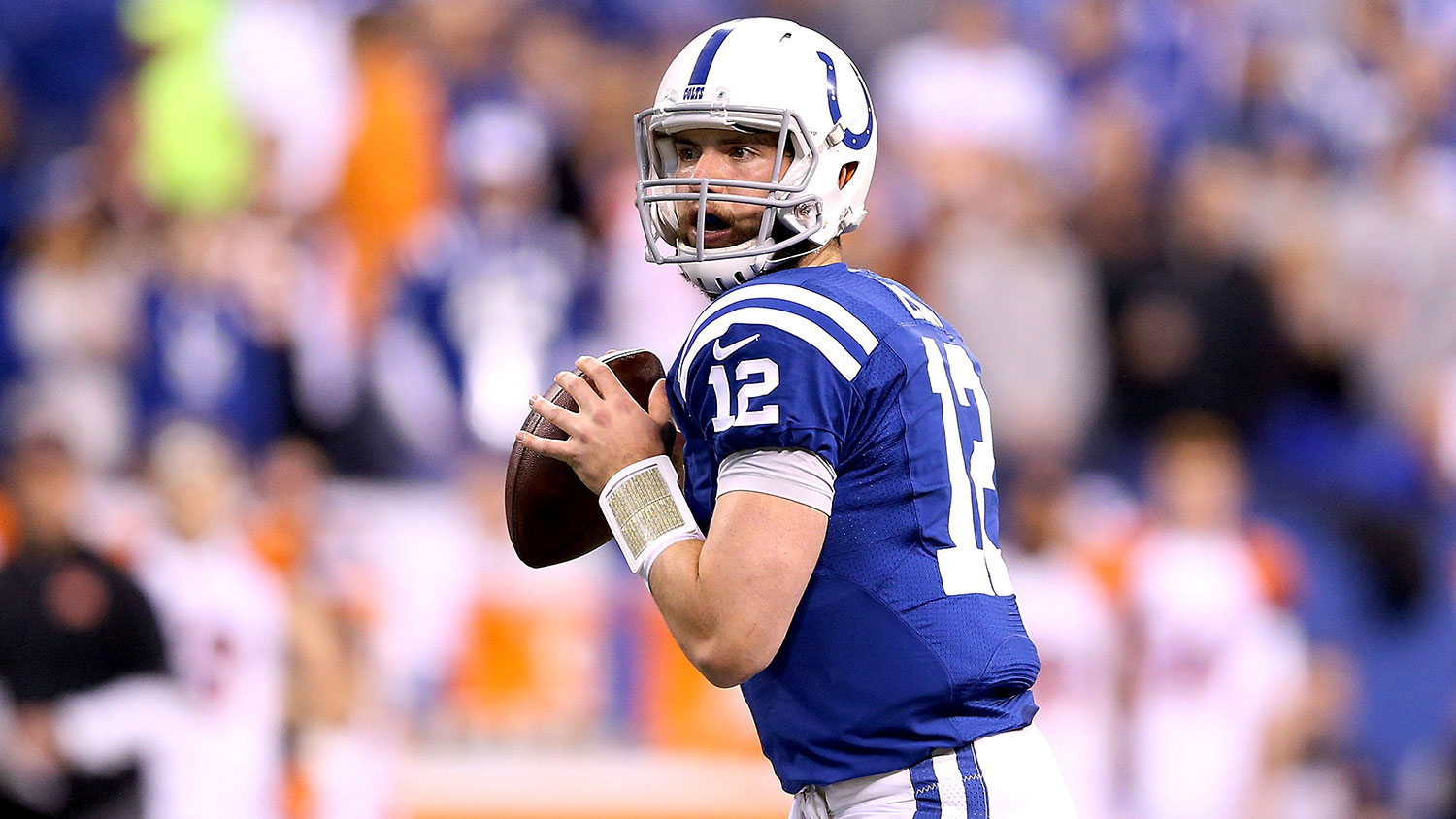 Before he was a defense-destroying heat-check monster winning the MVP and pacing the best team in basketball, Steph Curry was only a defense-destroying heat-check monster making All-Star teams and owning one of the best contracts in the NBA. Curry’s leap was undeniably impressive and fun as hell, but it wasn’t all that hard to believe. Look back to the Curry of two years ago, add in a couple of seasons of steady improvement, an offensively progressive coaching change, and the continued development of a finely tuned supporting cast, and the Curry of today makes sense.

Watching Curry’s rise — from All-Star to something even more — and his run through the playoffs got me thinking: What might the NFL version of this be? Since the pool of players who can actually win the MVP is so small, the one-for-one comparisons are limited in football. The prototype would be something like what Aaron Rodgers did from 2010 to 2011. But a non-quarterback, non–running back hasn’t won the award in my lifetime: Jerry Rice, who has 33 more career touchdowns than any other human ever, was never the MVP of the league. So while a few players could actually follow the Curry path, there are more who could walk along a parallel one: Pro Bowl–caliber players who made a leap to being the best player at their position (think Antonio Brown last year), or even on their side of the ball (think J.J. Watt in 2012). Before getting into the MVP candidates, we’ll start with those guys.

In a way, this is my favorite entry on the entire list, because, like Steph, Beckham has a totally singular skill set, and I think we’re on the brink of him shattering any standard approach a defense would normally take. Even when you move past the ridiculous ball skills, Beckham is already among the best route runners in football. Few guys I’ve ever seen can do the type of damage he does all over the formation. He’s a force on in-breaking routes, he can torch corners on the outside, and he can win balls up high — all of that together shouldn’t be possible.

This is where I remind you that we haven’t even seen a full season of Beckham. And there are plenty of factors that point to Year 2 being even better than his rookie campaign. Even with left tackle William Beatty out for the beginning of the season, I expect the Giants line to be healthier and better than it was a year ago. Shane Vereen gives Eli Manning another quality pass-catching option. And Manning will have another full year in Ben McAdoo’s offense. Considering all of that, I don’t know if there’s any part of this season I’m more excited for than the weekly Odell Beckham show.

I do my best to avoid thinking about it, but every so often, I remember how close the Bears were to getting Donald last May. That 12 players were drafted before him is something we’ll be shaking our heads about for a long time. Like Beckham, we’ve yet to see a full season of Donald, but it had nothing to do with injury. The Rams tried to ease him in last year, until it was clear he needed no easing. The guy was a wrecking ball.

Every week, it seemed like we got another example of “Aaron Donald as Nightcrawler,” suddenly appearing in the backfield to drag down a ballcarrier or terrorize a quarterback. In his rookie season, Donald was already right behind Ndamukong Suh and Gerald McCoy as the best 3-technique defensive tackle in the league. This season, it’s reasonable to believe he could not only leapfrog them but also be in the conversation for Defensive Player of the Year. Donald had nine sacks last season, which is absurd, considering how many snaps he played. He was on the field for 85 more plays than McCoy, who missed three full games, but nearly 122 fewer than Suh. With the rotation the Rams have along their defensive line, he likely won’t see too much more time this year, but all that talent also has its benefits. Donald did much of that damage last season without Chris Long, and now he’ll have Long on the outside along with Nick Fairley next to him on passing downs. We’re looking at a yearlong stream of single blocks against Donald, and no guard on earth can hold up like that for an entire game. This guy is about to ruin everything.

Watching Mack as a rookie was a perfect study in how difficult it is to be a great pass-rusher in the NFL. From the moment he stepped on the field, Mack was clearly on the same physical plane as anyone across from him — and often it seemed like he was on a higher one. That led to him being a dominant run defender, both as a penetrator and in setting the edge, but by season’s end, his pass-rush numbers were pretty forgettable.

It’s not hard to imagine that changing this year. The difference between a hit or a sack and nothing at all is a half-step, and finding that half-step can happen between a first and second season. Jumping from four sacks to, say, 12 wouldn’t be at all surprising. He could have a Von Miller type of impact sooner than we think.

It’s easy to follow the thinking with this one: Take a 24-year-old corner who was already among the best in football and pair him with a coach who’s been deploying Richard Sherman for the past two years. Dan Quinn may not be bringing secondary coach Kris Richard1 or Pete Carroll with him, but he knows how to use a guy with Trufant’s skill set. Seattle’s brand of Cover 3 — which Quinn is expected to employ in Atlanta — mimics man coverage enough that it truly lets a shutdown corner shine, and Trufant has a chance to do just that this year. While he doesn’t have the length that we’ve seen from other corners in this defense — although he’s 6 feet tall, his arms are on the shorter side — Trufant still manned up on some of the monsters in the NFC (Mike Evans, Kelvin Benjamin, Alshon Jeffery) last year, and he has always played bigger than his frame. Atlanta has a Thursday-night game against the Saints in Week 6. I won’t be shocked if, early in the game, we get one of those “Thrown to, catches allowed” graphics for Trufant from the first five games and the numbers don’t even look real. 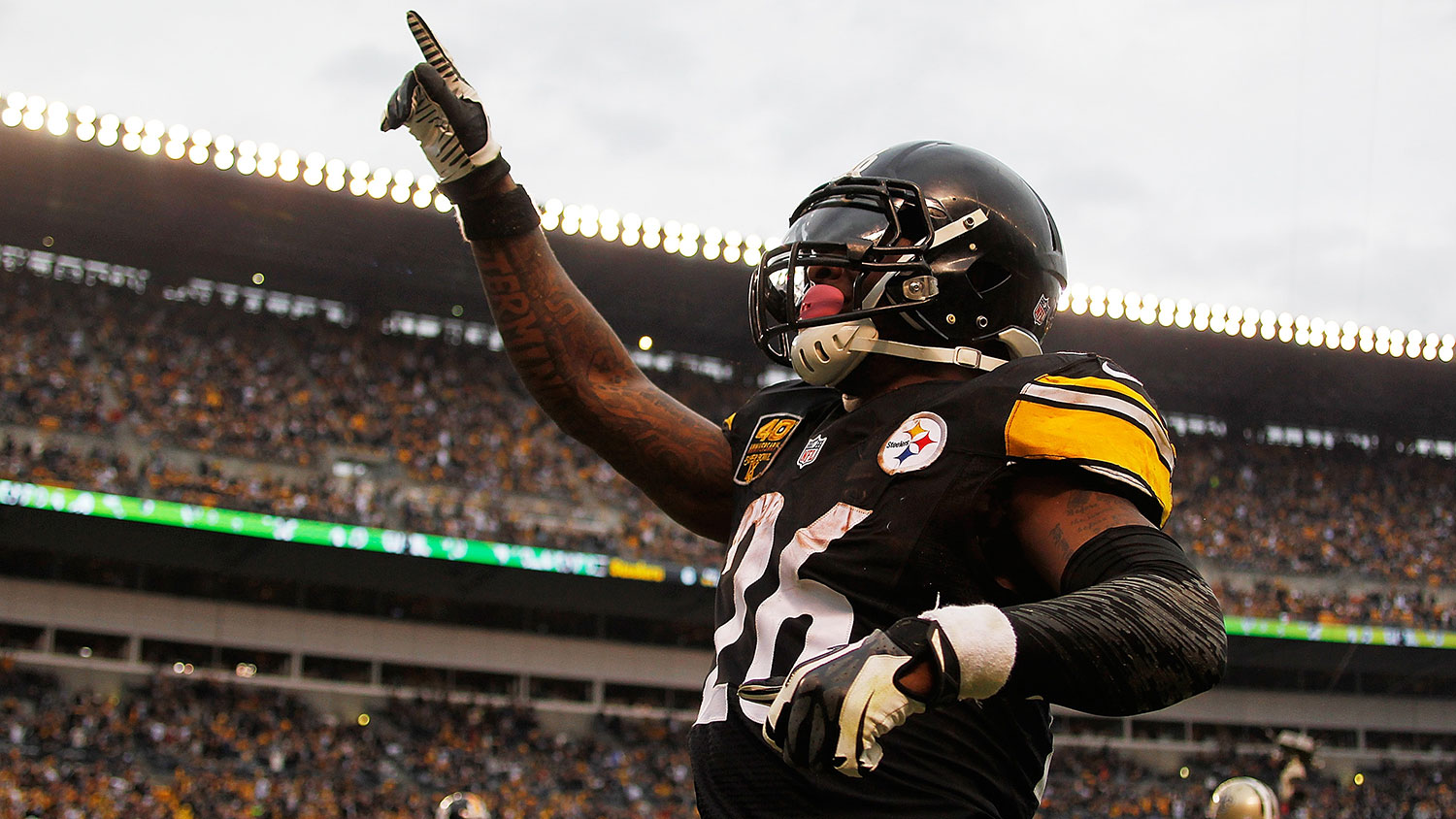 If his three-game suspension holds up, there’s almost no way Bell could actually win the award, but on a per-game basis, it’s possible to imagine him being the best player in football this year. Whatever you think Bell’s numbers were last year, I’m willing to bet they were better than you imagined. He rushed for 1,361 yards on just 290 carries while also catching 83 passes (!) for 854 yards. I’m not great at math, but I’m pretty sure that comes out to 2,215 yards from scrimmage. He’s an incredibly potent dual threat, and there’s really no reason to think we won’t see more of the same this year.

In 2014, Pittsburgh’s offense finished second in DVOA, and they return completely intact. All they did was add 7-foot-6 Sammie Coates2 to go along with touchdown machine Martavis Bryant on the outside. Last year was the first season in forever when the Steelers’ offensive line wasn’t hit by the plague, and it’s unlikely that they’ll have that stretch of inury luck again. If it all does break right, though, this has a chance to be the best offense in the league, and no running back in football is a more vital piece to a top-tier offense than Bell is to the Steelers. Be ready for everyone to wildly overrate the suspension and take him three picks too late in your fantasy draft.

This might seem like a stretch, especially after what I wrote about Newton yesterday, but if we’re considering players — like Curry — who have the ability to put together a lights-out season, Newton has to be in the conversation. Aside from Cam’s rookie year, the Panthers have never had a volume of passes high enough for Newton to put up the numbers we typically get from an MVP, but let’s try to picture the kind of year that would put him in the conversation for the award:

Michael Oher and whoever plays right tackle aren’t great but still give him better protection than he had a year ago. He avoids getting nicked up all season, and with better protection, the arrival of Devin Funchess, growth from Kelvin Benjamin, and a full season of Corey Brown, Newton completes 64 percent of his 450 attempts and throws for 3,600 yards and 28 touchdowns. No pieces of Jonathan Stewart fall off, and the Panthers running game is dynamic enough that Newton adds another 700 rushing yards and 13 touchdowns. Carolina’s defense gets back near the top five, and the Panthers win 11 games and the division.

C’mon. It could happen! It probably won’t! But it could!

This almost feels like cheating. Even with all the signs pointing to a big jump for the Warriors this year, Curry still wasn’t the MVP favorite when the season began. But when the NFL odds come out, there’s a good chance Luck is at the top, right alongside Aaron Rodgers.

Bovada released its over/under win numbers earlier this week, and after their big offseason, the Colts were tied for the highest win total: 11, with both the Packers and the Seahawks. Similar to the situation in Pittsburgh, the Packers return every piece of their league-best offense from a year ago, and they also added multitalented, sure-to-be-the-next-guy-to-ruin-my-life receiver Ty Montgomery in the third round of the draft. But also like the Steelers, Green Bay enjoyed some rare health luck along their offensive line. A slight step back from the Packers’ offense is to be expected, but even if it does all click again for Rodgers & Co., MVP fatigue is real.

Rewarding the new guy is always appealing, and this really does feel like the culmination of what we’ve been waiting for with Luck for the past three years. The Colts went big this offseason, and with the offseason arrivals of Andre Johnson, Frank Gore, and Phillip Dorsett, the armory Luck has at his disposal is getting ridiculous. It doesn’t take much imagination to envision him scratching the 5,000-yard mark while sniffing 50 touchdowns as Indy wins 12 games. We want the phenom to match our impossible expectations, and plenty of signs point to this being the season in which Luck does that and maybe even more.