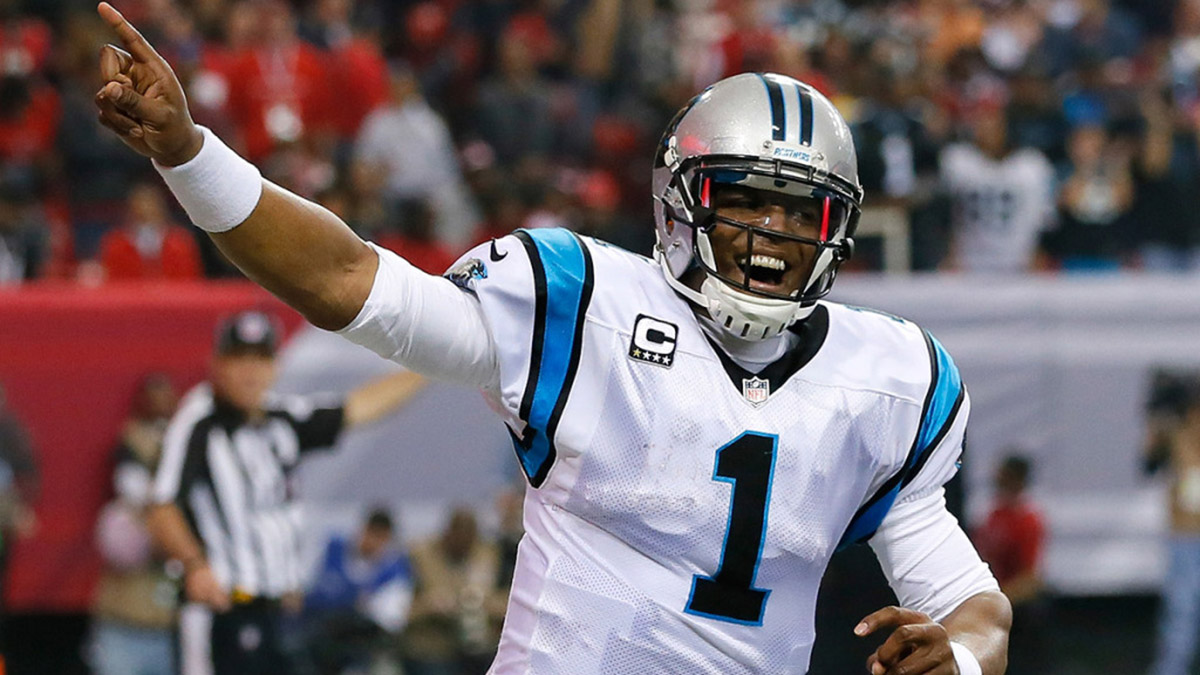 You could say that Cam Newton was smiling like someone who’d just (potentially) made more than $100 million, but really, he was smiling the way Cam Newton is always smiling. After rumblings about a new deal started earlier this week, the Panthers finally handed Newton the massive extension: $103.76 million over five years, including a $67.6 million payout in the first three years, according to Adam Schefter, who also reported that with a $22.5 million signing bonus, a roster bonus, and his base salary, Newton will make $31 million this season.

Over the life of the deal, Newton’s yearly cap hit averages $20.76 million, among the highest in the league but still short of the highest quarterback tier that’s paced by Aaron Rodgers’s $22 million a year. All of those numbers are just a complicated way to show that Newton is getting paid like one of the best quarterbacks in football.

Anyone looking to question whether he deserves to be has plenty of ammunition. Since Newton came into the league in 2011, his QBR is 55.8 — the 16th-best in football, right behind Jay Cutler and in front of Joe Flacco. Thirteen quarterbacks have thrown more touchdowns, including Andrew Luck, who was drafted a year after Newton. The ways in which we traditionally evaluate a quarterback just don’t add up in Newton’s favor. But part of Newton’s appeal is that he isn’t a traditional quarterback. No quarterback in NFL history had more rushing yards in his first four seasons than Newton’s 2,571, and since the start of 2011, only three players — Marshawn Lynch, Arian Foster, and Adrian Peterson — have more rushing touchdowns. The weapon he becomes near the goal line is nearly impossible to replicate. The Panthers rank fifth in goal-to-go touchdown efficiency the past four seasons, punching the ball in 73.1 percent of those possessions. Carolina drafted Newton to be the centerpiece of the franchise, and despite some average passing numbers in comparison to the others making (or about to make) this kind of money, he has been just that.

The first argument for the pro-Newton crowd: Look how little he’s had to work with during his short career. As a rookie, when Newton topped 4,000 yards passing, he had the benefit of playing with Steve Smith just as Smith reached the tail end of his best years. But the other options on the outside left a lot to be desired. Carolina’s no. 2 wide receiver that year, in terms of receptions, was Legedu Naanee. For the next two seasons, Brandon LaFell stepped into that role, with players like Louis Murphy and Ted Ginn assuming no. 3 duties. It took losing Smith for Carolina to draft a receiver early — but even with Kelvin Benjamin, the Panthers were forced to go with Jerricho Cotchery on the other side for most of last season. Even if you concede that tight end Greg Olsen is actually Carolina’s no. 2 receiver and has been for a while, each of these groups leaves a lot to be desired.

Part of the reason the Panthers have been shorthanded on the outside is the hefty price tags hanging off the members of their backfield. Former general manager Marty Hurney’s affinity for running backs has been well documented, and since he took over, new GM Dave Gettleman has been telling anyone who would listen that his team was in deep salary-cap shit. This is really the first season when the Panthers have made it out from the financial ditch dug during the Hurney era, and the realities of their money situation were on full display last year. According to ESPN Stats & Info, the Panthers committed just $16.3 million to their offensive line, the seventh-lowest total in the NFL. And it showed. At times, Newton — who played with two transverse process fractures in his back following a December car accident — really took a beating.

The surprising retirement of left tackle Jordan Gross (who went to the Pro Bowl in 2013) before last season didn’t help matters, but even with Gross on the roster, offensive tackle was a position of need entering 2014. That’s the thing with Gettleman, though — he’s long stated that reaching for need isn’t his priority. By necessity, the Panthers have been forced to seek out bargains in free agency, but even in the draft, Carolina has been willing to fortify positions of strength rather than scrambling to fill spots that could use some improving. Rather than take an offensive linemen or another receiver in last year’s second round, the Panthers drafted defensive end Kony Ealy. In the first round this year, Carolina passed on an offensive tackle in favor of linebacker Shaq Thompson. It’s an approach that requires a long-term perspective on roster building, and that type of foresight can work. With Charles Johnson getting older and Greg Hardy gone, Ealy figures to play a major role in his second year. Still, there are some teams that have found a quarterback of Newton’s caliber and have seemingly done everything they can to surround him with every possible advantage — just this year, the Colts added Phillip Dorsett to an already crowded group of receivers.

Carolina has been content to stick with its process, leaning on Newton’s abilities rather than doing everything it can to enhance them. As Thompson learns at the feet of Thomas Davis this year and plays some scattered dime linebacker, Michael Oher, in his third stop (including just one season in Tennessee), and Mike Remmers, on his sixth team after going undrafted in 2012, will be the tackles tasked with protecting the Panthers’ $100 million man.

The Panthers have made some moves that figure to benefit Newton. After taking Benjamin in the first round last year, Carolina added another tree on the outside in the form of Devin Funchess. With Benjamin, Funchess, Olsen, and the intriguing Corey Brown1 rounding out the Panthers’ receiving corps, there’s a chance Newton has the most he’s ever had to work with. And if running back Jonathan Stewart can stay healthy (I know, I know), he showed flashes toward the end of last season that he can be the sort of back the Panthers had always hoped.

But even the way Carolina has built its receiving corps points to its unique brand of solving problems at one spot by covering them up at another. When Newton misses as a passer, it’s often because he’s sailed a ball high. That becomes less of an issue with an NBA-sized frontcourt at your wide receiver spots. But another way of limiting those throws is by giving Newton solid protection, which is unlikely for the second year in a row. At times, the Panthers’ thinking when it comes to the quarterback they just paid like one of the best in football is that they’re content to let his talent be the rising tide for the entire offense. And for the most part, it has been. But carrying an entire offense on your back eventually becomes too much burden to bear. The Panthers just paid a top-five salary to one of the better quarterbacks in football, and if they want to see him upright for the duration of the contract, it might be time to rethink the very nature of their team-building.