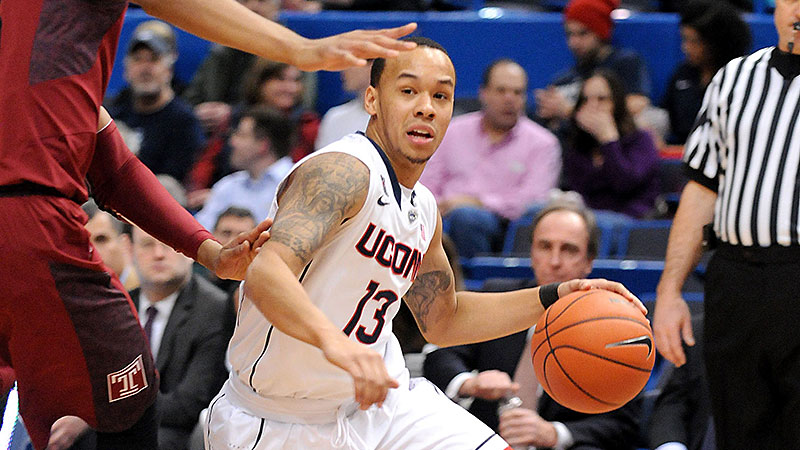 Who Is He? Shabazz Napier, 6-foot-1 point guard for UConn

Where Is He From? Roxbury, Massachusetts

His Game in 30 Words or Fewer: Napier, along with juniors DeAndre Daniels and Ryan Boatright, returned to Storrs to get back in the tournament. COMMITTED.

You Might Know Him From: Like any senior in college basketball who has played meaningful minutes since stepping on campus, it feels like Shabazz Napier has been playing at UConn for a few months short of 30 years. Last year, he was college’s best Shabazz. He’s hit a crapload of big shots for UConn in his four years and will lead the sneaky, experienced 7-seed Huskies into the tournament.

His acceptance speech for AAC MVP was thoughtful and touching:

Great Moments in Social Media History: Napier does not have Twitter or Facebook. But he has an Instagram, which reveals that he is a total sweetheart.

He is good friends with Huskies center Stefanie Dolson, who does not believe in the tenant of #NoNewFriends:

Off the Court: According to the Napier legend, Shabazz leaves four tickets at will call every game: one for his mother, two for friends, and one for Ernest Likely, a friend who was murdered in 2011.

Though Napier is close with his mother, they struggled financially and he lived with family friend Will Blalock’s family until Blalock headed to Iowa State when Napier was 12.

So Why Should You Know Him? Shabazz Napier, frankly speaking, has the right stuff; as UConn’s leader, he’s crafty, smart, and versatile, and there are few people in the 2014 field you’d rather have taking the last shot. Of the 10 triple-doubles in UConn history, Napier has two (he’s the only Husky who can say that), one of which came against Yale earlier this season.