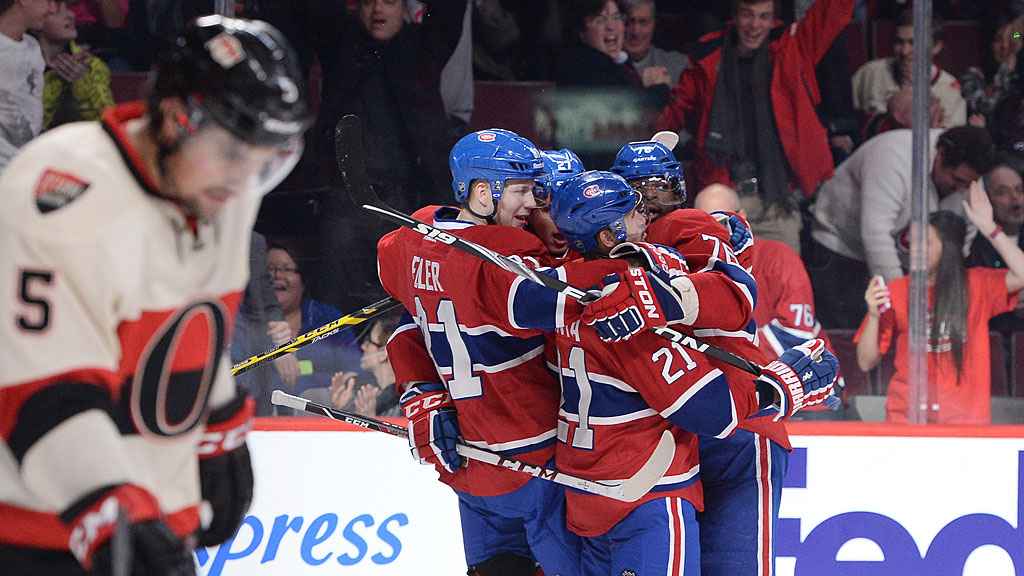 The weekend’s most entertaining matchup was Saturday night’s contest between the Senators and Canadiens in Montreal, though you wouldn’t know it if you’d turned the game off once Ottawa had locked up the win.

And that win really did seem locked up, with Ottawa holding a 4-1 lead with four minutes to play in regulation. Fans like to get dramatic and talk about teams pulling off unheard-of comebacks, but in this case it’s not hyperbole: No team in the history of the league had ever won a game in which it had trailed by three with less than five minutes to play.

Until Saturday night, that is, when the Canadiens stormed back for a win that was both unprecedented and controversial. Lars Eller closed the gap to 4-2 with under four minutes left, and Brian Gionta made it 4-3 with two remaining. A late penalty to Ottawa’s Kyle Turris sent Montreal to the power play and set up a furious final minute. After a frantic scramble in front of Sens goalie Robin Lehner, P.K. Subban somehow had the presence of mind to find an open David Desharnais with a pass with time about to expire, and the center buried it with just 0.3 seconds left on the clock.

The Senators were furious with the goal, arguing that Lehner had been bumped out of position seconds earlier. They weren’t any happier with Francis Bouillon’s overtime game winner, which came on another scramble after Lehner thought he’d frozen the puck. Referee Eric Furlatt was in good position and ruled that the puck had never been covered, but the Senators protested wildly, with Bobby Ryan having to be restrained from going after the officials.

From Ottawa’s perspective, the loss can only be described as crushing. While the Senators can take some consolation in picking up a loser point, they need every win they can get if they’re going to have any hope of making a playoff push. They took yet another loss Sunday, this time falling 3-1 to the Avalanche, and now sit seven points back of a wild-card spot with four teams to pass. They’re basically done.

For Montreal, the crazy finish partially overshadowed the return of Carey Price, who played for the first time since the Olympics after recovering from a leg injury. (Backup Dustin Tokarski got the start Sunday night in Buffalo, and earned his first career shutout in a 2-0 win.) With their star goaltender healthy again and a seven-point cushion in the wild-card race, the Habs are now all but assured of a playoff spot.

We got a double dose of one of the league’s best rivalries on the weekend, as the Penguins and Flyers faced off in an old-fashioned home-and-home. The state rivals have met in the playoffs three times since 2008, most memorably during a 2012 series that featured ridiculous amounts of both offense and bad blood. They could be headed toward a rematch in this year’s first round. (Although it’s not as likely as you might think — we’ll explain why down below.)

In Saturday’s opener, the Flyers dominated the Penguins, outshooting them 40-25 on their way to a 4-0 win. Scott Hartnell’s power-play goal less than four minutes in stood up as the winner, with Matt Read scoring a pair and Vincent Lecavalier adding one. Steve Mason earned the shutout.

Sunday’s rematch in Pittsburgh appeared to be following the same script, with the Flyers jumping out to an early 3-0 lead and chasing Penguins starter Marc-Andre Fleury. But the Penguins clawed back, narrowing the gap to 4-3 by the end of the second. That’s how it stayed, though, as the Flyers survived a Sidney Crosby near-miss in the dying seconds to earn the weekend sweep.

The losses put a dent in the Penguins’ chances of catching the Bruins for the top seed in the East, but otherwise won’t hurt them much — they still hold a 15-point lead on top of the Metro. But the four points will be critical to the Flyers’ playoffs hopes, moving them all the way up to second in the division, one up on both the Blue Jackets and Rangers. Suddenly, a team that’s been life-and-death to make the playoffs all season long might be looking at home-ice advantage in the first round.

But first, they’ll have to get through a tough homestand that sees them welcoming four current Western Conference playoff teams in the Hawks, Stars, Blues, and Kings.

We’re now four weeks from the start of the playoffs, and the debut of this year’s new division and wild-card-based format. So now seems like a good time for a reminder that there’s a very good chance you don’t understand how the new system works.

Most fans know the basics: The top three teams in each division are in, with two wild-card spots in each conference going to the remaining teams with the best record. That obviously necessitates some sort of crossover system, since there’s a chance both wild cards could come from the same division.

But whenever this subject comes up, it becomes clear than many fans assume that the crossover only kicks in under those specific circumstances — that if five teams from one division all make the playoffs, the fifth will be shuffled over to the other division for the first round. If each division sends four teams, the assumption goes, then we just get the usual 1 vs. 4 and 2 vs. 3. But that’s not actually true; the rules are slightly more complicated, and could lead to some unexpected results.

Here’s how it really works: Each division’s second and third seeds play each other, no matter what. But the top seeds in each division play a wild-card team, with the division winner with the most points playing whichever wild-card team has the fewest. That system applies even if each division sends four teams to the playoffs, meaning there’s a good chance that both wild-card teams will crossover — in essence, trading divisions for the opening round.

Late last week, we saw what would have to be just about the worst-case scenario for the new format. On Friday, the Metro Division’s top seed was the Penguins, and their fourth seed was the Flyers. In the Atlantic, the Bruins were no. 1 and the Canadiens were no. 4. Many fans would look at those standings and assume they were on track to see first-round matchups featuring Flyers/Penguins and Bruins/Habs — two of the best rivalries in the entire league.

Not so fast. Because Boston had more points than Pittsburgh and Philadelphia had fewer than Montreal, the Flyers and Habs would have both been crossover teams. The Canadiens would have joined the Metro bracket and played the Pens, with the Flyers becoming an Atlantic entry and facing the Bruins.

It’s honestly not as complicated as it can sound, and if you’re ever unclear about who’s on track to face who, you can always just check this handy listing. But based on the surprised reaction I’ve heard from fans whenever the subject has come up, the NHL may want to cross its fingers that there won’t be any surprises in this year’s matchups.

(And in case you were wondering: Yes, those crossover teams stay in their new divisions for the second round, too. A team could end up “winning” a division it’s not even in. Only in the NHL.)

• Washington Capitals prospect Evgeny Kuznetsov has finally arrived in the NHL, and it didn’t take him long to make an impact. On Friday, he recorded three assists in a 4-3 win over the Canucks, becoming the first player in almost eight years to have that many helpers so early in his career. Also, this happened. Your guess is as good as mine.

• The Ducks edged the Kings 2-1 on Saturday and beat Colorado 6-4 Friday. The two-win weekend snapped a four-game losing streak and temporarily quieted the critics who view Anaheim as a lucky team ripe for an inevitable regression.

• Saturday’s win also left Anaheim two points back of St. Louis for first place overall. The Blues have continued to roll, as has newly acquired goalie Ryan Miller, and they can become the first team to crack the 100-point mark tonight when they host the Jets.

• It was an interesting weekend for Panthers goalie Roberto Luongo. On Friday he faced the Devils and Cory Schneider, outdueling his former teammate to earn a 5-3 Florida win. On Sunday he faced the Canucks, dropping a 4-3 shootout decision to the team that traded him two weeks ago.

• The Blackhawks snapped a two-game mini losing streak with a 3-1 win over the Red Wings, but remain stuck third in the Central. Chicago could get some late-season help from rookie Teuvo Teravainen, who could join the team now that his Finnish season is over.

• The loss kept the Red Wings three points back in the Eastern wild-card race. With their 22-year playoff streak in serious jeopardy, they’ll host the Maple Leafs in a crucial game Tuesday night.

• The Bruins smoked the Hurricanes 5-1 on Saturday and have now won eight straight. They’ve opened up a three-point lead on the Penguins for top spot in the East.

• The Sharks also kept a long win streak intact, beating the Rangers 1-0 on Sunday to run their string to six straight. San Jose is tied with Anaheim at 97 points, but the Ducks hold a big edge in regulation/overtime wins column, which is the first tiebreaker.

• We’ve got some must-see TV to look forward to Tuesday night, as Patrick Roy returns to Montreal for the first time as an NHL head coach.

• The toughest loss by a bubble team may have come Sunday night, when the Stars were blown out 7-2 by the Jets. Dallas is tied with Phoenix for the final wild-card spot, and had to think it could bank at least a point off the struggling Jets.