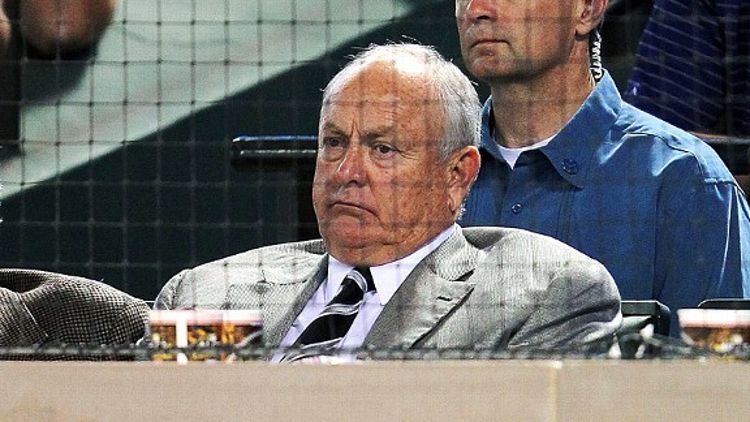 Do you know who owns the Texas Rangers? Seriously, we’re really asking. Because so far, this is all we’ve got:

a) George W. Bush was involved (at some point there)
b) but not Mark Cuban (not ever)
c) and now it’s not just Nolan Ryan (This probably comes as a surprise to anyone who has spent the 2011 World Series carefully tracking the Frowns of Nolan Ryan.)

It turns out the Rangers ownership is a complex and complicated saga. After about 198 hours of research, here’s what we’ve figured out:

October 1988: George W. Bush, then a 42-year-old Texas oilman and member of his father’s campaign team for the 1988 presidential election, learns that Eddie Chiles is interested in selling the Texas Rangers.

January 1989: Reports surface that a group headed by Bush and Cincinnati oilman Bill DeWitt Jr. plan to issue a letter of intent to purchase a majority share of the team.

March 1989: Bush announces that a group led by him and partners Rusty Rose and Richard Rainwater have purchased the team for an undisclosed sum (later reported as $89 million). Bush’s financial investment is reported to be $500,000.

October 1990: The Rangers announce that they have reached an agreement with the city of Arlington, Texas, on a $165 million stadium that will keep the Rangers in Arlington for the next 40 years. One-hundred thirty-five million dollars of the total would come from a city-created finance authority, and an Opening Day 1994 goal is set for completion.

January 1991: A tax increase to provide the $135 million in public funds is voted through with 65 percent in favor of the proposal.

September 1993: Bush announces plans to run for governor of Texas.

December 1994: Bush resigns as the team’s CEO but maintains his ownership stake.

June 1998: Billionaire and Dallas Stars owner Tom Hicks purchases the Rangers for $250 million, the second-highest price ever for a MLB team. With the escalator bonus from his original purchase, Bush nets almost $15 million from the sale.

December 11, 2000: Texas signs Alex Rodriguez to a 10-year, $252 million contract that more than doubles the richest deal in the history of sports.

February 2007: Hicks purchases half the ownership stake of the Liverpool Football Club for $200 million.

March 25, 2009: Hicks announces that he is seeking “minority investors to come back into the ownership of the Rangers as a way to be prudent in a bad economy.” Claiming that his ownership stake had gone from 55 percent in 1998 to 95 percent, Hicks says that he is willing to sell up to 49 percent of the club but wishes to maintain majority ownership.

April 3, 2009: Hicks Sports Group defaults on $525 million worth of loans, a move Hicks says was intentionally made to help in the negotiating process with several banks. “Like so many other companies and institutions, HSG has been impacted by a global credit crisis which no one could have anticipated,” Hicks said in a statement.

May 28, 2009: Hicks says he is willing to sell majority stake in team “if the right deal comes along.”

November 2009: Days before the deadline for formal proposals, Hicks announces that he is trying to team with local investors, including former Dallas Cowboys Roger Staubach, to assemble a financial plan that would allow him to maintain a controlling interest in the team. Despite being named as a potential investor, reports surface that Ryan will resign if Hicks remains as the owner.

December 15, 2009: Following the collapse of Hicks’ efforts to retain control, he grants the group led by Greenberg and Ryan exclusive negotiating rights.

January 24, 2010: The group led by Greenberg and Ryan, aptly named the Rangers Baseball Express, agrees to purchase the team for $575 million. Reports are that the ownership group is comprised of 18 people, and the significant chunk of the money is being provided by the chairman of XTO Energy (just sold to Exxon Mobil for $41 billion) Bob Simpson and billionaire Ray Davis, the retired CEO of Dallas-based Energy Transfer Partners. The groups hope to have the ownership transferred by Opening Day.

March 2010: The sale is delayed by protests from about 40 lenders led by hedge fund Monarch Alternative Capital claiming that Hicks would owe them a combined $300 million from the sale of the team.

April 2010: MLB takes control of the sale and begins negotiating with several of the banks to allow the sale of the team to move through. If MLB seizes control of the team, lenders holding the $525 million in debts retain the option to force the case into bankruptcy court, putting a possible auction into play and opening the proceedings to other potential buyers.

May 24, 2010: Rangers file for bankruptcy in attempt to force the sale of the team through. The plan includes a provision stating that Hicks would pay the $75 million comprising the club’s debt. Several lenders attack the proposal, as well as the potential purchase by Greenberg and Ryan after claiming that MLB was making efforts to award the team to the group despite them not making the highest bid.

June 28, 2010: Both Houston businessman Jim Crane and Dallas investor Jeff Beck are identified as potential buyers when reports surface that each contacted creditors to express interest in purchasing the team.

July 2, 2010: A court-appointed restructuring officer recommends a one-day auction as a means of selling the team. Date for the auction is tentatively set for July 16.

July 16, 2010: Mark Cuban confirms his interest in acquiring the team.

August 4, 2010: Cuban’s first bid comes in $25.3 million in cash higher than Greenberg and Ryan’s initial offer. Greenberg responds with a $2 million increase that Cuban then trumps by $15 million.

Aug. 12, 2010: MLB teams vote unanimously to approve the sale of the team. The sale is officially complete, and the team has exited bankruptcy.

October 5, 2010: All 18 members of the ownership group are revealed, with Davis and Simpson listed as the franchise’s co-chairmen.

March 11, 2011: Chuck Greenberg resigns as Rangers CEO. The move comes with a statement from Davis and Simpson that does not contain any specific reason for the decision. Reports start to surface that several incidences over the course of Greenberg’s short tenure caused friction between him and Ryan, including but not limited to Greenberg’s hesitation to resign GM Jon Daniels and Greenberg’s increased involvement in daily discussions during the winter meetings.