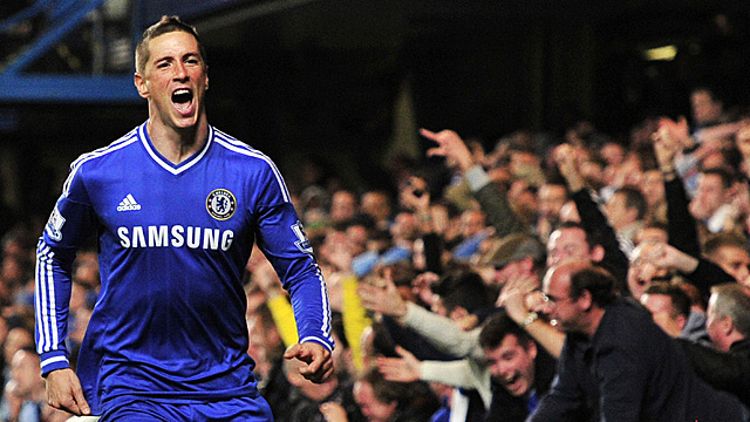 Now well into his third season at Chelsea, some are still waiting for the time when Fernando Torres goes back to being the player he was at Liverpool. And with three goals and an assist over two games last week, including a stunning late poached goal to beat Manchester City, Chelsea fans are hoping that time is now. But that misses the point. The focus shouldn’t be on whether Torres can revert to form, but rather on the player into which he is evolving. Because that player happens to be the ideal striker for Jose Mourinho’s system. In order to understand how he fits in the current squad, it’s important to look at what Torres was, what he is now, and how Mourinho is using him.

At his best, Torres was a sublime athletic specimen. He averaged .82 goals per 90 minutes over his three and a half Premier League seasons at Anfield. Even when he was at the peak of his physical powers, though, Torres wasn’t really able to stay on the field consistently. Torres didn’t top 2,700 minutes in a Premier League season until the year he was sold to Chelsea, when between the London and Merseyside clubs he managed to rack up 2,825 minutes. When he was on the field, he was electric, but all too often a host of knee and hamstring problems would sideline him for weeks at a time.

It’s easy to forget the time Torres spent off the field, injured, because of how memorable he was when he did play. Those Liverpool squads, built by manager Rafa Benitez, were engineered to take advantage of what Torres did well. He augmented his strength and speed with an uncanny ability to beat defensive lines. Look at any of the numerous YouTube highlight reels for Torres and a pattern emerges.

Torres scored goals like a traditional striker. The vast majority of his goals fell into three categories: getting on the end of crosses, beating a defensive back line to run onto a through ball, or peeling off the back line to receive a pass and then running at a defender.

It was the combination of movement and athleticism that made Torres unique. Time and again defenders would corral him into positions that seemed safe, only to watch him somehow escape and bury the ball in the net from an impossible angle. Usually, for an attacker, running the channels outside a central defender and inside a fullback is an exercise in industry, not glory. Forwards run onto long balls and get ushered toward the corner as they wait for support from teammates. Torres would routinely pick up those balls in the channel and turn them into spectacular goals.

What you didn’t see in any of Torres’s goals were the clever little interplays that have become commonplace among many of Europe’s top teams. He wasn’t playing one-twos with midfielders cutting inside, or slipping on the end of little dinks in crowded penalty boxes. He was a one-man show, taking advantage of large swaths of space, space that he often created for himself.

Torres will turn 30 this year. Ironically, now that he’s at an age when a decline in his immense physical skills is natural, he’s finally managing to stay on the field. Last season, across all competitions for Chelsea, he played in an astounding 64 games. He also managed 22 goals, which nobody really noticed because only eight of them came in the Premier League. While that only equates to .43 goals per 90 minutes, well short of his Liverpool highs, it is a very respectable average. Coming into this season, the idea that Torres was a mess was pretty exaggerated. Torres wasn’t awful, he just wasn’t great. Granted, that isn’t what you want from a striker for whom you paid 50 million pounds.

As injuries slowed him down, Torres lost the ability to beat the last defender. He couldn’t turn the space he created for himself into a spectacular goal. Gradually, over each of the last three seasons, he began taking on fewer defenders. His attempted dribbles dropped every year, starting when he moved to Chelsea, from 4.4 in 2010-11 to 4.0 in 2011-12 to 3.4 last season.

Torres was finding space, he just didn’t know what to do with it. This led to some of his most egregiously mockable errors over the past few seasons. He would slice open the defense with a well-timed run, find himself in space, and then whiff, much to the delight of many (at least Liverpool fans). You can see how either his touch or his strength let him down at precisely the wrong moment and hilarity ensues.

The seeming constant state of chaos surrounding the Chelsea manager’s job didn’t help. Mourinho is Torres’s fifth Blues boss. Under various managers, he has played aspirational soccer, with lots of possession in the final third (a style that doesn’t suit Torres’s skills). When he played in a functional, defensively structured system, which did suit him, he saw Didier Drogba selected ahead of him.

With Mourinho’s arrival, Chelsea are all of a sudden playing to the Spaniard’s strengths. This iteration of the Blues, like most Mourinho teams, play like a coiled spring. Chelsea sit fairly deep, especially with the lead, with a disciplined defensive structure of two banks of four. It’s not all that dissimilar from a Benitez team. However, unlike Benitez, Mourinho teams counterattack not only with speed but also in numbers. So, while Torres still gets to run the channels against a set defense or break through broken defensive lines on the counterattack, it’s no longer incumbent upon him to shoulder the responsibility of taking on defenders and creating goals all by himself.

The first goal against Manchester City is a wonderful example.

Torres receives an Ivanovic flick of a long ball out of the back. Under certain Chelsea regimes that ball never gets played in the first place. Once Torres picks it up he turns and runs at left back Gael Clichy. Clichy shades him to the inside to prevent Torres from cutting into the box.

2009 Torres might have beaten Clichy, straight up. 2012 Torres might have tried to do that and lost the ball. But Torres under Mourinho has options. He can take the ball wide because Chelsea have Andre Schurrle, a player whose defining skill is crashing into central attacking positions from the wing. Torres takes the simple option shown him by Clichy, beats the left back, gets to a good crossing position, and sets up Schurrle for the goal.

It’s early, but Mourinho’s system of using Torres’s movement to shift defenses, and relying on other players to take advantage of those shifts, certainly seems to be paying dividends. Torres’s turnovers are way down, to only one per 90 minutes, and he’s attempting 3.8 dribbles per game. So he’s attacking more people than he was last season and turning the ball over half as much. Additionally, he’s much more of a creative force than at any previous point in his tenure at Chelsea, creating 1.7 chances per 90 (during the previous three years he only averaged 1.2). Similarly, as he pulls wide, the amount he’s crossing has increased as well, jumping from 2.1 per 90 to 3.5. On top of that he’s shooting more again, averaging 3.1 per 90 minutes, the most he has attempted since leaving Liverpool.

Life under Mourinho clearly suits Torres, and after three difficult years he is slowly beginning to shine again. He’s not “back” — this is a different Torres. The ridiculous physical edge he used to rely on to turn even the unlikeliest situation into a goal-scoring opportunity is gone. But after years of being presented with opportunities to fail because he was no longer the freak athlete everybody remembered him as, Torres is once again being given the chance to succeed. Instead of focusing on what Torres can’t do, Mourinho is deploying him in ways set to maximize what he still does remarkably well. Torres remains excellent at beating defensive lines and dragging center backs out of position. He’s now surrounded with players working in a system to maximize that skill, and as a result both he and Chelsea are thriving. There’s no reason not to expect that to continue. The Torres of Liverpool is never coming back, but that doesn’t mean this version can’t be every bit as lethally efficient — it just won’t make the highlight reels as often.