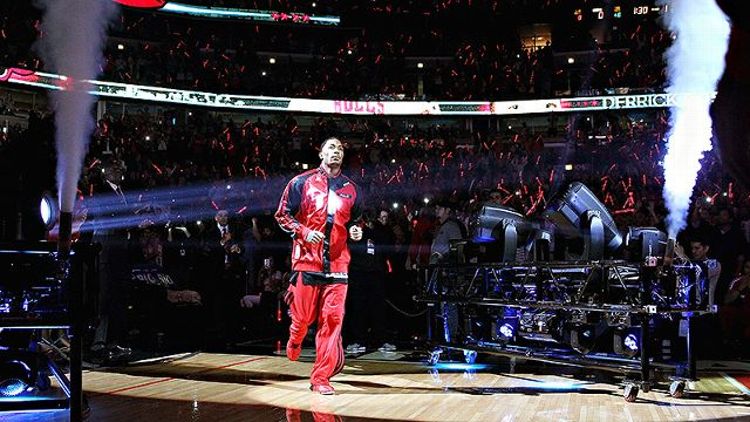 With 17 minutes left in the countdown until tipoff last night, United Center was still half-empty. Rain had beat down on Chicago all day, and adding wet roads to the already grinding rush hour crawl turns I-90 into one long parking lot. As the JumboTron clock hit 16:40, the people who had made it were enough to provide a glimpse of the type of night this was going to be. Shots of the Bulls waiting in the hallway flashed on the video board, moving from player to player. Derrick Rose was last, and when his image came onto the screen, the arena didn’t feel half-empty anymore.

For some, it was probably the first definitive statement they’d received on whether Rose was going to play. A stiff neck kept him out of shootaround that morning, and for a brief stretch, it seemed like the moment Chicago had waited 18 months for would have to wait a few more days.

There’s no sense in rehashing Rose’s saga from that year and a half. When he tore his ACL against Philadelphia in April 2012, the Bulls were the no. 1 seed in the East, with dreams of a title very much alive. Last season, the back and forth about whether Rose should play started in February and went until a depleted Bulls team finally ran out of steam and was put down by Miami. All of that was gone last night. The wait was over.

The Bulls’ famed pregame introductions have started the same way for as long as I can remember. The lights go down, the Alan Parsons Project kicks in, and a video of a herd of bulls running through Chicago plays. Even the graphics quality has barely changed since the '90s. There has never been a reason to change it. There were people who came for this. Those late-'90s intros were their own cultural artifact. Friends of mine who can’t remember a single minute of the '98 Finals can still tell you where Luc Longley went to college (New Mexico). Part of why it has lasted is how it ended, with what became the most famous introduction in sports. From Norrrth Carrrolina ….

When the lights went down, and as the video bulls ran past the Chicago Theatre, the entire arena burned red. Glow sticks populated the entire place, and for as cheesy at it was, it worked in that moment. The lineup was introduced how it has been for years, starting with Luol Deng, “from South Sudan,” moving on to Carlos Boozer. Joakim Noah came third, Jimmy Butler fourth, and after he was called, the PA announcer paused to let the cheers die down.

Michael Jordan is the greatest basketball player who has ever lived, and when I hear recordings of Ray Clay saying “At guard, 6-6,” I still get chills. At a certain point, though, Jordan’s legacy no longer belonged to the city where he played. Michael Jordan was the world’s. That’s why, somehow, the way Rose is introduced hits harder.

Not long into his career, Rose dropped the name of his college for a more appropriate biographical note. There is something about hearing “from Chicago” as a superstar is called to a stage 10 miles from where he grew up, and in the moment before it came, it was clear this is what everyone had waited for. When it finally did, it was hard to make out anything after the first syllable. The place exploded, and the chills crept up my back and around my scalp. Derrick Rose isn’t just a superstar. He’s ours.

What followed was the sort of game that might after so much buildup. The Bulls’ offense was a disjointed mess all night. At the end, the box score said Chicago had 18 turnovers, but it felt like more. Part of that skewed number is the way Rose’s “shots” were attributed. More than a few of them landed out of bounds before he’d even had a chance to send them toward the rim. He finished 7-for-23 with four turnovers, but it easily could have been 7-for-18 with nine.

Early on, whenever he touched the ball, and especially whenever he moved toward the rim, there was a collective inhale around the arena. It wasn’t fear — more anticipation. Everyone wanted something incredible every time, and the problem was it seemed like Rose did too. He looked out of sorts from the beginning, sloppy with the ball and unsure around the rim. It turns out even the Knicks don’t play defense like teams did in the preseason.

Without a dynamic Rose, the Bulls struggled to score as they typically would. The offense was stagnant and good shots were hard to come by. The Bulls scored 56 points in the final three quarters, and even as Butler and Deng combined to make Carmelo Anthony’s night a forgettable one, the Knicks hung in.

With 36 seconds left and the game tied at 80, the Bulls put the ball in Rose’s hands. He dribbled down slowly, crossed-over Raymond Felton three times near the top of the key, and threw up another miserable close-range attempt that landed out of bounds and ended up with the Knicks.

On the other end, Noah’s loose-ball foul allowed Tyson Chandler’s single free throw to push New York’s lead to one. As the Bulls inbounded the ball, Rose ran around two screens and took a pass from Butler on the right wing. After two dribbles, he pulled up just outside the paint, and over four outstretched arms, lofted the ball toward the rim. It dropped through, and a crowd that had clamored for something to cheer about all night finally got its wish — joy and relief all tied up in one collective release.

Everyone stayed on their feet through the timeout, through Anthony’s miss, through Chandler’s errant tip. The Bulls had won, and at least for a moment, Derrick Rose had been Derrick Rose.

The shot was the type he has made from the beginning — the actual beginning. In the 2006 Illinois 2A state championship game, with Simeon and Richwoods tied in the final seconds, Rose lofted a floater toward the rim. It went through, and like that, Rose’s legend in Chicago was solidified.

It’s shots like that one, seven years ago in Peoria, that made last night what it was. It matters that Derrick Rose is from Chicago. It matters that as he sat on a stage last fall to introduce his new shoe, he cried — not because of where he was, but because of where he’d come from, and everything that was happening there. “It’s truly a blessing,” he said, “with all the stuff that’s going on this city, a kid from Englewood got something positive going on. That makes me feel so good.” How the Bulls played basketball last night, even whether they won, mattered very little. A place that matters to Derrick Rose has him back. That was more than enough.