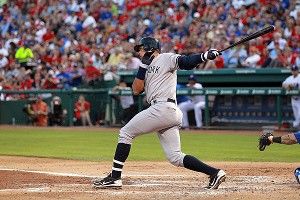 Today, April 26, is the anniversary of what was nearly the most singular confluence of luck and skill in MLB history.

On this date in 2005, the Yankees faced Bartolo Colon and the Angels at what is now the “old” Yankee Stadium. In the first inning, Alex Rodriguez came up with Derek Jeter and Hideki Matsui on base. He blasted a three-run home run to left center. In the third, he came up again with Gary Sheffield on base. This time, his home run was a two-run shot. It only took one inning before he found himself facing Colon again with the bases loaded. The grand slam that followed gave A-Rod three home runs in three at-bats and chased Colon from the game. He hit a single in the sixth, and came up for one last chance in the bottom of the eighth. The bases were empty. Jake Woods threw his 0-1 pitch, and A-Rod lined a ball deep into center field. There’s no video of the moment, because nobody quite knew the history at stake, but we know it went deep, and we know Jeff DaVanon was close to the wall when he made the catch.

And though nobody knew it at the time, that warning track shot was the closest anyone has come in major league history to hitting for the home run cycle — a solo, two-run, three-run, and grand slam home run in the same game.

In most sports, there’s a statistical feat that’s tantalizing and more than just theoretically possible, and yet so contingent on rare skill and rarer luck that the likelihood of it happening approaches zero.

I’m not talking about something like a 27-pitch perfect game, where a pitcher throws just one ball to each batter, and I’m not talking about scoring 300 points in a basketball game. Neither of these are impossible in the strictest sense, but they’ll never happen in the world we currently occupy. Instead, athletic white whales are like Moby Dick itself — difficult, yes, but not beyond the scope of conception. Ahab had his harpoons in the leviathan, and A-Rod watched his eighth-inning drive rise toward the fence. They’re close enough to touch, and then they’re gone.

Let’s take a look at the white whales in the NHL, NBA, MLB, and NFL, along with some honorable mentions.

The Home Run Cycle: A-Rod came the closest, practically speaking, but fellow Yankee Tino Martinez had three chances for a grand slam home run, including two in the ninth inning, in a 1997 game against the Mariners. But he walked, struck out, and grounded out with the bases loaded, and his earlier three home runs were for naught. Just 15 players have hit four home runs in an MLB game, and none were blessed with the right circumstances for a cycle.

In the minor leagues, the home run cycle has been accomplished exactly once, by an Arkansas Travelers’ player named Tyrone Horne, who never got past Triple-A. He did it by the sixth inning, and he had no idea what he’d done (beyond hitting four home runs) until after the game. You can read his story here, and his bat is now in the Hall of Fame.

The Quintuple-Double: This is when a player has 10 each in the following categories: points, rebounds, assists, steals, blocks.

A quadruple-double has been accomplished exactly four times — by Nate Thurmond, Alvin Robertson, Hakeem Olajuwon, and David Robinson. There’s also something called the “five-by-five,” which is when a player has five, rather than 10, in each category. That’s been done 14 times, including six by Olajuwon and three by Andrei Kirilenko.

Not surprisingly, Olajuwon and Kirilenko are the only two players with a five-by-six to their names. And on March 10, 1987, Olajuwon came the closest of any NBA player in history to the quintuple-double when he put up 38 points, 17 rebounds, 12 blocks, seven steals, and six assists against the Supersonics.

The only two known quintuple-doubles occurred at the women’s high school level, by Tamika Catchings in 1997 and Aimee Oertner this past January.

The Mario Lemieux Cycle: Five goals in a game, one of each variety; even-handed, short-handed, power play, penalty shot, and empty net. Unlike the other white whales, this one has actually been accomplished one time. Can you guess the player? It happened on New Year’s Eve in 1988, and the last goal came with two seconds remaining.

Honorable Mention: 10 points in a single game, also done just once, by Darryl Sittler in 1976.

This is probably the toughest sport to find a white whale, since the game is so compartmentalized, but there are three contenders.

300 Yards Rushing: Adrian Peterson came the closest, setting the record at 296 yards against the Chargers in 2007.

I imagine other sports have their equivalents — an ace (a.k.a “condor”) on a par 5 comes to mind — and you’re welcome to chime in below.