Where Does the USMNT Stand Now? 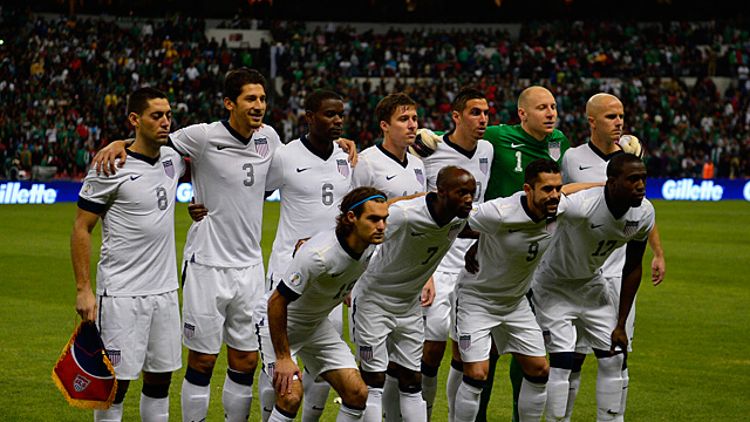 The fly-in, fly-out nature of international soccer creates a scenario in which an entire season’s worth of emotional highs and lows can take place within the span of a week. (In that regard, the whiplash emotional condition of the collective American fan base doesn’t help matters.) Eight days ago, the United States national team found itself desperately in need of a victory, down a no. 1 goalkeeper (Tim Howard) and its top four fullbacks, and reeling from revelations of possible dissension in the ranks. Fast-forward to Wednesday morning, and the Americans sit in fine form, perhaps the highest they’ve been since last August.


Of the results since the U.S. gathered in Denver early last week, the most historic — Tuesday night’s impressive 0-0 draw with Mexico in Azteca Stadium — is the least important. The United States had to have the win against Costa Rica, along with a renewed sense of unity and purpose, and a slight tactical makeover; they did not necessarily need a point at Azteca’s 7,400 feet. Jurgen Klinsmann will take it, especially in what looks to be the most competitive Hexagonal ever, but the outcome isn’t likely to dramatically alter the Stars and Stripes’ World Cup 2014 qualification chances.

Still, what a result it was. The U.S., 0-13-1 all time in World Cup qualifiers in Mexico, were outshot, 17-1, and out-corner-kicked, 15-2, but managed to keep a second-straight clean sheet. Credit goes primarily to three men: Brad Guzan, Matt Besler, and Omar Gonzalez. Guzan, the longtime no. 2 goalkeeper for both club and country, finally got a chance at Aston Villa this season and has been in impressive form. He continued that run of strong performances in net for the U.S. Besler, Sporting Kansas City’s center back, who was pressed into starting duty after Clarence Goodson removed himself before the match because of a hamstring injury, didn’t let Azteca’s altitude nor its atmosphere affect him much. Gonzalez’s efforts, winning everything in the air and making smart tactical decisions about when to step up and when to lay back, were sublime. He answered any and all questions about his ability to play on an international level.

As a unit, the U.S. stayed strong defensively, with Herculez Gomez and Graham Zusi putting in impressive work assisting fullbacks DaMarcus Beasley and Geoff Cameron. Central midfielders Michael Bradley and Maurice Edu helped screen for the defense, too. But Mexico boasts too good of an attack to be stymied completely, and plenty of the blame for their inability to score rests with Javier “Chicharito” Hernandez. On another night, Little Pea — 30 goals in 45 games for El Tri coming into the match — might have had one or two or three, but he managed to score nothing except himself on Tuesday night. The U.S was lucky, perhaps — especially late, when Edu should’ve been called for a foul in the box — but it was also good enough.

The team even had some nice flashes of possession, mostly through the middle of the field, which Mexico strangely conceded. Bradley — who completed 57 of 58 passes, an absurd stat on a number of different levels — linked with Clint Dempsey or Jozy Altidore on a few 20-yard, straight-up-the-gut balls that looked dangerous. The attackers, sapped after battling through Snow Fest 2k13 on Friday night, failed to find the net, but the scoring chances weren’t as one-sided as the stats might imply.

When Guatemalan referee Walter Alexander Lopez Castellanos blew the final whistle, the beer, etc. rained down from the stands. A few things were clear:

• The job of Mexican coach José Manuel “Chepo” de la Torre is in danger, as the country’s federation has a history of canning managers after poor results against the United States. Three points in three games is not enough.

• Klinsmann’s, on the other hand, is as safe as it’s ever been.

• Guzan is as solid a no. 2 as you’ll find. Still, I wonder if the coach’s comment that “he’s more than a no. 2” will cause problems. It’s a nice sentiment, and probably not inaccurate, but it’s also the type of thing that can create controversies down the road. Howard and Guzan are friends, but only one goalkeeper can play at a time.

• After three matches, the U.S. isn’t winning the Hexagonal, but it’s tied for second with two of its three hardest games already over. A place in Brazil 2014 is significantly closer than it was a week ago.

• Perhaps most importantly, the Americans regained their identity as a hard-nosed, scrappy, united squad. The Klinsmann Makeover isn’t on hold, but it’s a slower process than he anticipated and one that can’t possibly be completed over the next year. While the talent level is rising and the player pool deepening, the U.S. still isn’t good enough to succeed by trying to play pretty at all times. (A semi-related note: All 14 players on the field last night spent time in Major League Soccer. I’m not exactly sure what, if anything, that means, but it seems like a good sign for the future of the league and for the national team.)

With the draw, the U.S. ended the latest episode of the American soccer soap opera on a positive cliff-hanger. It picks up again in June with three qualifiers in rapid succession, an 11-day period that will go a long way toward determining the final outcome of the Hex.

Those matches are 10 weeks away. For a moment, everyone involved deserves to take a step back and pat themselves on the back for avoiding disaster and earning four points from two games. After the match against Mexico, a journalist asked Klinsmann if the tie felt like a win. “No,” the affable, playful German responded, “it feels like a tie.” He’s right. But after a long week, it also feels like a relief.