What’s the Matter With These World Cup Full-backs? 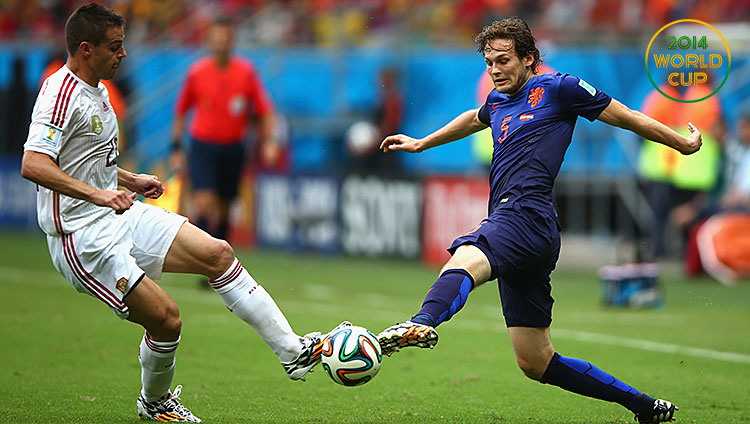 The 2014 World Cup has been something of a nightmare for the world’s best attacking full-backs. With all the goals — we’re on pace for the highest scoring Cup ever — no neutral fans are complaining about wide defensive players getting caught out of position. But the aggregate results from the position have been downright catastrophic.

Marcelo scored the first goal of the 2014 World Cup; he just happened to score it on his own team. England’s Leighton Baines was consistently exploited by lesser-known Italians. Uruguay’s Maxi Pereira was sent off against Costa Rica. Portugal’s Fábio Coentrão has been ruled out for the rest of the tournament. Spain’s Jordi Alba was torched by both Netherlands and Chile. Aging winger DaMarcus Beasley was America’s best option at left back. German maestro Philipp Lahm has been moved into the midfield. What is happening with these guys?

Let’s start with host country Brazil. While on paper it has one of the best duos in the tournament in Marcelo and Dani Alves, the attacking impetus they both provide has left their team’s hopes of advancing less than certain. Essentially, because Brazil has two of the best full-backs in the world, it is worse off at this World Cup.

In Pep Guardiola’s Barcelona setup from 2008 to 2012, Alves established himself as an elite player, providing a wide attacking option along the right flank while receiving cover from Sergio Busquets, who dropped from a holding midfield role into a third center-back position. In attack, Barcelona played in a 3-4-3 formation that could then shift into a 4-3-3 on those rare occasions when the opposition managed to gain possession. In theory, Luiz Gustavo can fill that Busquets role for Brazil.

In practice, things have been sloppier. Marcelo is making similar runs to Alves down the left, and David Luiz is marauding forward from the center-back position, much like he would do for his former club Chelsea. These tactics leave too few defenders watching the store for Brazil.

Croatia exploited these errors, pressuring Marcelo into putting the ball in his own net. Had the suspended Mario Mandzukic played for Croatia in that match, things might have ended very differently than the 3-1 final score. Mexico lacked the pace to exploit Brazil’s poor defensive positioning. Instead El Tri was content to fire long-range shots at Júlio César. The Seleção will face the Netherlands or Chile in the next round. Neither side will be as charitable as the ones they have faced thus far.

For England, left back Baines’s poor performance against Italy came about under a slightly different set of circumstances. With Raheem Sterling excelling in the no. 10/playmaker role for England, Wayne Rooney was shifted out wide into an attacking midfield role, where he provided little cover for Baines.

This worked out well during the buildup to England’s goal, but Baines frequently got too far forward with no cover behind him. This allowed the dangerous Italian duo of Matteo Darmian and Antonio Candreva to run wild down the right flank. Baines looked really bad over the course of the match, displaying little chemistry with Rooney. The two had never played a match in that formation together before. Glen Johnson performed better on England’s right, but he had the benefit of playing with Steven Gerrard and Jordan Henderson, who just happen to be his teammates at Liverpool.

The few impressive performances from the position have come from full-backs playing in wing-back roles in five-man defenses, and those with more tactically limited roles for counterattacking teams.

Relatively unheralded Ajax full-back Daley Blind (I say relatively, because his place in the Dutch Eredivisie league with Ajax is well established, and he likely will transfer to a big-time club in a stronger league this summer) was the man of the match in his team’s thrashing of Spain. Blind provided two perfect assists, and never allowed the pace of Spain’s César Azpilicueta to trouble his team’s side. With Netherlands’ lineup, Blind’s offensive contributions were a necessity.

The Netherlands’ system did not fit nearly as well to its match against Australia. Forced to play more of the match with the ball, the Dutch’s imprecise passing and questionable marking almost doomed the Oranje. In the end, the Netherlands’ attacking talent proved to be enough to see it through, but Blind’s contributions were minimal, and Daryl Janmaat was poor, conceding a penalty in the Dutch win.

The international stage is mirroring play at the club level. Possession-based systems no longer appear to be the best tactic. This should not come as a surprise for anyone who watched Barcelona stumble this past season, bested by pressing and counterattacking Atlético Madrid in the Champions League. In fact, for international teams, the problems that plague possession-oriented squads are exacerbated. International teams lack training time, and with the prevalence of counterattacking sides at the club level, players are able to slot into teams that score on the break.

Spain, the reigning champion, was beat by Chile’s high pressure and the Netherlands’ wing back–driven counterattacks. Rather than an indictment of the players, this is an indictment of teams that have not evolved. Counterattacking is beating possession, offensive full-backs are proving to be a liability, and teams with talent at the position are liable to continue to underachieve as the tournament moves forward.

About Last Night: Down Goes Joel