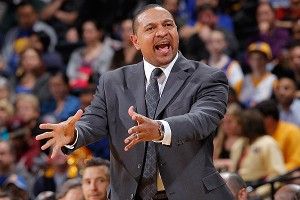 I went over a lot of this in Wednesday’s column about Monta Ellis, but Thursday’s trade-after-the-trade sent me even further into a tizzy. So here’s a breakdown of the last 48 hours for the Warriors, may Mitch Richmond have mercy on their soul.

WHAT THEY GOT: A defensive-minded center who has missed 46, 13, 17, and possibly 70 games in each of the last four seasons. For those who point to efficiency stats as the reason why Monta should have been shipped out of town, Bogut’s 49.5 field goal percentage last year was good for 40th in the league. He only took four 3-pointers, so we can’t really adjust for a versatile big man who can stretch defenses.

It gets worse. Bogut’s true shooting percentage (a stat that takes into account field goals, 3-pointers, and free throws) ranked 281st in the league. That is a lower rate than Andray Blatche, Juwan Howard, Steve Blake, Tracy McGrady, and pretty much everyone else who suited up and dragged their ass on to the court.

I understand Bogut’s strengths lie in his defense and his rebounding, but when you’ve gutted your team and taken on salary, one would hope what you’d get back wasn’t a guy with the offensive skills of Samuel Dalembert. According to Synergy Sports Technology, Bogut shot jumpers on a grand total of 4.6 percent of his possessions last year. To play so close to the basket and shoot under 50 percent is pretty tough to do and means that you’re probably getting the ball too much.

WHAT THEY GAVE UP: It wasn’t a pretty divorce for Captain Jack and the Warriors. I lived in the Bay Area at the time and remember the KNBR commercials: “Hey, Captain Jack. You said you wanted to be traded to a contender. Enjoy your time in Charlotte!” But there’s a reason why Gregg Popovich and the Spurs were willing to give up their first-round pick to bring Captain Jack back to San Antonio. By all accounts, Jackson is a great teammate who busts his ass on both ends of the court and does everything it takes to help his team win. He wasn’t good at all in Milwaukee, but if the Warriors had kept him, they’d have a versatile small forward/shooting guard who could help with their perimeter defense.

WHAT THEY GOT: Nearly $30 million of Richard Jefferson. The same Richard Jefferson who is shooting a torrid 41 percent from the floor this year and seems to have settled into a role as a long-distance shooter. At the age of 31, Jefferson is no longer the spry wing defender he was in New Jersey and nearly all of his explosiveness is gone. What he can do now is jog up and down the court and jack up open 3-pointers. The Warriors already have Dorell Wright and rightfully have invested a lot into the future of Klay Thompson. How does three years of Richard Jefferson help them at all?

They also got a protected first-round pick in this year’s stacked draft. To be fair, the Warriors have been drafting well as of late. But San Antonio’s pick will be somewhere in the late to mid-20s. The success rate of draft picks in that range is remarkably low and certainly not enough of a potential reward to take on Richard Jefferson for two and a half full seasons. Especially for a team that’s butting up against the luxury tax, as is.

Golden State’s front office has made its bold move, but has sacrificed talent, cap flexibility, and youth in the process. If this is the “new look” Warriors, bring back the Nellyball Warriors, please. At least they were fun to watch.