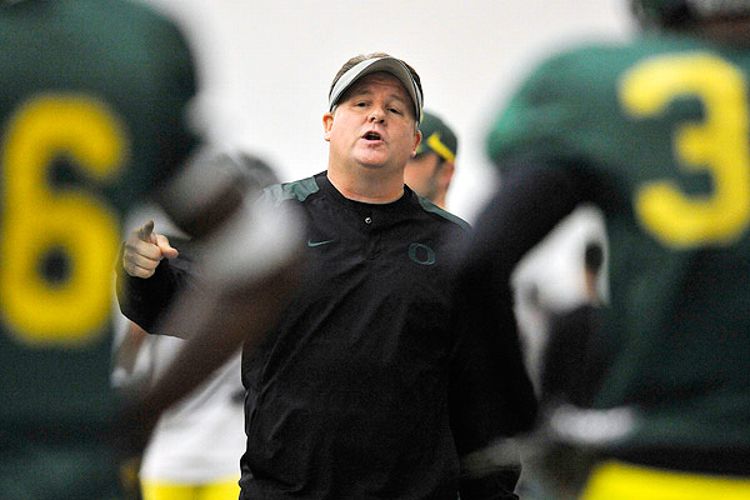 There’s limited value in writing about things that didn’t actually happen (“What if the South had won the Civil War?” “What if Winona Ryder had been cast in The Godfather III instead of Sofia Coppola?” Etc.). But something almost happened on Sunday that’s worth considering, at least briefly: For six hours, it looked like Chip Kelly was going to become coach of the Tampa Bay Buccaneers. By the time I woke up Monday, the rumor was already extinct; Kelly was staying at Oregon. And that bland reality destroyed the mesmerizing unreality of what he might have done to the NFL.

The question everyone had while the Kelly story still seemed real was obvious — would he try to use the same hyper-accelerated, run-based “blur” offense that regularly obliterates the Pac-12? I’m sure every NFL traditionalist would have argued, “No way. That would never work at the pro level.” And perhaps those purists would be correct. But why hire Kelly if that wasn’t what the Bucs wanted? He’s skilled at manipulating complex personal issues (history has proven that his handling of the LeGarrette Blount fiasco in 2009 was virtually perfect), and he knows how to motivate. But there are plenty of conventional choices who understand the modern athlete just as well. You don’t hire a guy for that motive. Kelly’s value is as an offensive innovator; philosophically, he’s able to mainstream what’s happening on the progressive fringes of football culture. My assumption is that he would have made the Bucs play like the Ducks.

Now, would this have worked?

I have no idea. If forced to guess, however, I would argue “probably.” Tampa Bay would have needed to reinvent its offensive line, and there would be a few early games where the Bucs would get hammered like nails. But no one would want to play them. No one would ever want to prepare for them. I’m sure everyone assumes he’d have gotten quarterback Josh Freeman decapitated, but I’ve noticed a (pretty transparent) trend among running QBs at the pro level: The mobile guys who run away from people (Michael Vick, Sam Bradford) inevitably get caught, and then they get hurt … but the mobile guys who run through people (Cam Newton, Tim Tebow) somehow seem to thrive. If you consciously make contact part of your game, contact becomes normal. As a pocket passer, Freeman — at his very, very best — is maybe the ninth or 10th best quarterback in the league (his rating in 2010 was a competitive 95.9). But as a dual threat in a high-volume attack? I don’t think 5,000 yards of total offense is unthinkable. Moreover, every college class (for the next ten years) is going to be saturated with quarterbacks who are genetically engineered to run this kind of scheme, and most of them will go undrafted until at least the third round. Every April, Kelly could have burned all his early picks on defense and still found plenty of skill position speedsters on the second day of the draft. The uniqueness of his specific offensive needs would have worked against what every other team was hunting for.

So, in closing, if Tampa Bay had lured Kelly into their clutches, the Bucs would have won three Super Bowls before 2020.

(You see what I mean? This is what happens when you write about things that didn’t actually happen.)