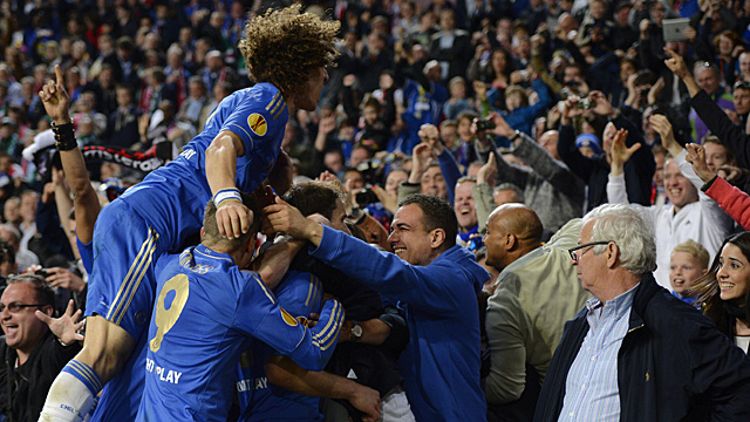 With a looping back-post header well into stoppage time, Branislav Ivanovic turned Benfica goalkeeper Artur into a statued spectator and gave Chelsea FC a 2-1 win in the Europa League final. The easy explanation for Americans not well versed in the various continental soccer competitions is to call it Europe’s NIT. It’s a lesser tournament that nobody really cares about until someone else wins it.

But even that analogy is not really accurate. When Kansas inevitably gets bounced from the NCAA basketball tournament in the Sweet 16, there isn’t a consolation spot waiting for them in the NIT. That’s effectively how Chelsea won a trophy Wednesday.

Chelsea started their European campaign in the way more prestigious (and lucrative) Champions League. The top two teams in each of the eight groups advance to that tournament’s knockout stages. Chelsea finished third. But instead of being eliminated from Europe entirely, all eight third-place Champions League teams get sent to the Europa League — this was also how Chelsea’s opponent, Benfica, ended up in the competition — which, by the way, had already been going on for six months.

In fact, if you want to get technical, Chelsea didn’t even finish in one of the Champions League qualifying spots allocated to England in the first place. They failed to qualify for the Champions League domestically (finishing fifth in the Premier League last season), then they failed to get out of the group stages, so they were sent to another competition that they sort of also didn’t qualify for. And their reward for all that failure? A trophy.

Sure, it’s disingenuous to imply that Chelsea somehow didn’t legitimately gain their spot in the Champions League — they did, as they won the 2011-12 edition (and, as the result of a scheduling quirk, Chelsea will actually hold both European trophies for 10 days) — but I dislike Chelsea intensely so it’s fun to engage in blatant semantic liberties to make them look bad.

They’re not bad, though. Since Roman Abramovich took over the club a decade ago this summer, they have collected 11 trophies. It’s a fairly impressive haul.

Dating back to August, Chelsea have competed in at least six competitions: the Premier League, the FA Cup, the League Cup, the Club World Cup, the Champions League, and the Europa League. That’s just this season.

It’s “at least” because you could make an argument for including the Community Shield on that list. Chelsea lost that preseason/start-of-the-season match, 3-2, to Manchester City, so they are probably OK with leaving it out of the total. Better to say your team that cost somewhere around £300M to assemble went 1-for-6 than 1-for-7. (By comparison, one of this year’s Champions League finalists, Borussia Dortmund, cost less than £35M to put together.)

Being good makes you eligible for more competitions, but even bad teams as far down as England’s fourth division (the numerically deceptive League Two) compete in no less than three competitions every year. Eventually any side should stumble into silverware.

The trophies-for-everyone (well, almost everyone) approach to esteem, combined with safety nets that catch you when you crash out of one competition and gently lower you into another with easier opponents really does show Europe to be a socialist paradise right down to the way it conducts its sporting affairs. This season’s Chelsea squad looks like the poster child — albeit an overprivileged child — for that sort of continental welfare.

Not the U.S. One league. One trophy. That’s competition. Win or die. Or the metaphorical equivalent thereof.

The Houston Astros are on pace to lose about 120 games this season. The consequences for being so terrible? They will receive the first pick in next year’s draft. That’s actually a reward; and it’s the second consecutive season they will receive that reward. It’s not a one-off benefit; all of the major sports leagues in the U.S. reward failure that way.

In Europe, when you are bad you get relegated. We are at the point where we no longer have to explain relegation and promotion to casual American sports fans, right? When you get relegated you lose millions in TV money and sponsorship dollars. Moreover, your best players will often leave because they want to stay at the higher level of competition. It’s a punitive Möbius strip. Wolverhampton just got relegated in successive seasons.

Put it this way: If the Astros were an English soccer team, they would now be their own Double-A affiliate and be worth a fraction of the $615 million Jim Crane paid for them about 18 months ago.

In the U.S., we have salary caps to prevent teams from winning simply by outspending the competition (it also puts a ceiling on player salaries). In the NFL, even when there is no salary cap to keep the playing field level, there is still a salary cap. And where there are no actual spending restrictions (MLB), there is still a luxury tax to discourage and punish massive payrolls.

In Europe you can simply buy someone. Abramovich can ring up Liverpool and say, “I give you feefty meelyon pounds for Fernando Torres.” (What, he doesn’t talk like Teddy KGB?) They don’t have to wait for his contract to run out. They don’t have to put together a package of expiring player contracts. They simply agree on the price, then watch Liverpool squander a huge chunk of that money on Andy Carroll.

That’s a market, and a pretty free one at that. Yet, with regard to sports, it’s something that would seem heretical in the U.S. Maybe it’s to protect rich people from themselves. What would stop Jerry Jones from overpaying for a player again and again?

Instead we have arcane rules that limit the mobility of labor. In MLB there is a draft (Rule 5) of players who have already been drafted. You can’t be a free agent until you’ve had six years of service on the 40-man roster, and even that can be finessed for an extra year by manipulating a player’s call-up date. Until this season, free agents were classified by type to both compensate teams who lost them and limit the number of free agents a given team could sign.

Here, national broadcast rights are collectivized and the monies redistributed. That’s now mostly common in Europe, but still not done in La Liga, where Real Madrid’s €140M TV check was roughly 12 times that of Granada’s. We also take hundreds of millions in tax money to build playing facilities for billionaires, then allow those billionaires to keep most of the revenue generated by the facilities.

American pro sports leagues would be the stuff of Marxists’ wet dreams — MLS is a single entity owning all the player contracts fer chrissakes — except when we redistribute wealth, we do it exactly backward.

We have even turned our institutions of higher education (many of them public) into a farm system so that the player development costs for the likes of the NFL are essentially nothing (although the NCAA building a billion-dollar business on what’s essentially free labor is something that would give the corpse of Milton Friedman a priapism).

Compare that to Chelsea who, under Abramovich, have sunk £100M into their youth academy and all they have to show for it is Ryan Bertrand. That link is from the Sun, so take that number with a pillar of salt, but suffice it to say it costs money to develop players through a club’s youth academy. RG III cost Dan Snyder (net worth of $1 billion) all of $0 to develop. His only risk is figuring out how to not shred the player’s knee so his career lasts longer than two seasons.

While they seem at odds with respective economic principles, which is “better” — there: lots of risk and punishment but lots of trophies; here: little risk, little failure, one trophy — is a subjective argument. Plus there are different dimensions to “better.” The disparity in TV money in Spain mentioned earlier has left many La Liga clubs teetering on insolvency. That’s not sustainable, and that’s not good. But relegation and promotion causes this, which is both awesome and, like the play-by-play guy says, astonishing (or would have been had something almost identical not happened just two weeks prior and one league down).

But in the name of competitive balance we have effectively coddled very rich people in American professional sports and ended up with closed systems. A second chance in a cup competition is just a weird rule that helps a team pick up another trophy. Never not being an MLB team even though you’ve been terrible for a century, that’s a safety net.

There is almost no likelihood things will change, if only because you upset the pricing history. If you say to the next round of owners, “Hey, we’re expanding because we’re having relegation going forward, so we have to account for the cost of a potential decrease in the value of franchises as we price new teams into the league,” then you’ve pissed off the last guy in who paid $1 billion for his NFL team when the new franchises costs only $600 million. You’ve also made his team actually worth less than the $1 billion he paid for it.

The result is a fox vs. hedgehog manifest in sports. And that might say more about the differences between here and there than any political or economic system.