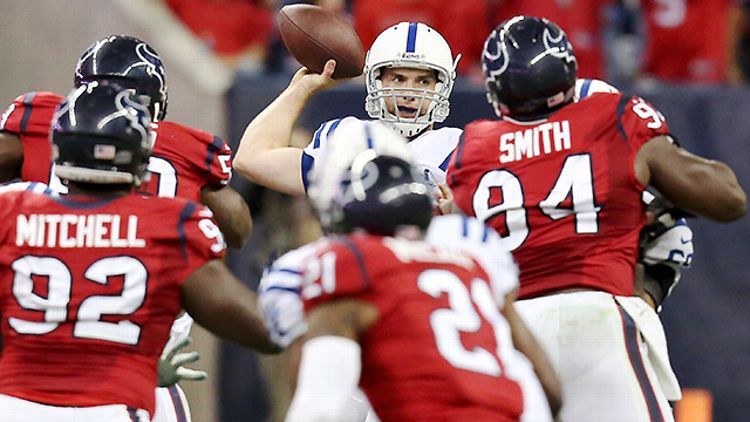 Congratulations! If you’re reading this, you’ve very likely advanced to your fantasy league’s semifinals. I’m sure this is a grueling, stressful time for you, but don’t forget to cherish the moment. While most of your fellow owners are already knee-deep in the offseason, you’re guaranteed at least one more week of roster tinkering, trash-tweeting, and cursing out the grown men running across your TV screen. To enjoy such luxuries beyond this weekend, though, you’ll have to avoid the myriad pitfalls lurking in the shadows of Week 15. That’s no small task, but it’s one that can be made a gazillion times easier by reading the next 1,500 words. Good luck!

1. QB Andrew Luck, Indianapolis Colts: Did Luck end his slump in Week 14, portending a return to form during the season’s final stretch? Or were the 32 fantasy points he posted against the Bengals simply the result of two quarters of garbage time? We could tie ourselves in knots trying to figure this out, but right now, it doesn’t matter: Luck has a delectable matchup with Texans interim head coach/noted slump-buster Wade Phillips looming this week, and Phillips might as well be a drug quarterbacks take to boost their fantasy value.

Houston’s professional football franchises have always been kind to the Luck family, and before this past week, Luck’s last top-notch fantasy performance came in Week 9, IN HOUSTON. What’s more: Luck was pretty mediocre in the game’s first half, and it wasn’t until Phillips took over head coaching duties in the third quarter that Luck began putting numbers on the board. Coincidence? I think not! With a legitimate threat emerging from the pile of human driftwood that had been Indy’s receiving corps, the Texans positioning themselves to land Teddy Bridgewater in the draft, and the peace of mind that comes from clinching a division title, Luck sure seems like a solid bet to finish the week as a top-five quarterback.

NOTE: Reader Sam Clearfield wondered in the comments section of Tuesday’s post whether it was OK to bench Peyton Manning for Luck (in other words, pull an Irsay). While I’m certainly bullish on Luck, the answer is HELL NO. Manning has the Chargers this week, and they might be the only team in the league that’d benefit from Phillips coordinating their defense.

2. RB Montee Ball, Denver Broncos: Obviously, any defense that would benefit from Phillips’s stewardship is one that’s extremely likely to surrender rushing touchdowns at all times, in all dimensions, on all playing surfaces. The Chargers have followed this Newtonian law to a T, allowing 10 scores on the ground in their past six games, and now they face a Broncos backfield that has become something of a two-headed monster, just as offensive coordinator Adam Gase planned.

In Week 14, for the first time all season, Ball’s workload was heavier than Knowshon Moreno’s. They’ve both been pretty productive recently (aside from Moreno’s abject no-show in Kansas City), so it stands to reason that they’ll continue to split carries, thereby reducing the possibility of an overuse injury, maintaining fresh legs, keeping morale high, etc. As such, Ball merits a flex play.

Sorry, Knowshon. Your time as a workhorse is over.

3. TE Jacob Tamme, Denver Broncos: Pardon the Broncos boosterism, but this shit is important. With Wes Welker out, Tamme’s the most likely candidate to serve as Denver’s slot receiver, and Manning loves targeting his slot receiver. The estimable Christopher Harris notes that all six of Tamme’s targets against the Titans came after Welker’s injury, and again, the Chargers’ pass defense is really shoddy.

Admittedly, Tamme’s not a guy most owners would feel comfortable slotting into their starting lineups, especially in the postseason, but he’s available in 98.8 percent of ESPN.com leagues and makes sense if you’re desperate at tight end (i.e., you owned Gronk and weren’t able to grab Dennis Pitta off waivers).

1. RB Chris Johnson, Tennessee Titans: It pains me to sip the Cardinals Kool-Aid with my archnemesis Bruce Arians coaching the team, but I’ll begrudgingly do so here. Kind words about Arizona’s defense are really just kind words about Todd Bowles anyway. So, with that stipulated, expect Chris Johnson to struggle against the team that has allowed the fewest fantasy points to running backs this season.

Among the Cardinals’ recent accomplishments: holding Zac Stacy to 25 yards on 14 carries, surrendering a mere 10 fantasy points to LeSean McCoy, keeping Trent Richardson under 2.5 yards per carry (FINE. NOT…), and not allowing Nick Foles to score a rushing touchdown (the greatest accomplishment of all). Titans execs are reportedly prepared to cut Johnson in the offseason, and Sunday won’t do anything to change their minds.

2. Bills D/ST: One of this season’s most common strategies has been to “stream” the defense facing the enviable task of playing Jacksonville, and it worked beautifully for 10 or so weeks. But the successful owner is the one who keeps up with the changing times, and the Jags are on a freaking roll right now, having won three of four while scoring lots of points in the process.

There are several widely available defenses with better Week 15 matchups than Buffalo, including Tampa Bay, New Orleans, and Atlanta, among others. Do you really want to go down as the owner whose championship hopes were spoiled by Chad Henne?

3. QB Josh McCown, Chicago Bears: Welp. Jay Cutler is back. He’s starting this weekend, relegating McCown to backup duties once again. Maybe McCown helped you reach the playoffs; maybe he helped you win in the opening round last weekend. But it’s time to let go. You’ll always have your memories.

Fantasy Bonanza of the Week: Jets at Panthers

Geno Smith: I was playing like a robot http://t.co/URttygRQZb

Of course, some robots might take offense to such a damning characterization, and I felt it was my journalistic duty to ask around about it.

Still, folks might make the mistake of thinking Geno Smith can play robot-level football after his solid showing against the Raiders, and they’ll be proven wrong on Sunday. Smith has followed up every single one of his decent performances with an abjectly horrendous one, and a matchup with Riverboat Ron is basically a matchup with death.

So while Jets-Panthers is sure to be a bonanza of fantasy points, it’ll be a very one-sided one. Jonathan Stewart’s torn MCL has given Carolina’s backfield some much-needed clarity, firmly entrenching DeAngelo Williams as a passable flex play. Meanwhile, Cam Newton will undoubtedly take advantage of a secondary that is particularly vulnerable to deep balls. And obviously, Smith (he of the league-leading 20 interceptions) against the Carolina defense is a match made in pick-six heaven.

We mentioned this on Tuesday, but it bears repeating: Shane Vereen is the biggest beneficiary of Gronk’s injury, and it’s not even close. A staggering 14 of Vereen’s 17 targets against the Browns came after Gronk’s departure, and the continued absence of deep threat Aaron Dobson is also a value-booster.

What’s more, the Dolphins are one of the worst teams in the league against pass-catching running backs, and the expected sunny conditions in Miami should facilitate a relatively high-scoring game. Vereen will finish Week 15 as the highest-scoring back in PPR leagues, and well within the top five of standard leagues.

Lest you doubt the astronomical number of owners partaking in our weekly Challenge, behold the following tidbit: 0.5 percent of ESPN.com owners have Kirk Cousins in their starting lineups, and that’s clearly because I hinted at a Cousins challenge on Tuesday. Then Mike Shanahan went out and delivered perhaps the best NFL press conference since Al Davis destroyed Lane Kiffin with an overhead projector, giving off the distinct impression that Shanahan also wants a Cousins challenge.

I was left with no choice but to give the people what they want. Win with Cousins as your starting quarterback, and you’ll have successfully completed our sixth Challenge of the Week. Bonus points if you’re using him in a playoff game instead of a consolation round. As always, tweet me your victorious screenshots, and the best ones will end up in next Tuesday’s column. Grantland is not liable if you lose by triple digits: This terrible roster decision is all yours.