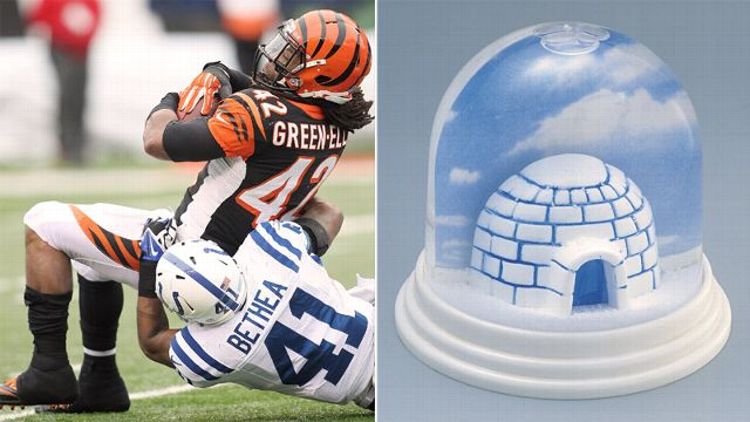 Lions 40, Packers 10
Over Thanksgiving, Lord Kelvin and Niels Bohr ask me what I think Kurt Cobain would be doing if he were alive today. I’m weirdly super-prepared for this question because I’ve spent an afternoon writing 47-Year-Old Kurt fan fiction because of this picture. In my 47-Year-Old Kurt story, 47-Year-Old Kurt is retired from performing, divorced, living in Seattle, a little chubby from the Paxil, halfheartedly producing records. 47-Year-Old Kurt doesn’t hear from Frances much. 47-Year-Old Kurt won a Grammy in 2004 for a King Buzzo spoken-word album he played some feedbacky guitar on. 47-Year-Old Kurt tweets out suicide-hotline numbers around the holidays but doesn’t really “get” Twitter.

The picture of 47-Year-Old Kurt is part of a collection of speculatively aged portraits of dead rock personalities created by a PR agency and a photo-retouching website. 71-Year-Old Jimi Hendrix looks like your uncle who has started to forget people’s names. 78-Year-Old Elvis looks really horrific, like a lesser demon wearing the skin of a country sheriff in a Garth Ennis comic. Dennis Wilson looks like a bent cop. Wilson looks like he’d be fun to party with, like maybe you’d tolerate him putting his hand on your date’s knee just to hang out on his boat and hear him tell Manson stories. Janis Joplin and Karen Carpenter both look happy. There’s no Old Biggie or Old Tupac. Maybe in the 47-Year-Old Kurt Cobain universe it turns out they’re not really dead.

Bengals 17, Chargers 10
Broncos 35, Chiefs 28
The Bengals-Chargers game is blacked out in Southern California so I stay home and watch RedZone with my wife and my daughter. My daughter gives the day’s action her full attention for two minutes before going off to chew on the straps of my wife’s purse. My wife lasts almost seven minutes, then gets irretrievably annoyed with the fractured game narrative of the RedZone experience, although she does learn quickly what it’s like to follow the Bengals. After some Cincinnati receiver drops a pass: “Look at Dalton — he’s all pissed. [Pause.] This doesn’t look like real football. Sorry.” Later, after Knile Davis’s 108-yard kickoff return happens: “Look — this is good football. Your team doesn’t do anything like that. I like the Chiefs — they’re scrappy. They haven’t even cut over to your game in 10 minutes, that’s how boring it is.” Always marry someone who has hotter sports takes than you. The day as a whole ends up being kind of a surprise victory for the Lords Disick, although it turns out to not be enough.

Seahawks 34, Saints 7
The Lords do make it to something called the Consolation Ladder, which sounds like a really plaintive mid-’90s Jade Tree band but is, I’m told by Ryan Kuhlman, a kind of purgatorial non-playoff for teams that did not actually make the playoffs. We never really recovered from losing Arian Foster in November, Ryan Kuhlman says. I want to add that Ryan Kuhlman already has one fantasy Super Bowl win for this season, somehow. He’s looking ahead to the semifinals in three other leagues and the championship in a fourth one. So clearly none of this is his fault. I knew the night of the draft, as I sat in my home office listening to King Krule and assembling this occasionally oiled machine of a team, I knew the odds were against us. And I knew I wanted it that way. The rest of the teams in this league are going to push us off the bottom of the Consolation Ladder pretty soon. But they can never take from us the one thing that really matters, which is our team’s slightly underachiever-ish personal brand. If there’s any lesson I want people to take from this series of blog posts, it’s this: Kids, drop out of school immediately and work full-time on your personal brand. Nothing else is important. You can believe me when I say this because I’m typing it in a home office with a cable television in it.

By the way: I’ve tried really hard not to make this a media column about the commercials they show during football games, but I have some punch-up notes for the people who made that airline commercial in which the husband’s looking over some TPS reports in his hotel room and gets a text from his wife that says “Gavin’s pitching, can you get home early?” Really affecting stuff, but I think it would have resonated more with audiences if the husband had written back, “Nah, because if I really loved the kid I wouldn’t have let you name him Gavin.” Then maybe he could have high-fived his reflection in the mirror.

Bengals 42, Colts 28
James says if you look at a map of known Blood territories in Pasadena, it’s spotted, like a dalmatian. I’ve known James for three minutes when he tells me this. James is the representative from a party of five that wants this Ye Rustic booth when I’m done drinking bar-Cokes in it. James is laying claim. Welcome to Layin’ Claim With James, with your host, James. I won’t be here much longer and I don’t feel awkward about sharing this booth with James but it’s possible James feels awkward about sharing this booth with me, the guy wearing a vintage Bengals snapback and drinking bar-Coke in an otherwise empty five-person booth while writing jokes about Coby Fleener in a small notebook. It’s probably out of a desire to dispel the awkwardness that James, who coaches sports at the Boys & Girls Club, tells me the thing about Blood activity, how Pasadena has way more than you’d expect. I don’t think he actually uses the word “activity,” but it’s a word I like, because it’s evocative of craft projects. Bandanna quilts, word finds, red felt and glue. James says he hasn’t figured out what to buy his girlfriend for Christmas yet, but he has thought of a bunch of things she can use. I decide I’m going to be a gnomic Yoda-like figure in James’s day, so I say, “What if ‘something she can use’ isn’t the right metric?” What then, James?

Flat-screen snow globes all around the bar: Snow in Landover. Snow in Philadelphia. Snow in Baltimore. Meanwhile, it got down to 40 overnight in L.A. and we’re calling it a cold snap. Air blown down from Canada, say the weather guys, excitedly. You can’t go outside without at least two shirts on, it’s crazy. Christmastime in Los Angeles, the most Shane Blackish time of the year. Human interest–wise, the big story of the game is the debut as a Colt of South African rugby star and unrepentant 3 Doors Down fan Daniel Adongo, who got off a plane in Indianapolis in July having never strapped on football pads before. Controversy-wise, the big moment comes near the end of the second half, when BenJarvus Green-Ellis sort of boogie-boards along the ground into the end zone with the ball. Upon review, it’s declared a 1-yard touchdown, even though Dan Dierdorf and Greg Gumbel are convinced (as the NFL will be, by midweek) that Josh Chapman touched Green-Ellis’s foot behind the line of scrimmage. When they go back and show the play again it’s pretty clear that’s exactly what happened, but in this chilly season — it’s 50 degrees outside, the kind of cold that gets into your bones — I’ll take any win that’s handed to me.

Knowshon Moreno and the Strange, Shifting Climate of the NFL Running Back