Knowshon Moreno and the Strange, Shifting Climate of the NFL Running Back 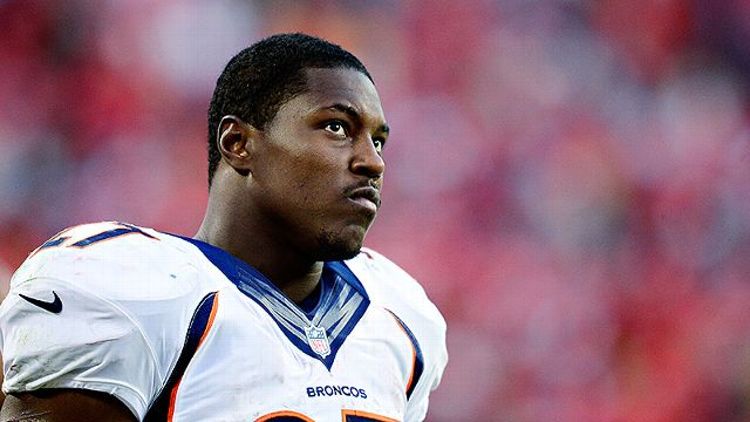 It felt like the end for Knowshon Moreno. Only two years earlier, the Broncos had made the Georgia product the 15th overall pick, but as Moreno was helped off the field in November 2011, that status as a coveted prospected felt much further away. Already bypassed on the depth chart by Willis McGahee and hemorrhaging carries to Lance Ball, Moreno was diagnosed with a torn ACL and his career in Denver seemed like it might be coming to an end.

That’s hard to imagine now. Because when the Broncos — boasting one of the most prolific offenses in league history — take the field tonight in San Diego, it will likely be Moreno flanking Peyton Manning. Two years removed from third-down duties and possibly being cut, Moreno is having the best season of his career. He has averaged 4.3 yards per carry on his way to 920 yards — the eighth-highest total in the league — and he’s made huge contributions in the passing game, where he’s in the top 10 in receiving DVOA among running backs. Only five players — LeSean McCoy, Adrian Peterson, Matt Forte, Jamaal Charles, and Josh Gordon — have more yards from scrimmage.

Skeptics will say that Moreno’s success is nothing more than a product of the Broncos’ offensive dominance, that running backs will always thrive with Peyton Manning because they’ll run only when they should. But Moreno’s place in the Denver offense speaks to more than just how great Manning has been. It’s just another example of the ever-changing way that running backs fit in today’s league. Context is almost everything.

Before the season began, there were questions about who would start for the Broncos in Week 1 — and most of those questions concerned Montee Ball and Ronnie Hillman. Moreno was an afterthought, and although that may have been some misdirection on Denver’s part, no one seemed to be surprised that Moreno was left standing when the music stopped. Ball still may be the back of the future for the Broncos, but Moreno got the job, and has kept it, in large part thanks to how reliable he’s become.

Whether it was Hillman’s early-season fumbles or Ball missing a blitz pickup in the preseason, everyone else was disqualified because despite a higher ceiling, the little things were missing. Being a steady receiver and an even steadier presence in pass protection has become as important for runners in the NFL as ripping off 80-yard touchdowns. It’s something we’ve seen all over the league. I was as guilty as anyone before the season in shouting about the huge year ahead for top-10 pick C.J. Spiller, but once again, he’s been less productive than teammate Fred Jackson — famously a product of the United Indoor Football League. In New York, first-round pick David Wilson has been alternately fumbling or injured all year, and his absence has given way to Andre Brown, a fourth-round pick who’s been on five different teams since 2009.

Even some of the other running backs with a great pedigree are finding success only after flaming out elsewhere. Before Beast Mode, Marshawn Lynch was a bust in Buffalo sent to the Seahawks for a fourth- and a fifth-round pick. Reggie Bush is having the best season of his career, but it took three teams to get there.

The lesson here seems to be that the route to being a productive NFL running back is more undefined than it is with any other position. There are obvious exceptions, but they’ve become rarer now than ever before. Adrian Peterson’s path is now the outlier.

There will always be a few running backs capable of making game-changing plays no matter the context, but even the ones who’ve proven to be stars this year weren’t blue-chip picks. LeSean McCoy went in the second round. Jamaal Charles, who has a worthy claim to the NFL MVP this year, went in the third. That winding road to productivity makes the Colts’ decision to give up a first-round pick for Trent Richardson even more questionable in hindsight. With teams constantly finding viable options in the later rounds (Zac Stacy, Andre Ellington, the undrafted Arian Foster), using a first-round pick on a running back has started to defy explanation, let alone trading that pick for a back who has already struggled in the NFL. Donald Brown, another forgotten first-round bust, has been the Colts’ more productive running back for almost this entire season.

If the ability to find talent further down the draft isn’t incentive enough to pass on first-round backs, the increasing situational element of the position should be, with Denver’s opponent tonight being the perfect example. The Chargers’ running back stable at the beginning of the season consisted of Ryan Mathews, a former first-round pick, and Danny Woodhead, who was about as undrafted as a player can be. Mathews is squarely in the middle of the best stretch of his career, but for most of this season it was Woodhead getting the majority of San Diego’s offensive snaps. Woodhead’s status as the most productive receiving running back in the league this year probably has something to do with that.

What’s most notable about the role unlikely contributors like Woodhead and Moreno have played is that their efforts aren’t coming in mediocre offenses. We know what Denver has done, but the Chargers are second in the league in offensive DVOA. The Saints — a team that relies on an undrafted free agent (Pierre Thomas) and a fourth-round pick (Darren Sproles) at running back instead of a player they picked in the first round just three seasons ago — are fourth. These are some of the league’s best offenses that have turned their running backs into situational stars, and that seems to be a trend that is going to continue.

As the trend deepens, stories like those of Moreno, or Woodhead, or Thomas, or Andre Brown will become even more common. Rather than spend a first-round pick searching for the next Adrian Peterson, running back has become a position where reliability and situational malleability have started to trump game-breaking ability. Anyone looking for proof needs to look no further than the backfields tonight, when the bust and the 5-foot-8 cast-off will be central figures on the two best offenses in the league. It’s been a strange road to this point, but it doesn’t look like there’s any going back.