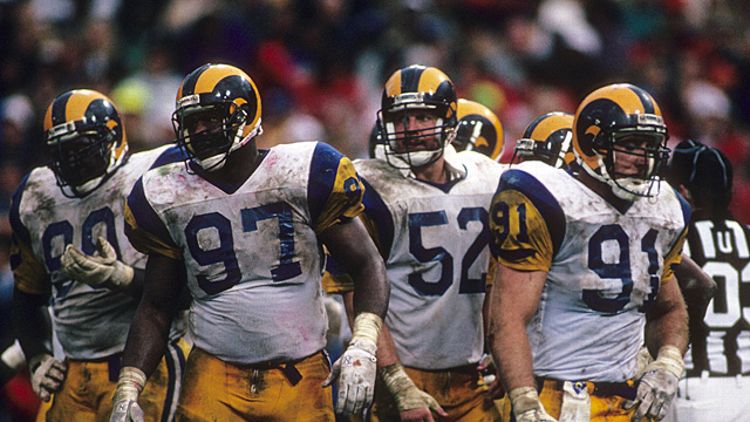 At 8:45 on a Sunday morning in late October, the fans started lining up at Fiesta Hall in Whittier. The doors were scheduled to open in 15 minutes, and the board members of the Southern California Rams Booster Club were still setting up the rows of towels, light-up trinkets, and other Rams-branded merchandise to raffle off as prizes at halftime. At the appointed hour, the fans filed in, finding spots among a sea of round banquet tables broken up by one ornate column in the middle of the darkened room. From these seats, they could watch the three big screens projected against the walls and order from a menu that ranged from a bowl of menudo to the $15 Fearsome Foursome Monster Platter. They were gathered in their best blue and yellow to watch their Rams play the New England Patriots at London’s Wembley Stadium.

By kickoff, about 250 people had shown up. The booster club considered this a smallish crowd, attributable to both the game being on national television and slow recoveries from Saturday-night Halloween parties. Earlier this season, when the Rams went up against the Arizona Cardinals on a Thursday night, there were probably 600 to 700 people packing the place. Getting Hall of Famer Eric Dickerson to come by probably hadn’t hurt.

Los Angeles has been without a football team for almost 20 years. Both the Raiders and the Rams held their last home games in the L.A. area on December 24, 1994. Each of them lost. The Raiders took their motley crew back up to Oakland to ruin an already bad stadium. The Rams went to St. Louis, which the Cardinals had vacated in 1987. There, they’ve won one Super Bowl and are currently coming off a five-year run of seriously gnarly seasons.

Most locals would consider L.A. to still be a Raiders city, but only if they were forced to choose. (Go to the Hollywood Farmer’s Market on a Sunday in the fall, and from the range of jerseys it’s obvious how many transplants keep filtering in out of this town.) The Raiders’ association is partially a proximity issue: You can take a Southwest flight to watch them play a home game eight times a year, and you might even be back home in time to catch The Walking Dead. The visit to St. Louis probably isn’t happening more than once.

The Southern California Rams Booster Club was started nine years ago by Ralph Valdez along with his wife, Dora, and friend Mike Teran. Valdez grew up in Pomona and played on the offensive and defensive line in high school. At booster club events his staff huddles around him, ready for instructions. Now Valdez is a social worker who also coaches the defensive line at Warren High School in Downey. As a kid he used to join his grandfather in trips to the annual Los Angeles Times–sponsored Rams games, whose tickets were just $6. When the franchise left, Valdez protested by burning or tossing much of the memorabilia he’d accumulated. Eventually, though, he got over it.

After years of watching Rams games at home or in the living room of friends, Valdez heard about a local booster club that met at a place called Camachos in City of Industry. The group had only about 15 members and wasn’t too hospitable, so Valdez got the idea to start his own club. When he told his wife about it, she said he should only do it if it would be a family-friendly organization. This approach is still central to the Southern California Rams Booster Club, and it’s reflected in the grandmothers drowning in XXL Rams T-shirts and the preteens with horns bleached into the sides of their gelled-up fauxhawks in attendance. (Club members say the only incidents at games have stemmed from Raiders fans showing up, and that led to the official policy that attendees can wear only Rams colors.)

The first booster club game that Valdez promoted brought 75 fans; by the last game of the season, when the Rams lost to the Falcons in the playoffs, it was more than 450. With the help of the board of directors Valdez has put together, the group now has more than 400 official members, organizes an annual trip to watch the Rams play the Arizona Cardinals, and has set up a charitable organization. It is by far the country’s largest Rams booster club and has partnered with Bring Back the Los Angeles Rams, an organization started by a UC Berkeley student who holds regular rallies for the cause.

Like Valdez, many of the club’s members spent the past two decades not knowing there were still other diehards like them. They’ll show you where they’ve got the team’s logos tattooed onto their skin, or tell you how they’re the only Rams fans left in families full of Raiders and Cowboys defectors. They often speak about their Rams fandom in domestic terms. When describing the first time they watched a game with the booster club, they’ll say it felt like coming home. When they talk about hanging on to the Rams after former owner Georgia Frontiere moved them out of town, it goes darker. “When you get divorced from your wife and you hate her and you can’t stand her, you don’t divorce your kids; they’re your kids,” says Raymond Mendoza, who has #001 on his booster club membership card. “That’s my team, no matter where they go or who owns them — they’re mine.”

The process of bringing football back to Los Angeles has been in the works seemingly since its two franchises left. Only now does it feel like a likely reality. On November 1, the Anschutz Entertainment Group (AEG) reached a multimillion-dollar settlement with a coalition of anti-poverty groups who opposed the development because of housing and environmental concerns, and the company was allowed to move forward with its plans to build Farmers Field in downtown Los Angeles. This agreement removes what many consider to be the final obstruction for the NFL to come back to the country’s second-largest market. Of course, there are still some major matters to work out. For one, AEG — which owns or partially owns (among other things) Staples Center, the Kings, the Lakers, and concert-promotion company Goldenvoice — is now up for sale, probably for several billions of dollars. And second, no team has actually stepped up and said that they’d like to be the ones to play at Farmers.

The Raiders inevitably come up as an option, as do the San Diego Chargers, who were also once a Los Angeles team, in the days of the AFL. The Jacksonville Jaguars became a possibility in late 2011, but new ownership has spoken of keeping the team in Florida.

Last week, rumors emerged that local politicians had been pitching Panthers owner Jerry Richardson on a move to Los Angeles. Carolina is one of only a handful of NFL franchises that owns its stadium and could move without breaking a lease. Richardson has since denied those reports.

As the game against the Pats wound down, most of the Rams fans in attendance stayed to the end, watching their team eventually lose, 45-7. This would be the last game the Southern California Rams Booster Club would organize at Fiesta Hall because of disagreements with the management, and a group familiar with losing a home has been forced again to find a new one of its own. This past Sunday, they hosted their first event at Sage Restaurant & Lounge, still in Whittier.

On that October Sunday after the Patriots game, as folks got up and started to make their way into the bright light of the afternoon, I asked them if they actually thought the Rams would return to Los Angeles. I don’t think it’s my place to either label people as naive or praise them for being true believers, but most of them told me the same thing: It’s just got to happen.

Barack Obama's Advice for the Clippers