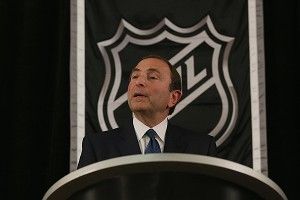 Monday night saw the induction of the four newest members of the Hockey Hall of Fame. The night was a celebration of excellence, and featured a universally positive vibe — or at least it did right up until NHL commissioner Gary Bettman decided to show up.

Yes, even though the NHL is two months into the third crippling lockout of Bettman’s tenure, and against the advice of just about everyone in the hockey world, the commissioner insisted on dropping by the ceremony to say a few words. The result was a painfully awkward two minutes, in which an uncomfortable Bettman plodded through a series of clichéd platitudes while trying his best to ignore the glares from an audience that desperately wanted him to leave.


Could it have been any worse? Yes, actually. It turns out that the speech Bettman originally wrote for the event was edited at the last minute by a league PR staffer. I’ve obtained that version. Here’s what Bettman really wanted to say that night:

Hi, Gary … I had a chance to look over your prepared remarks for tonight’s Hall of Fame ceremony. Awesome work as always, boss. I hope you don’t mind, but I made a few teeny tiny edits. Hope that’s cool! Deletions are in red, additions are in bold.

Thank you, James, and good evening, everyone.

Tonight the all-time roster of the Hockey Hall of Fame is further enriched by four remarkable performers. Four legendary scorers. Four outstanding leaders. Who hail from four different parts of the hockey world.

Pavel Bure, Adam Oates, Joe Sakic, and Mats Sundin elevated our sport and inspired any number of young players to want to do the same thing.

With their creativity, their determination, their character and their skill, these players earned the reverence of their teammates and the respect of their opponents, even the defensemen they tormented and the goaltenders they humbled.

The stat sheets remind us that each of tonight’s honorees averaged at least a point per game. What the stat sheets can’t measure are the millions of fans these players thrilled or the number of memories these men created . Memories made permanent tonight in this timeless hall. We applaud their accomplishments and thank them for making a great game even better.

[] [Pause to see whether Mats Sundin charges the stage and physically assaults you.]

Congratulations are also in order for the media honorees. [You know what, maybe just awkwardly ad lib this whole section instead?]

Being here in this great hall, the sanctuary of our game, celebrates everything that is good and right about hockey, [.][Reminder: You decided not to grow the mustache when you realized this was the month people did that for charity.]

Even in these difficult times, we find ourselves reassured to be here to recognize ultimate achievement on the ice. All of us — fans, teams, and players — look forward to the time the game returns there.

Congratulations again to the inductees, and please enjoy the rest of the evening.

Sean McIndoe’s hockey humor can be found at his blog, Down Goes Brown, and in print twice a week in Canada in the National Post. His first book, The Best of Down Goes Brown, was released in September.