We Went There: The Lakers’ Sobering Moment of Clarity Against the Jazz 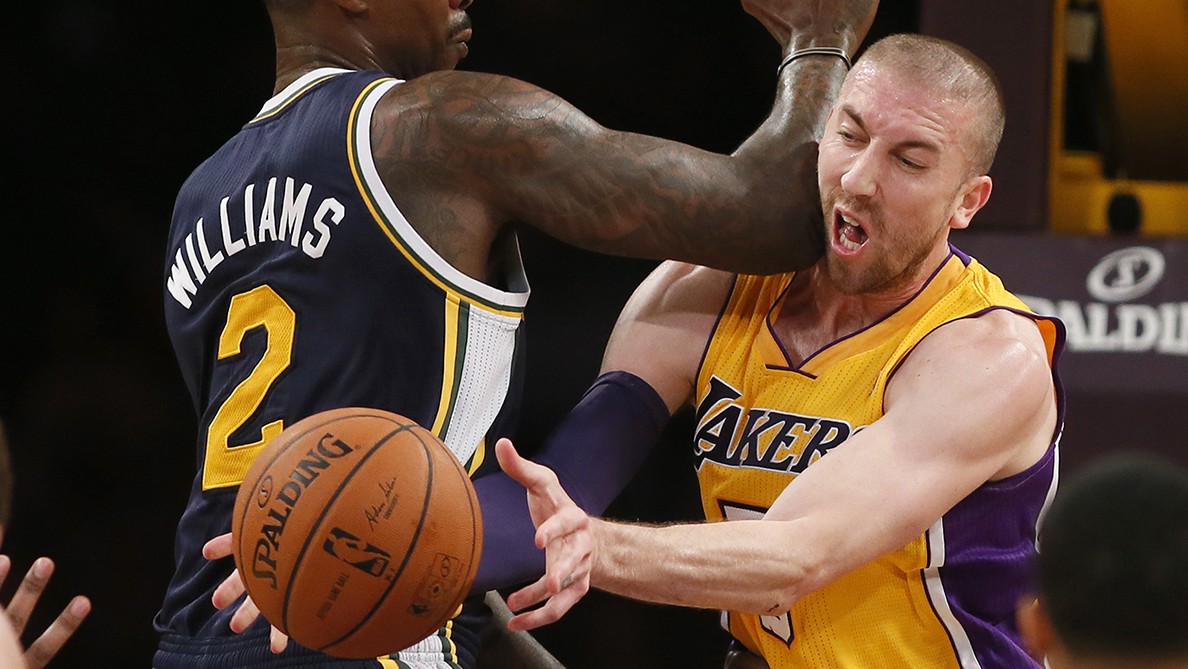 It’s safe to assume Lakers fans realize this team is a far cry from the franchise’s former glory. It might also be safe to say they haven’t fully realized the depth of their team’s despair. After their 17-point loss to the Utah Jazz last night at Staples Center, the Lakers officially have the worse record of the two teams. Who could have foreseen this? At the Jazz’s lowest point, they were 7-22, 29 games into the season; at the same juncture, the Lakers were 13-16. Since then, despite playing .500 ball, the Jazz have maintained the perception that they are one of the league’s absolute dregs. The injury-ravaged Lakers are 5-18 since Christmas. Still, there was a palpable disgust at Staples last night, as fans saw their team fall so far behind the Jazz. Just before halftime, a deflated supporter made himself loud and clear: “This is embarrassing!” Yeah, it was embarrassing. The Lakers had managed to score only 10 points in the second quarter, squandering an 18-0 run the team went on in the first.

I’ve been to local bars where spirits were still high, where they’ve found small victories to keep themselves happy. I’ve seen patrons jump in delight watching Ryan Kelly, unlikeliest of heroes, clinch a win — their first in too long. They holler “Kelly!” with the inflection you might give to “KO-be!” as you arc a balled-up piece of paper into an office trash bin. Then, still in the afterglow of the win, they’ll pivot to how they’re “really looking forward to one of the top-four guys in the draft.” It’s very hard to have it both ways, but that doesn’t quite register. These are the Lakers; these are their fans. Contrary to how you might expect a collapse like this to affect the fan base, the sense of predestination within certain swaths of the community is alive and well. The entitlement, even in the team’s darkest hour, is warm and reassuring.

Last night was a moment of clarity. At the current rate, this will be the worst Lakers team the city of Los Angeles has ever housed. There have been only two Lakers teams worse than the one that stands (barely) today: the 1957-58 and 1959-60 Minneapolis Lakers. Amazingly enough, this year’s Lakers, because there are 10 more games in today’s NBA than there were in 1958, still technically have a shot at history. In the unlikely event the team manages to lose 27 of its last 30 games, it will have a lower win percentage than the 1957-58 team and become the undisputed worst Lakers team ever. (Fun fact: Because there were only eight teams in the league in 1960, the second-worst Lakers ever still managed to make it to the Western finals despite winning only a third of their games.)

The last time the Lakers and Jazz met was on January 3 at Staples Center. Shawne Williams was waived four days after that game. A little over a month later, not only was he back with the team on a 10-day contract, he even started the game because Jordan Farmar, Nick Young, and Jodie Meeks were all inactive. Dejected Fan, still dejected, screamed once again late in the third quarter: “What are you doing, D’Antoni?” In all fairness to Mike D’Antoni, it’s not like he had much to work with. Kelly, a stretch 4 in every sense (he wears no. 4), was nominally the 3 for most of the game, and was guarded by an actual 3 in Brandon Rush, who appeared to be very much in the midst of an existential crisis.

After the game, a solemn Robert Sacre sat, hunched over, in his chair and got dressed. Reporters crowded around him, and every answer he gave took him further and further away from the cheerful weirdo he usually is. I talked to Kelly about his experience with the high-fat Lakers diet, in hopes of providing some levity. I talked about how I went on the diet for a week. (We’re basically brothers in bone broth.) He told me how much it’s helped his fitness, and how delicious it is. I asked how much bacon he goes through a day. “Oh, man, like, 10 to 15 slices,” he said, which is to say he eats roughly an entire one-pound package of bacon every day. I avoided asking about the toll of losing, the toll of injuries, the frustration of joining one of the most illustrious sports franchises in the world, only to end up contributing to a farce.

Had Sacramento overcome Anthony Bennett’s best night of his career and come away with a win, the Lakers would have found themselves in a three-way tie with the Kings and Cavaliers for the fourth-worst record in the league. Instead, they’ll have to settle for the second-worst record in the West. They haven’t yet felt the ground beneath them, which is good. That means there’s still room to fall — and there’s nowhere to go but down. It’s the best thing left. It’s the only thing left — to jockey for position on the draft board with the fellow dregs. Steve Nash played about 16 minutes in the first half and didn’t return for the second. He was replaced by the Nash equilibrium.

The Case for Team Russia