The Case for Team Russia 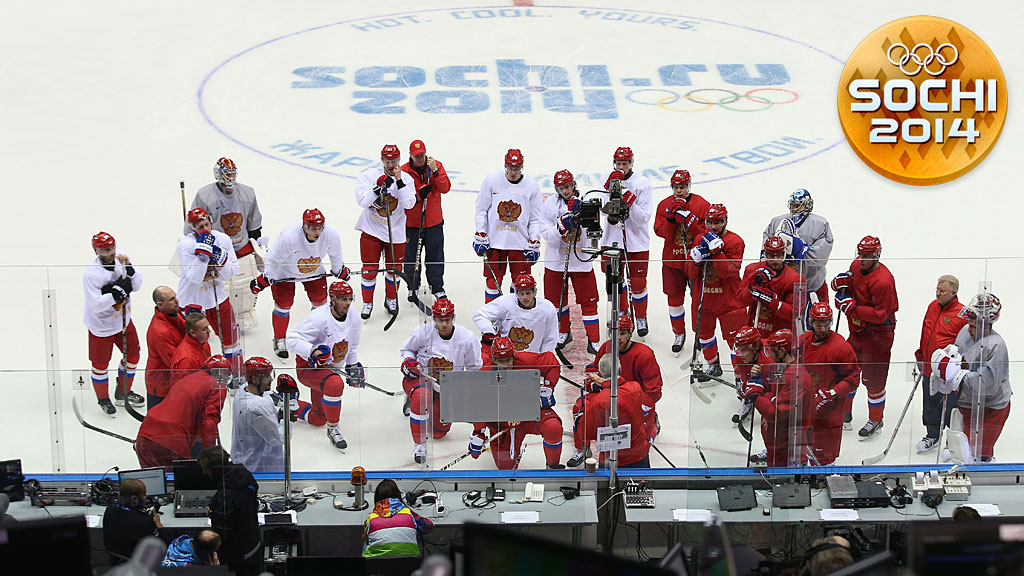 I know if you’re reading this website, you’re most likely either (a) American or (b) Sean McIndoe, but because it’s the Olympics, and we’re all feeling warm and fuzzy about the world (sorta), I’d like to introduce you to my friends, the Russian hockey team. I know. I know. I want T.J. Oshie to win gold as much as you do, but can we just take a minute and celebrate the home team, because in hockey, we’re all pals in the end anyway.

Russia hasn’t medaled since 2002. They got smoked in 2010, which was super embarrassing. And it’s home ice, which, for Russian players, is such a massive deal. (See here for additional details.)

The pressure these guys are under right now is more than a little nutters. So even if you’re pulling for Team USA or Canada in these Games, it’s OK to secretly root for Evgeni Malkin & Co. a little bit, too. Do you know about Geno Malkin? If not, don’t worry! That’s why I’m here! I realize Russian hockey players might seem enigmatic, but they can also be completely wonderful. Here’s a picture of one of them holding a big fish. So let’s take a journey together, and meet your new Russian friends, who will face Slovenia in their first game of the tournament.

Cheer for Russia because you believe in magic.

Pavel Datsyuk, captain of Team Russia, is a two-time Stanley Cup champion, four-time Lady Byng winner, and three-time Selke Trophy winner. If you’re looking for demerits … uhhhh … Datsyuk was boring on 24/7, but that was probably not even his fault because everyone was boring on 24/7 this year.

He is just so, so, so good at this game, and it’s a complete joy to watch him do stuff like this. (And this. And this.) Anyway, if you don’t believe me, ask Siri.

So I really hope he plays. I mean, he’s gonna play, right? RIGHT?

Hard to say! A leg injury left him sidelined for 14 games; he returned for the Red Wings shortly before the NHL’s Olympic break. He practiced earlier this week and says he’s good to go. But who knows if he makes it through the full tournament.

It would be a real bummer if he didn’t, because — on top of all that hockey stuff — he’s also a delight off the ice. Everyone thinks very highly of him, just as a human, which is why his statement on Russia’s LGBT laws was kind of a downer. But, focusing on the positives, he likes to dance on skates, his fellow players think he’s rad, and he Instagrams pictures of his cat.

Cheer for Russia because you believe in superhumans.

BOOM. Do you really need more Alex Ovechkin highlights to be convinced of his bonkers talent? (Apparently some people do!) I’m going to post them regardless, because this bro is fun to watch:

Remember when Ovechkin sorta went double middle fingers to the NHL when they debated whether pros should stay home during the Games? That was awesome. On top of that, his dad seems like a great hang, he’s wearing these ridic skates during the Games, and — for all you tennis fans out there — he’s engaged to Maria Kirilenko. He also apparently likes cats.

Cheer for Russia because you’re down with Russian pop music videos that feature some of the nation’s greatest hockey legends, as well as some of its current stars.

I mean, obviously you are.

Cheer for Russia because you love your parents.

But probably not as much as Geno Malkin. The Malkin family! Can I interest you in this story on Geno Malkin’s parents, who got stuck with his dog after he left for the NHL, just like my parents did when I went to college? Malkin’s mother ran in the Sochi torch relay, which is charming. “Our presence helps Zhenya,” Natalia Malkin said. “He once told me that I am his good luck charm and bring him luck when I am in the stands. Of course we will go to all the games with Dad. What else? Even though we are always anxious during games because our son is playing! Dad can’t even sit still.” Shut up. That’s just so great.

Their kid is also pretty awesome, at both hockey and crushing life. I mean:

Come on. Can’t be mad at him, right? He’s a known goofball. He’s an eligible bachelor. (Or not. Whatever.) And he has a Head & Shoulders commercial.

Personally, though, my favorite Geno moment was when he won the Hart Trophy in 2012 and talked about how difficult to was to come to the U.S. and play so far from home. Because it’s good to remember that hockey players are humans too.

Cheer for Russia because, honestly, these Olympics cost an insane amount of money and they could probably use a win.

Specifically, these Olympics cost $51 billion. BILLON. With a b!

We Went There: The Lakers' Sobering Moment of Clarity Against the Jazz