We Went There: A 72-Hour Whirlwind Tour of European Football 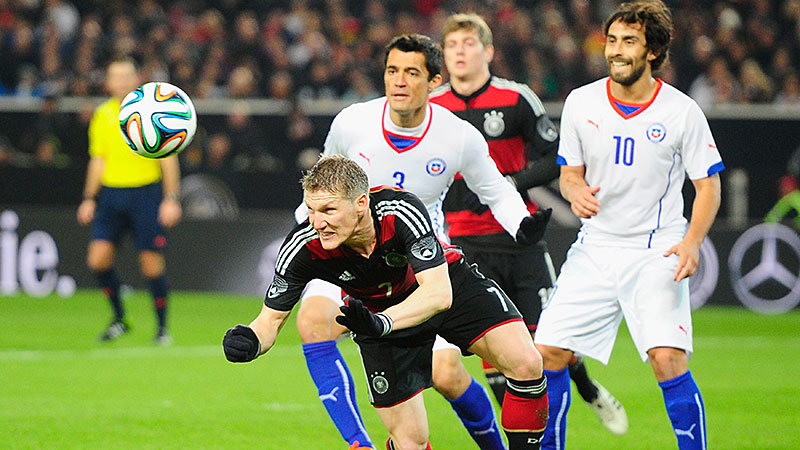 And it was in the shadows of this stadium that I was handed a VIP card — with “Einttritt frei!” on it — for a strip club called Macabu Four Roses.

I don’t know if it was because we didn’t speak German and therefore couldn’t say “no,” but people kept trying to hand us stuff. Our hands were full of beers and bratwurst — we’re tourists, all right? — but that didn’t stop the women from Commerzbank from coming over, multiple times, and handing us schedules for the World Cup. And it didn’t stop the older woman in the German-flag smoking jacket from slipping us a card for the only-€84.95 Germany Jacket, which she casually suggested we buy as an “alternative jersey.”

Not that anything really needed to be sold. “Arturo Vidal versus Germany” is your apocalypse-proof elevator pitch. That … and we’d already purchased our tickets.

Three days earlier, to the hour, I found love in what was a hopeless place for Almeria.

Well, that is, I saw Messi briefly become Roberto Carlos. (Seriously, they were playing side-by-side videos of the two free kicks on local TV the next day.) And I saw Xavi complete 134 passes, create eight (eight!) chances, leisurely snipe a bottom corner from 20 yards out, and just generally make the sport of soccer appear as if it had been designed under the following edict: Combine all things Xavi is the best at.

The whole Barca outlook — Mes Que Un Club and the tautological lens of “The Barca way is the right way, so, win or lose, Barca wins” — can get a bit maddening. Especially when you look at their jersey and then look at the preparations for the 2020 World Cup and then quickly look back, only to see that they’ve again changed their sponsor to a direct-deposit number for Neymar’s dad’s bank account. But if you go to the Camp Nou — as someone who, presumably, enjoys sports, you should — and you see Dani Alves play The Right Side of the Field and the fans get more excited for simple passes that break pressure than for any goal, it’s easy to see where it all comes from and, well, feel some fuzzy emotions.

I don’t know if it was because of the dreaded 9 p.m Sunday kickoff or because it was against Almeria, but inside the stadium, it felt like just another Sunday night. (There were over 60,000 people, but the stadium was nowhere near full. These late kickoffs crush attendance numbers at smaller clubs in Spain, but Barca still does all right.) The hosts jumped out to an early 2-0 lead, and — #WorstLeadInFootball alert — Almeria pulled one back to make things kind of tense for a few minutes. But that always felt more for dramatic effect than as if there were any real sense of danger.

To this jet-lagged American — I left LAX at 7 a.m. Saturday, landed in Barcelona at 7 a.m. Sunday — it seemed like this: You just go and watch Barca play, they pass a lot, you clap when Fabregas turns a defender to break the opposition’s pressing, or Busquets plays a tight one-two, and eventually Barca wins. There was a small pocket of fans with music and flags, and one old man who seemed to be yelling at Busquets to yell at his teammates to pick their shit up, but other than that, there seemed to be a routine to it all. Even if it’s 9 p.m. on a Sunday, you just go sit in the Camp Nou for two hours and you watch Barcelona play the same way they always play. They’ll probably win, but that’s not really why you’re there.

If there’s any other team that inspires similar thoughts of predestination, it’s the German national team. After a few days in Barcelona, visiting my little brother, who’s studying abroad, my other brother, a friend, and I flew to Stuttgart to see Germany play Chile.

On the walk to the stadium, there was a green, corrugated metal wall. On it, spray-painted black lettering read: “This piss wall is also for women.” Earlier, I saw two punk kids with blue and red Mohawks at the Stuttgart central train station. One wore a jacket with shoulder patches of crossed-out swastikas, and the other had a giant graphic on the back of his that said, “Goodnight White Pride.” And at the pregame tailgate — beer, bratwurst, corporate-sponsored juggling contests, and souvenirs — there were multiple Thomas Hitzlsperger jerseys.

Germany, you’re cool with me.

There were Chilean fans with vuvuzelas, which I think is actually a criminal offense in 2014, but for some reason that law wasn’t being enforced, and also Chilean fans without vuvuzelas. They were loud and singing and obviously stood out with the bright red jerseys and their not-German-looking faces. Everyone got along, or the German fans just stared and silently judged the Chileans. Maybe a bit of both. “Jovial” is the atmosphere-describing cliché that comes to mind.

Inside the stadium, a chubby dude with a beard, a Germany jersey, and a faded green military coat came over to try to talk to us. He was drunk and didn’t speak English. He used our friend Brian as a translator, but that didn’t really help. I heard him yell, “Klinsmann!” a few times, and after Brian told him we were rooting for Germany, he said, “I just want whatever team plays best to win.” Then he sang a quick song in cartoon English, which, if I remember correctly, went something like: “Drink my beer! Drink my beer! Forty-five, drink my beer, adios!”

He twirled his finger and walked away.

The stadium itself was beautiful, last renovated a few years ago. A massive white, fabric overhang covered all the seats, bright lights reflecting of the grass — the way these things are supposed to look on posters.  Clean walls, new-ish-looking seats, almost all of which were full (attendance was 54,449) come the 8:45 p.m. kickoff.

I took some notes throughout, and the German guy in front of us kept giving me the side-eye whenever I’d write something down. Another sauced German fan behind us yelled out some words that sounded like someone speaking made-up German. And a German woman yelled at some Chilean fans to sit down — even though — maybe it was the location of our seats behind the goal — most of the game was spent wondering whether we should sit, stand, or crouch, as the ball got close to the goal and viewing angles got stressed in different directions.

Our German pal, if he were being real, would’ve been upset with the result. After a frightening pregame intro where 60 to 70 German children sprinted in full-speed circles around the field to a booming march song, things kicked off, and Germany scored rather quickly, on what ended up being their best chance of the game. Chile pressed high up the field for 90 minutes, Arturo Vidal played this new position called “Literally Everywhere,” and Alexis Sanchez terrorized Germany’s outside backs. A goal never came, but the Chilean fans were loud all night. Chi! Chi! Chi! Le! Le! Le! Throughout the game, there was a German drum that hit 11 beats and was supposed to be followed by a “Deutsch-LAND!” chant. But the Chileans hijacked it every time, replacing the response with “Chi-LE!” It was hard to tell if German fans were anxious, just didn’t care, or were angry — Los Chilenos stole the main frequency. 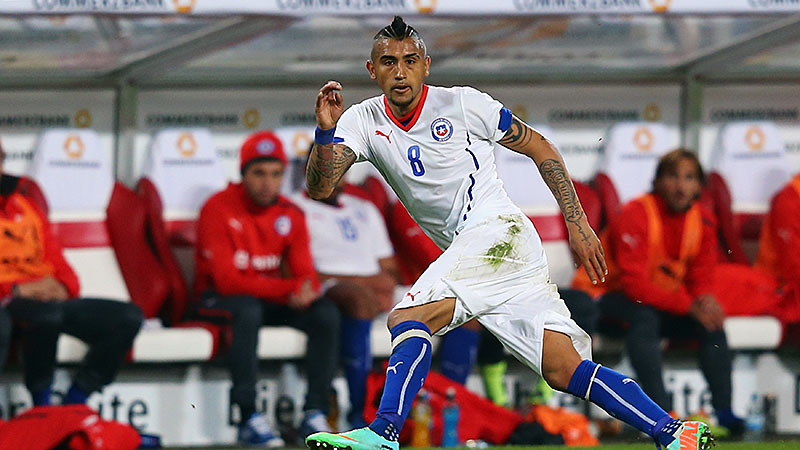 Two hours later, as we stood to leave, the stadium looked about the same, the grass still glistened despite a few divots, and Germany had won — as the saying goes. No one was too pleased — Chile couldn’t score; Germany probably should’ve lost to Chile — even though that Pharrell song immediately came on over the speakers. But it was a fun game for a neutral, and neither team showed any totally crippling weaknesses or suffered any injuries. (Vidal came off late, but that seemed more precautionary than anything. [Prays.]) So, it was a successful friendly. Plus, “Happy” was better than the halftime music.

Even in Germany, Pitbull haunts the speakers.