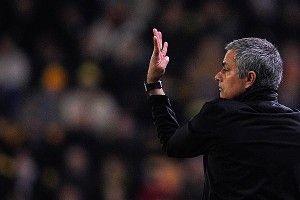 On Wednesday, Real Madrid dropped points to Villarreal, drawing 1-1. Sergio Ramos, Mesut Ozil, and manager Jose Mourinho were all sent off. It was the second straight match in which Real left points on the table (or the field, as it were), beckoning Barcelona back into La Liga’s title race.

A response was needed for this unfortunate turn of events. And a response we do have. On Thursday it was announced that Real would spend $1 billion on the Real Madrid Resort in the United Arab Emirates.

It’s a quaint, comfy, desert-side inn, featuring modest appointments and your run-of-the-mill marina, amusement park, museum, and “futuristic 10,000-seat stadium with one side open to the sea.”

We applaud club president Florentino Perez. In the face of a continuing global economic crisis, and with his club experiencing a bit of a wobble at the top of the Spanish league table, he is making Rick Ross videos look like outtakes from Slacker.

Filed Under: Barcelona, My Resort Is Bigger Than Your Resort, Real Madrid