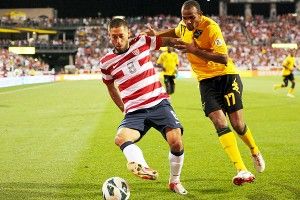 In a virtual must-win match for the United States Men’s National Team, Jurgen Klinsmann’s side did exactly what they needed to do, and nothing else. Herculez Gomez’s 55th-minute free kick provided the only score on a beautiful night in Columbus, Ohio, propelling the Americans over a Jamaican squad that defeated them just four days prior in Kingston and to the top of their World Cup qualifying group.

The Stars and Stripes, featuring five new starters after the surprise 2-1 loss, was a different team in front of the 23,881 red-white-and-blue-clad supporters. Specifically, the insertion of Danny Williams as a defensive midfielder and Sporting Kansas City’s Graham Zusi — who looks like early-career Roger Federer — helped the U.S. to dominate the ball in the opening 45 minutes. The Americans won the possession battle (80 percent to 20 percent), the distribution war (338 passes to 52), and the shot fight (eight to zero). But they had precisely nothing to show for the effort, other than forcing a few highlight-reel saves from Reggae Boyz netminder Dwayne Miller and three strikes that hit various parts of the goal frame and bounced harmlessly away. (Williams’s blast from 25 yards was especially awesome. It nearly exploded the metal pole to Miller’s right before shooting back in the direction from whence it came.)

Klinsmann, perpetually sunny (at least outwardly with the media), promised more during a halftime interview: “We have to push it even more … We have to be hungry, hungry, and determined.” To the USMNT’s credit, they fought off some sluggishness at the beginning of the second half and continued assaulting the Jamaican goal. “It ’tis a siege, this,” ESPN commentator Ian Darke offered in the 51st minute. The payoff they deserved finally came near the hour mark, ironically on a free kick and not during the run of play where they had been so dominant. After Clint Dempsey was hacked down, Gomez — a 30-year-old former also-ran who improbably made the 2010 World Cup team under Bob Bradley and has started the last six matches under the new manager — curled a kick around the wall. Miller could have, should have, would have saved it but he inexplicably didn’t. The Americans had their lead.

With the raucous crowd behind them — the U.S. is 6-0-3 all-time at Columbus Crew Stadium, including a couple vital wins over Mexico — they held on for a trying 30 minutes. In retrospect, it’s probably good one of those golden first-half chances didn’t find a way into the back of the net. Jamaica, forced out of its defensive shell by the need to score, was much improved. The Caribbean side wants to attack not defend, and the Americans weren’t prepared for the half-step their opponents picked up when they began pressing. Perhaps Jamaican coach Theodore Whitmore, one of his country’s only true World Cup heroes, believed his charges couldn’t maintain that level of pressure for 90 minutes after the sustained effort four days ago. He could be correct, but I imagine he woke up on Wednesday morning wondering if the result would have been different if he had his 11 push from the opening whistle (or at least the beginning of the second half). Playing for a tie, even on the road, is overrated, especially when you lose.

But the reality is that the U.S. prevailed and Guatemala, thanks to Carlos Ruiz’s spectacular goal, did as well, meaning three of the four teams in Group A sit on seven points with two games remaining. (Sorry, Antigua and Barbuda.) The Americans, who get A&B on the road and Guatemala at home in October, have the best chance to be one of the two teams that advances into the six-squad “Hexagonal” final round of CONCACAF qualification.

The win will pause the sharpening of knives for Klinsmann, which grew louder after the debacle in Kingston. And it should. The California transplant will continue to be the coach at least through the 2014 World Cup cycle, so let’s stop any conversations that lead to other conclusions, shall we? That doesn’t mean he shouldn’t be held accountable, but the “will he or won’t he get fired?” talk that developed between Friday and Tuesday was ridiculous.

Elsewhere, Zusi’s World Cup qualifying debut proved he can be a solid contributor on the right side of midfield, the kind of creative player Klinsmann loves to deploy. The demise of 33-year-old Steve Cherundolo was greatly exaggerated. After missing the first match with a calf injury, the right back returned and bombed up and down the flank to great effect, although his service wasn’t the best. Williams, more so than anyone, raised his stock with a sublime performance in the middle of the field. (Why it took Klinsmann so long to line him up there is another matter entirely …) Geoff Cameron played as well as anyone over the two-game stretch, partnering effectively with Clarence Goodson and then Carlos Bocanegra. Dempsey continues to do awesome Dempsey things, mixing it up with desire and skill. He’s a bit too much of a loner to be the heart and soul of the U.S. team, but he inspires his teammates nonetheless. (He also produced one outstanding gif.)

The two matches showed that the 30-and-over crowd — Cherundolo, Bocanegra, Dempsey, Gomez, Jermaine Jones (who whines constantly but has good qualities as well) — isn’t done, but the new guard — Cameron, Zusi, Williams, Fabian Johnson, Terrence Boyd, etc. — is ready, willing, and able to contribute. Add Landon Donovan and Michael Bradley back into the mix and you have yourself a nice little squad. It’s up to Klinsmann to mix it all together, but he’s figuring it out.

Should the U.S. be in a better position after four matches against inferior competition? Probably. (Mexico, you’ll note, qualified for the next round on Tuesday night.) But they aren’t. Them’s the breaks. No one is looking back. There’s A+B on October 12 and Guatemala on the 16th. Then there’s the Hex and qualifying for the World Cup. Hopefully. Probably. Definitely maybe.