Sometimes in Baseball, the Mean Isn’t So Mean 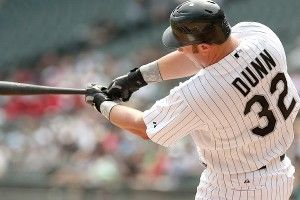 Adam Dunn’s 2011 season was unfathomably bad. Never a high-average hitter, Dunn hit .159, setting the all-time record for lowest batting average in a season for a player with as many plate appearances as he had. After blasting 38 or more homers seven years in a row, he managed just 11 last year. He struck out once every 2.3 at-bats. He played the field just 37 times all year, yet somehow cost his team a bunch of runs on defense in that short time. Of all the seasons played by all the position players in the history of baseball, his was the ninth-worst ever. If the Hindenburg and Tim Welke’s eyesight had a baby, it would look exactly like Adam Dunn’s 2011 season.

Alex Rios was an out machine last year. He accrued 445 of them, which doesn’t seem that terrible at first, not enough to crack 2011’s top-10 outmakers anyway. Except Rios started only 137 games last year, while all of baseball’s leading out-producers played every day or very close to it. And while the top-10 list featured a cavalcade of hitters who generated lots of outs largely by hitting at or near the top of the lineup (Ichiro, Michael Bourn, Ian Kinsler), nearly two-thirds of Rios’s times at bat came from the six, seven, or eight spots in the lineup. All told, Rios hit .227 and produced a terrifying .265 on-base percentage. His Weighted On-Base Average, which also accounts for a hitter’s power production, was the worst for any batting title-qualified hitter in baseball at .266. Drop the playing time requirement from 502 plate appearances down to 496, and Rios’s .266 wOBA would have tied with one other unspeakably bad hitter last year: Adam Dunn.

That the White Sox dropped from 88 wins in 2010 to 79 in 2011 should have surprised no one given how poorly Dunn and Rios performed last year. The two players combined to produce -5.1 Wins Above Replacement in 2011. You would typically expect a replacement-level performance from the last man on your bench, or a Triple-A veteran not quite good enough to stick on a big-league roster. For two players to make their team lose five more games than it would have by simply paying a couple league-minimum wages to a couple of scrubs … that’s downright historic.

But it’s what happened next that’s taught us the bigger lesson. Dunn wasn’t the best power hitter in the league by any means, but he was probably the most consistent, putting up nearly identical numbers throughout the meat of his career. Rios was a good-to-very-good player in four of the five years before his collapse. Neither player was particularly old, with Dunn turning 32 in 2011, Rios 30. Unless both players were hurt, the smart money was on both bouncing back in a big way in 2012. If the only change from the 2011 White Sox to the 2012 version was Dunn and Rios rebounding to somewhere near career norms, you could safely pencil in Chicago as contenders this year. Yet somehow the high likelihood of positive regression toward the mean got missed by at least one dunderheaded writer. And here we are.

No matter how many times you see it, no matter how big the day-to-day, month-to-month, and year-to-year swings might be, regression to the mean will still fool you. If you were a White Sox fan and saw Dunn and Rios play last year, you’d have thought you were watching 80-year-old men trying to hit with spoonulas. In the moment, especially a nightmarish moment that lasts all season, fans, writers, even the most seasoned GMs and talent evaluators can become overwhelmed by what’s happening in front of their face. After a season as disastrous as last year for Dunn and Rios, anyone would be sorely tempted to shepherd both players to the shores of Lake Michigan, leave them with 10 bucks and a couple of life preservers, and run like hell.

The White Sox couldn’t get away that easily. Dunn had three years and $44 million left on his contract, while Rios had three years and $38 million left on his. From a distance, it’s easy to say that the White Sox would be responsible for those contracts whether Dunn and Rios stayed on the roster or got tossed to the curb, so why not create roster space for players who might perform better next year. For the people in charge of actually making these decisions, that’s a much tougher call. If there’s any hope at all for a comeback, you hang on to your albatrosses and pray. It’s entirely possible that Kenny Williams and the rest of the team’s shrewd front office saw past a one-year blip and fully expected Dunn to threaten 40 homers again, and for Rios to threaten new career highs in batting average, home runs, and slugging. But the dollars involved said they didn’t need to. Per Baseball-Reference WAR, Dunn and Rios have already produced about nine more wins than they did last year.

That the heavily favored Tigers sit two back of the White Sox with 21 games to go can also be chalked up largely to regression … just in the other direction. As we wrote in this week’s edition of The 30, Jhonny Peralta and Alex Avila both put up huge numbers for Detroit in 2011. This season, Peralta’s hitting .252/.313/.403 (career lows for a full season are .249, .311, and .385), Avila .243/.350/.383 (OPS down 162 points from last season). Justin Verlander may have swept awards season and Miguel Cabrera might be the best hitter on earth, but the Tigers ran away with the AL Central last season largely because Peralta and Avila played like All-Stars. This season they’ve been worth about five fewer wins for Detroit. When the numbers — especially both players’ inflated batting averages on balls in play — crashed back to earth, the Tigers became merely a good team, rather than a great one.

The twin monster seasons for Peralta and Avila were aberrations that were ripe for regression, albeit not as dramatic as the Dunn and Rios debacles. And like the White Sox, the Tigers were in no position to do anything about it. In fantasy baseball, you shop Peralta and Avila every minute of every day, hoping to sell high on performance that’s almost certainly unsustainable. In real life, good luck finding a shortstop who can hit while signed dirt-cheap, let alone a cost-controlled catcher with patience and pop heading into his age-25 season.

Dunn, Rios, Peralta, and Avila aren’t the only reasons their teams are where they are right now. For the White Sox, A.J. Pierzynski’s hit like Johnny Bench, Jake Peavy’s finally stayed healthy for a full season, Chris Sale’s emerged as an unlikely Cy Young candidate, Kevin Youkilis was a valuable trade addition, and scrap-heap pickup Dewayne Wise is now the best hitter in baseball history, apparently. For the Tigers, Brennan Boesch has been terrible, second base has been a wasteland, and the team’s defense, predictably, has been a mess. In the Tigers’ case, it’s not fair to say that management rested on its laurels and assumed another cakewalk to the playoffs. Not when the Tigers spent $214 million on Prince Fielder in the offseason and traded for Anibal Sanchez and Omar Infante in-season.

Still, it’s regression more than any other factor that’s affected this AL Central race. You carry that lesson forward, too. If you’re the star-less A’s or the 25-deals-with-the-devil Orioles, better start thinking about upgrades this offseason to offset the inevitable wave of regression that’s about to hit. After you print those playoff tickets, anyway.

Back to School: How Mike Shanahan Is Using RG3's College Offense With the Redskins