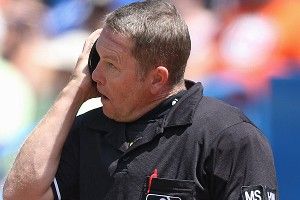 If you were zoned out in a football stupor this past weekend, you missed Jerry Meals unleashing one of the worst calls of the MLB season. On Saturday, the Yankees trailed the Orioles 5-4 in the top of the ninth at Camden Yards, and it was a big, big game. The AL East race had tightened after the Yankee collapse, and an Orioles win would tie things up with 23 games remaining. Yankee first baseman Mark Teixeira came up to bat with runners on first and third and one out. If the run from third scored, the game would continue. If Teixeira hit into a double play — which, to be fair, is a very Teixeira thing to do — it would be over. Here’s what happened:


As you might imagine, Teixeira was pissed. So was Joe Girardi, who said all the right things about the umpires (and didn’t even argue the call), but let his rage bubble to the surface in a postgame shouting match with the New York Post‘s Joel Sherman. As for the umps, crew chief Mike Winters called the video he saw “inconclusive.” Meals himself, you might remember, is the man who blew the 19th-inning call at home last year that ended the Pirates-Braves marathon. As far as I know, he remains the only umpire to be featured on ABC News for incompetence. Bad calls happen, of course (until the robots come), but it is interesting that both calls came at the end of long games and prevented them from going longer into the night. Maybe Jerry Meals really likes hotel rooms.

Anyway, in order to learn more about Meals and try to get a fuller picture before we judge him solely for his exploits on the field, we called him up and asked him the 10 questions James Lipton asks every guest at the end of Inside the Actors Studio.

1. What is your favorite word?
You like this hat? I bought it at a military surplus store in Tucson. Guy told me it belonged to a colonel in the Roman army back in the Stone Age or something, and I don’t see a reason to misbelieve him. Is “misbelieve” a word? It sounds funny to me, but then again I was never much for words. That’s the main reason I chose to be an umpire, because the only words you have to know are out, safe, ball, and strike. Sometimes the players joke around with me, and I just sort of laugh and say “ball.” But I’m not good at knowing when someone is joking, and if the player is mad, the whole laughing thing works against me. It’s a rough game, baseball. Anyway, I was in Tucson because I took the wrong road on the way to Phoenix. Happens all the damn time. I just get so into my music that I miss the road signs, you know? My favorite song is “Mr. Blue Sky” by the Electric Light Orchestra. That’s the only one I play, over and over. I think it says a lot about life, and I like to blast it and sing, sing, sing. Jerry Meals loves to get weird in a car. You can print that. So I missed the turn and ended up in Tucson, but it was a blessing in disguise because I got this hat. Four hundred dollars. Not bad. The red feather part is my favorite. I wonder why the Romans needed that feather? Maybe they could disguise themselves as birds. Pretty clever, when you think about it. But to answer your question, my favorite word is “misbelieve.”

2. What is your least favorite word?
Germany.

3. What turns you on?
Oh man, that’s a good one. [Laughs.] Should I give you the honest answer, or the smart one? Smart answer, a nice romantic dinner with my wife. Honest answer, a beautiful blonde female police officer pulls me over on a deserted highway. She looks stern as she approaches, and she taps on the window with a baton. I roll it down, but I forget to turn off the CD player. “Mr. Blue Sky” is blaring. She gives me a real glare, and then says, “Is that ‘Mr. Blue Sky’?” I nod, she rolls up her sleeve, and what do I see? An ELECTRIC LIGHT ORCHESTRA TATTOO. Unbelievable! Fast-forward 20 minutes, we’re in the backseat, and — just out of curiosity, how much of this are you going to print?

4. What turns you off?
Again, Germany.

5. What sound or noise do you love?
The sound of coffee beans grinding. I like it so much my friends call me “Mr. Bean.” I own 45 different grinders, because each one sounds different. Sometimes I just run them all at once and go into a trance. The crazy thing is, I don’t even like coffee. It tastes like chocolate, if someone ruined chocolate by mixing it with furniture lacquer. People tell me that chocolate and coffee come from the same bean, but I misbelieve that. And I know what you’re thinking — how do I know what furniture lacquer tastes like? Well, let’s just say I was something of a party animal as a teenager. I’d eat anything. Still will, especially now that my eyes are bad. A lot of things look like steak when the whole world is blurry. I ate my wife’s curling iron last Wednesday.

6. What sound or noise do you hate?
The German language.

7. What is your favorite curse word?
I don’t swear. I used to, but then friends told me that when you curse, the devil makes your penis grow smaller. No thank you!

8. What profession other than your own would you like to attempt?
I always thought I’d be a good dancer. If you notice, I do a lot of fancy moves when I ring up a batter. Lots of spins, dips, and twists. I used to sort of run up the baseline before I gave the strike-three call to make it more dramatic, but Selig called me in and told me to cut it out. He never gave an exact reason, but I think the other umps were jealous of my rhythm. I was almost too good, you know? Another thing I like to do, after a 3-2 pitch, is just wait and wait and wait until the batter starts walking down to first base. Then all the sudden I’m like HEEEE-YIKE-A-THREEEEEE! And then I do one of my jump moves. A little hop-and-punch. Man, the people go nuts for that! I did that once to Dustin Pedroia, and he got right up in my face. I just laughed and said “ball,” but I think that was one of those times when he was mad.

9. What profession would you not like to do?
To be honest, I don’t really enjoy being an umpire. The games are so long. Human beings weren’t made to work three hours a day. But I have a telephone phobia, so I wouldn’t want to do anything that involves phones.

10. If heaven exists, what would you like to hear God say when you arrive at the pearly gates?
“I am not God, for YOU are God.” I’d get a kick out of that.