Trio Grande Valley: Daryl Morey’s D-League Plan to Do Away With Midrange Shots 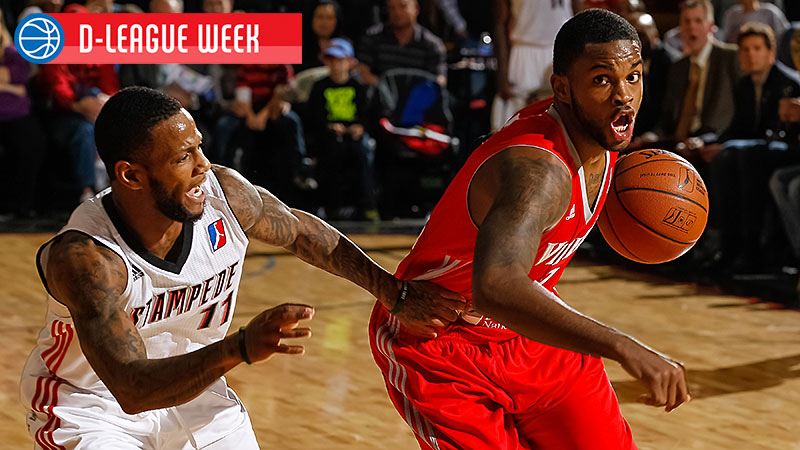 Although a regulation-size basketball court contains 4,700 square feet, NBA offenses really operate within only a relatively small amount of this space. In fact, more than 98 percent of shots occur within a 1,300-square-foot zone that spans between the baseline and a relatively thin buffer around the 3-point line. That’s about the size of a large three-bedroom apartment. Before the 3-point line, the relationship between shot length and scoring efficiency was simple: Longer shots introduced more risk and offered less reward.

In 1979, the NBA introduced the 3-point line, and it had an immediate, albeit moderate, effect. In the second year of the 3-point era, the Cavaliers’ Mike Bratz, an Academic All-American from Stanford, led the league in 3-pointers by knocking down 57 in 80 games; he shot 34 percent from beyond the arc. In those days, Bratz (now the assistant GM in Sacramento) was a maniac; almost 21 percent of his shots occurred beyond the arc.

A generation later, Bratz’s numbers wouldn’t come close to leading the league. So far this season, 25 percent of NBA field goal attempts have occurred beyond the 3-point line. As a whole, the league is making 37 percent of its 3s. And despite the dramatic rise in 3-point shooting, many of the game’s premier analytical minds suggest that even today’s rate of 3-point shooting remains too conservative. There is no more prominent member of this camp than Daryl Morey, the general manager of the Houston Rockets and one of the cochairs of the annual MIT Sloan Sports Analytics Conference, which gets under way tomorrow in Boston.

There are essentially three kinds of shots in the NBA: close-range shots, midrange shots, and 3-point shots. Altogether, the league takes 41 percent of its shots inside of eight feet and makes 55 percent of them. That means the lion’s share of NBA shot attempts comes from either midrange or 3-point attempts. So far this year, 2-point shots between the eight-foot mark and the 3-point line have succeeded 39 percent of the time. Three-point shots connect 37 percent of the time; you don’t have to be an Academic All-American to figure out that, generally speaking, 3-point shots are better offensive investments than 2-point jumpers. 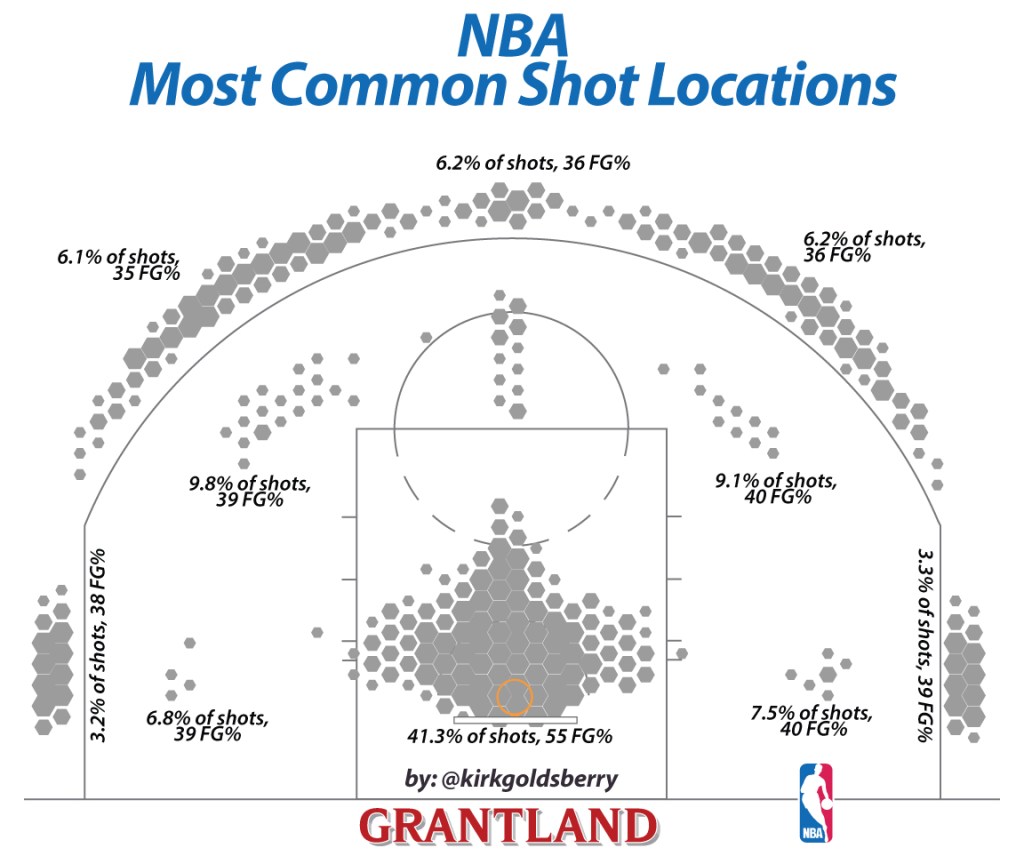 Still, as a whole, the league continues to take a third of its shots in the midrange area. Players remain especially fond of the areas just beyond the elbows and those little 15-foot baseline zones. Based on the numbers, however, these affinities appear foolish, and it seems like the smartest offensive strategy would be to forsake these spots and shoot only 3s and shots near the basket.

This is exactly what Morey’s D-League team does. The Rio Grande Valley Vipers (profiled by Jason Schwartz on Grantland this week) are the most fascinating ongoing experiment in basketball right now because they have constructed an offensive strategy around shooting only 3s and close-range shots. They shun the midrange as if it were illegal to shoot from there.

So far this season, the Vipers have attempted more than 3,200 shots. A staggering 92 percent of these shots come from either beyond the arc or within eight feet.

Their favorite shots are inspired by the analytical notion that midrange shots are the worst investments on the floor and therefore they should be avoided in favor of the smarter options close to the rim and beyond the arc. 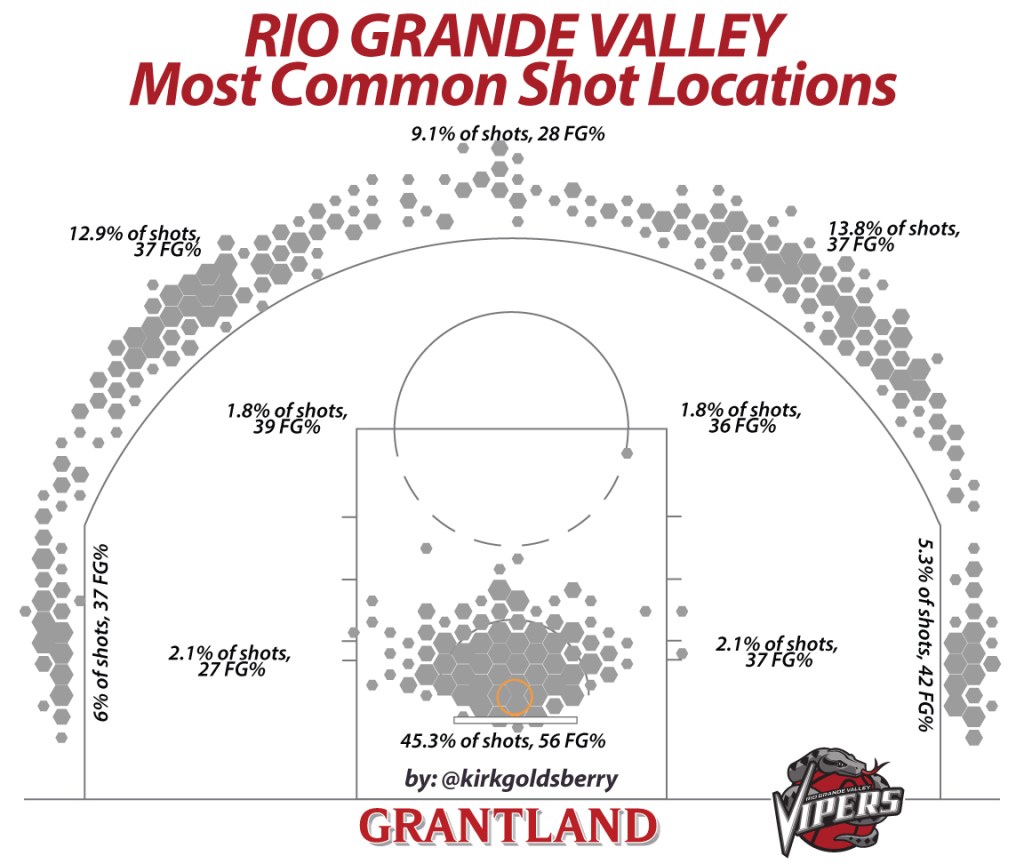 When you compare the overall shot signature of the Vipers with that of the NBA, the differences are clear. The Vipers have essentially replaced all of their “lost” midrange activity with more attempts from beyond the arc; a staggering 47 percent of their shots are 3-pointers. They are also slightly more active near the basket, but the real difference is in the jumpers.

So far, the strategy has worked. The Vipers lead the D-League in offensive efficiency and have the best record. Without a doubt, these are impressive results, but they raise a couple questions:

1. Is this smart basketball?

As it turns out, the answer to both questions is, “Meh … ”

This season, the Philadelphia 76ers take 22 3s per game. But the Sixers also have the league’s least efficient offense, scoring only 96 points per 100 possessions. Meanwhile, the Portland Trail Blazers lead the league in midrange jumpers per game, and they have the second most efficient scoring offense in the league. The Blazers’ leading scorer, LaMarcus Aldridge, has taken more midrange shots by himself than Morey’s Rockets have as a team.

Aldridge helps explain the value of the midrange game. When a team has a threatening midrange presence, it is harder to guard and it spaces the floor better. As Aldridge told me last month, his ability to knock down 2-point jumpers “puts pressure on the guards and the bigs to guard me in the midrange, which makes the defender in the corner come to me on pick-and-pops, which gives Wes [Matthews] or Nico [Batum] that open shot in the corner. Or, the big doesn’t want me to get that open shot, so he doesn’t help when [Damian Lillard] attacks the basket. So, by me being so good in the midrange area, it gets us corner 3s or it gets our guards open drives to the basket.”

One troubling issue with the Vipers’ strategy is that they are significantly reducing the size of the scoring area. Let’s go back to the 1,300-square-foot apartment metaphor — the Vipers hang out only in the kitchen and bedroom. They never use the living room. By forgoing midrange shots altogether, they are telling opponents that they don’t plan on using a giant swath of tactical space relatively close to the basket. As NBA defenses evolve, the smartest ones are already finding ways to counter the smart-guy shot-selection strategy. The Pacers, who have the league’s best defense, have a reputation for vigorously defending the restricted area and the 3-point area, while being less protective of the midrange. They are the Vipers’ antivenom. And if defenses are able to take away those “efficient” areas, you better have alternative ways to generate offense.

Another thing to consider is that all NBA players aren’t “average” and the league’s best scorers convert midrange shots at rates much higher than 39 percent. For example, this guy, who beat the Knicks with a midrange shot this week: 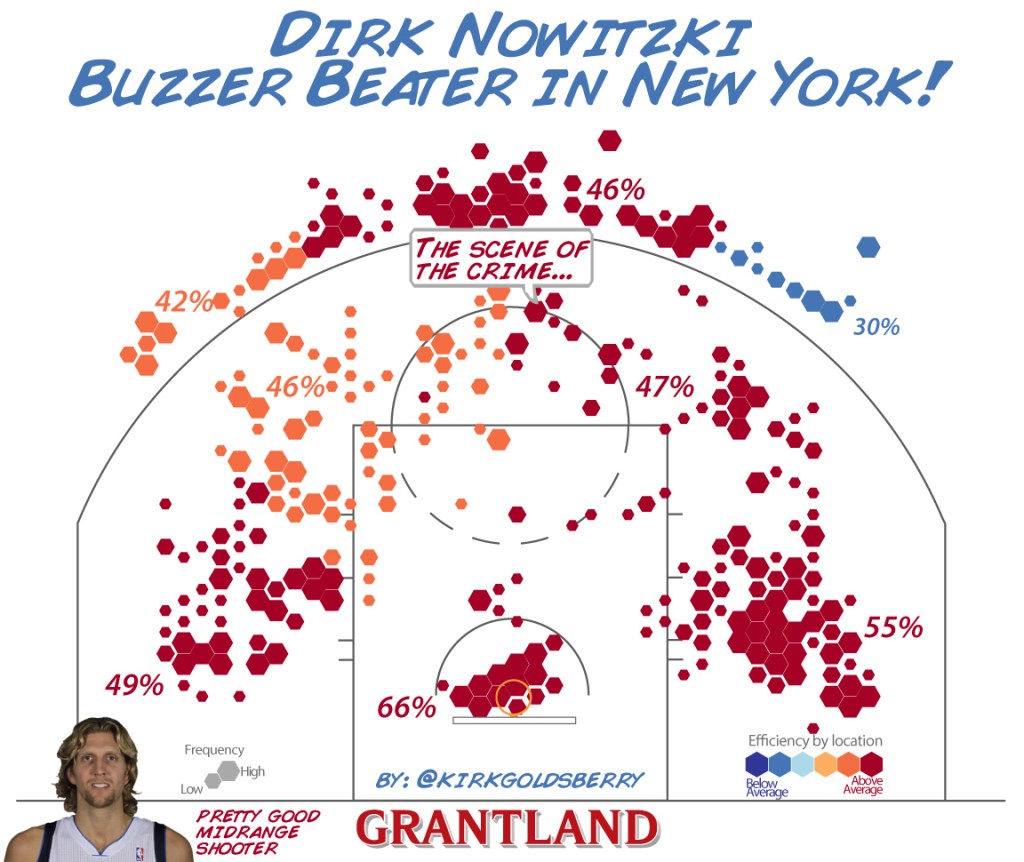 If you have a player like Dirk Nowitzki, you would be crazy to deter him from taking midrange shots. The same goes for LeBron James, Tony Parker, Kobe Bryant, Dwyane Wade, Paul Pierce, and a handful of other guys who have recently won NBA Finals MVP awards. Still, this list of players doesn’t dismiss RGV and Houston’s core idea of teams improving overall offensive efficiency by devising means to improve shot selection.

There is no “optimal” shot selection solution that will apply to every team or player, but Morey’s ascendant Vipers and Rockets are proof that he is on to something that works for his organization. Given where the teams were a few years ago, there’s no denying that his architecture is working. It might not fit everywhere, but that’s never been the goal; maybe Daryl Morey cares more about winning games than solving basketball.