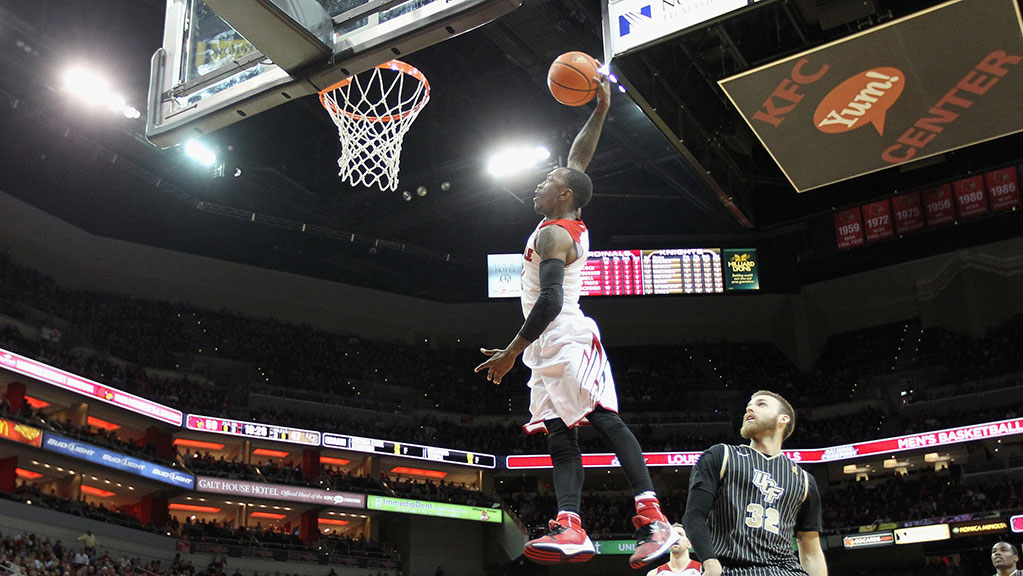 We’re just over two weeks away from Selection Sunday, which means we are slowly (or quickly, rather) inching our way toward the finest month of the year. We understand not everybody has time to follow every single Tyler Ennis game-winning 3 or every Joel Embiid monster block, let alone the moves of lesser-known players. So to help you impress your buddies come NCAA tournament time, we’ve compiled a list of five guys you should watch in college hoops tonight. Look forward to this special edition of the Triangle Cheat Sheet appearing strategically and just when you need it most. Here’s the full listing of tonight’s games, but we’ve chosen to focus on Louisville-Temple, Duquesne–Saint Louis, Arkansas-Kentucky, and Iowa-Indiana. Now, off on your merry way!

The facts: As a junior, Russ Smith helped lead Louisville to the 2013 NCAA championship, earning Most Outstanding Player of the Midwest Region along the way. He averaged 22.3 points in the Cardinals’ six tournament games, scoring a career-high 31 against Oregon and 23 against Duke in the Elite Eight, and was selected as national player of the year by Ken Pomeroy. Smith has returned in full force this year, improving in almost every statistical category and leading Louisville in points and assists per game. He’s coming off of three poor outings, going 2-4, 9-19, and 3-10 against Rutgers, South Florida, and Cincinnati, respectively, but has maintained double-digit point totals in every game except the one against the Scarlet Knights.

The facts: It’s hard to become a household name when you play in a lesser-known conference like the Atlantic 10, but it’s a little easier when your name is Jordair Jett. Jett was a member of the 2013 Billikens team that beat New Mexico State in the first round before falling to Oregon in the second. Jett put up fairly solid but not outstanding numbers last year, averaging nine points across 35 games and leading Saint Louis with 12 assists. This year, his role has grown bigger, and he boasts the most minutes on the team and averages 13.8 points per game, along with five assists and 1.5 steals. With his help, the Billikens are undefeated in conference play and have dropped only two games, to Wisconsin and Wichita State — both ranked and strong tournament contenders. He lifted the Billikens to a 65-63 win over La Salle with a game-winning layup earlier this month.

Fun tidbit: Check out this sick block from Jett:

The facts: Cauley-Stein came in as a highly touted recruit for the Wildcats, capping a strong freshman season with multiple SEC Freshman of the Week accolades and a nomination to the Freshman All-SEC team. He was a part of a subpar Kentucky team that went 21-12 last year and failed to make the NCAA tournament after the team won the final the year before. He was a regular contributor off the bench last year behind Nerlens Noel, averaging 8.3 points, but has since moved to the starting rotation. He’s averaging fewer points (inevitable when you’re a member of a team that boasts Julius Randle, James Young, and the Harrison twins), but leads the team in blocks per game, with three. He missed some time earlier this season with a hand injury and a hamstring injury, but has since resumed play as normal. Cauley-Stein is projected to be a lottery pick in the 2014 draft.

Fun tidbit: Cauley-Stein played as a wide receiver in high school, amassing 57 passes for 1,140 yards and 14 touchdowns through nine games his senior year. By the way, he’s seven feet tall. Need proof? Here’s him as a dual-sport threat in high school:

Also, he thinks he’d survive the zombie apocalypse. Who are we to disagree?

The facts: Marble has been relatively unknown up to this point, in part because of Iowa’s lackluster performance in the last few years. But this season he has definitely made a name for himself. Entering this season, he became the first Hawkeye to total 1,100 points, 350 rebounds, and 275 assists as a junior, and has put up double-figure point totals 56 times. He helped lead Iowa to multiple NIT performances, and this could be the year the Hawkeyes make the jump to the big time. Under his leadership this year, Iowa reached a no. 20 rank and came up with huge wins over then–no. 3 Ohio State and then–no. 10 Michigan State. Though the Hawkeyes have suffered eight losses, including a recent two-game slump, five of those have come against ranked teams in a strong Big Ten conference. Over the past seven games, Marble’s had six 15-plus-point showings, shooting 43 percent over that stretch. Despite putting up numbers that aren’t particularly jaw-dropping (16.5 points, 3.6 rebounds, 2.9 assists), he’s the most important player on this year’s Hawkeye team, and if Iowa makes the tournament, a lot of that will be because of him.

Fun tidbit: His Twitter bio is awesome, if only for this one line: “The $$$ is the motive.” His Instagram bio is also outstanding: “Fly, Flashy, Flamboyant.” He also has a sick shoe collection:

The facts: Kevin “Yogi” Ferrell should be a name most casual college basketball fans are familiar with. Ferrell was named by conference coaches to the Big Ten All-Freshman team last year, as well as garnering an honorable mention to the All-Big Ten from media. He came in as a highly prized recruit, checking in to the no. 2 point guard spot per Rivals.com and the 24th overall prospect in the ESPN100. He helped the no. 1–seeded Hoosiers to a Sweet 16 appearance last year, before the team was upset 61-50 by fourth-seeded Syracuse. He’s become a much more dominant and important player this year with the departure of Cody Zeller, Victor Oladipo, Christian Watford, and Jordan Hulls, increasing his points-per-game average by 10 and his minutes by five. He’s improved his shooting as well, and is taking more than double the amount of shots he did last year. While Indiana is still working with a team of new faces this year and is a terrible 5-9 in conference play and 15-12 overall, Ferrell remains dominant.

Fun tidbit: Ferrell as a sixth grader was the best. The fact that this video exists makes me happy beyond all belief. God bless the Internet, God bless America, and God bless Yogi Ferrell.

Trio Grande Valley: Daryl Morey's D-League Plan to Do Away With Midrange Shots