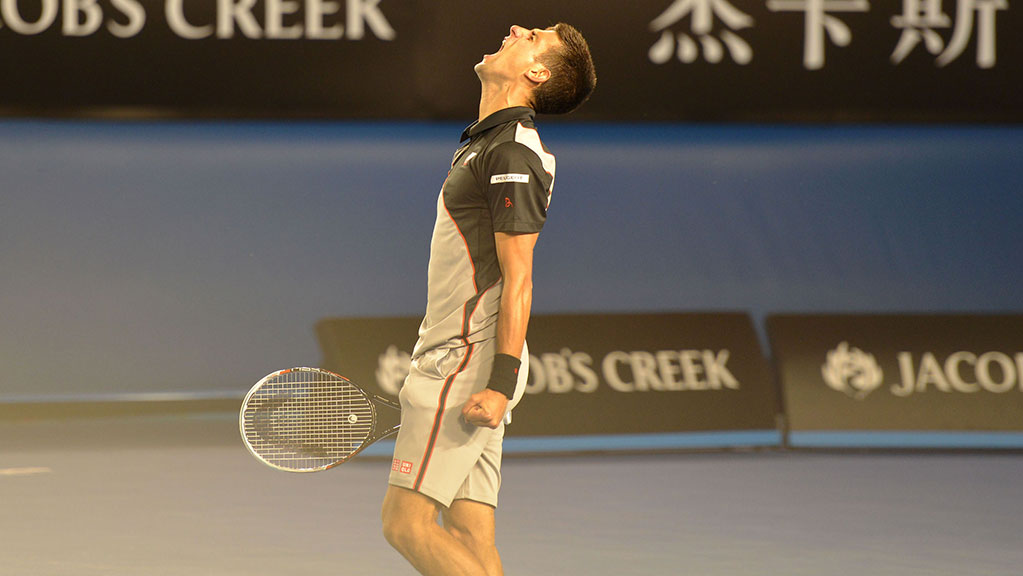 The biggest news of the day happened when no. 2–ranked Novak Djokovic fell to no. 8–ranked Stanislas Wawrinka in the quarterfinals of the Australian Open. Wawrinka had previously lost 14 head-to-head matches against the defending Australian Open champion, including last year’s five-hour five-setter in the fourth round at Melbourne. This time, the Swiss got his revenge, ousting Djokovic, 2-6, 6-4, 6-2, 3-6, 9-7, in four hours of play. Louisa Thomas wrote about Wawrinka during September’s U.S. Open.

For other updates that we don’t want to repeat, check out Spike Friedman’s About Last Night.

In NFL beef news, there’s been one more update in this Richard Sherman–Michael Crabtree saga, with Sherman apologizing in a text message to ESPN’s Ed Werder: “I apologize for attacking an individual and taking the attention away from the fantastic game by my teammates … That was not my intent.” Yesterday, Sherman wrote a column for The MMQB. Look for a possible reaction from Crabtree — or another Sherman follow-up.

The Browns are still the last NFL team without a head coach, and they are no longer waiting for Denver offensive coordinator Adam Gase. The Denver Post reported that Gase withdrew his name from consideration so he could focus on the Super Bowl. Other candidates Cleveland is looking at are Seahawks defensive coordinator Dan Quinn and Bills defensive coordinator Mike Pettine. Now that both parties have chosen to move on, get ready for more news from the Browns front office.

Roger Goodell told the NFL Network yesterday that a league committee would consider abolishing the extra point, though it’s unlikely there will be any formal action soon. However, don’t expect the rumor mill to stop — get ready for a billion posts along the lines of “10 Ways We Can Make the PAT More Fun.”

In a press conference Monday morning, Bill Belichick called Wes Welker’s hit on Aqib Talib “one of the worst plays I’ve seen.” Shots have been fired. Wes Welker, we eagerly await your response.

The Australian Open is in its final stages, and every singles match set for tonight should be entertaining. First up, at 7 p.m. ET, we’ll see Agnieszka Radwanska play Victoria Azarenka and Rafael Nadal going up against Grigor Dimitrov. Worth staying up for is a marquee match between Andy Murray and Roger Federer. If you’re more interested in doubles or juniors play, visit the Australian Open website, which has a complete schedule.

On the NBA side, the most promising game should be the Trail Blazers against the Thunder in Oklahoma City. Both teams are 31-10 and one game out of the Western Conference lead. Russell Westbrook is still out, and Nicolas Batum might be as well with an aggravated broken finger. Portland will try to stop Kevin Durant, who is coming off seven consecutive 30-point efforts. For the rest of the schedule, go here.

For more hoops action, tune in to ESPN for a few fun college basketball games. Big Ten play should be interesting (a.k.a. dominated by the Spartans) with Indiana facing no. 3 Michigan State at Jack Breslin Center at 7 p.m. Adreian Payne will sit for the fourth consecutive game with a sprained right foot, but the Sparties should be OK, as Indiana is coming off a loss to Northwestern in which the Hoosiers shot 25 percent. In SEC play, you can catch no. 14 Kentucky against Texas A&M at 9 p.m. and watch Julius Randle and Andrew Harrison bring their A games. Go here for the full listing of the six other scheduled games.

Lastly, there are 10 NHL games on the schedule, and we’ll draw special attention to two of them. At 7 p.m., the Blue Jackets face off against the Kings as Columbus hopes to extend its win streak (currently at six) to the longest in franchise history. This will certainly be a challenge, as Los Angeles allows a league-low 1.98 goals per game. Another to watch for is the Minnesota Wild against the Dallas Stars at 8 p.m. on NBCSN. Rookie goaltender Darcy Kuemper is expected to get his fifth consecutive start after going 4-1-0 in the absence of Zach Parise (broken foot) and Mikko Koivu (ankle surgery). The Stars have lost nine of their last 10 and are looking to rebound.