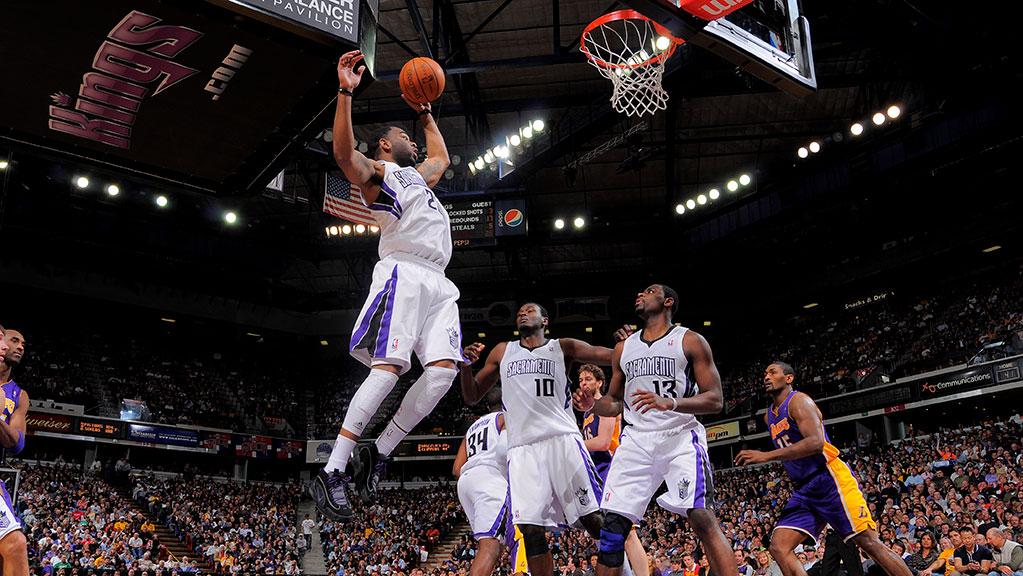 The NBA trade deadline is just over a day away (Thursday, 3 p.m. ET), which means tons of rumors are flying in the air. So far, only one big move has been made, but that doesn’t mean that in the next 24 hours, we won’t see something from the Grizz, the Cavs, the Knicks, or even the Nets — again.

With that, let’s launch into the latest trade deadline news you should be keeping an eye on. Most of the information is courtesy of Yahoo Sports’ Adrian Wojnarowski, because he is the progenitor of all original basketball news:

• The Nets and Kings have finalized a deal to send Marcus Thornton to Brooklyn for Jason Terry and Reggie Evans. This deal would bring the Nets’ salaries and luxury tax to $210 million.

•  The Knicks and Clippers have been talking about a deal that would send Iman Shumpert to Los Angeles. Proposed trades include Darren Collison for Shumpert and Raymond Felton. The Clippers would need to include one additional player in the deal, though, for the trade to be successful capwise. Recent updates from ESPN’s Marc Stein say that though the Clippers want Shumpert and the Knicks want Collison, the Clippers don’t want Felton and don’t want to lose Reggie Bullock.

• The Nets are also pursuing another trade that would get them Jordan Hill from the Lakers. The Lakers have been shopping Hill elsewhere, too.

• The Timberwolves–Grizzlies trade involving Chase Budinger, J.J. Barea, and Tayshaun Prince is still in the works. Minnesota wants Tony Allen as part of the puzzle, but Memphis is standing firm on the other side.

• According to ESPN’s Brian Windhorst, the Cavs have made Luol Deng available ahead of tomorrow’s deadline. Though the front office isn’t bent on trading Deng immediately, they’re testing the waters to see what he’s worth on the market. The forward was shipped out to Cleveland in return for three future draft picks and Andrew Bynum.

• CSNNE.com reported Tuesday that the Celtics were interested in the Jazz’s Gordon Hayward, who played under Boston coach Brad Stevens at Butler. The players on the Celtics’ roster aren’t too appealing to the Jazz, but Boston is reportedly “very reluctant” to give away any first-round picks as part of the deal.

• Despite the Lakers’ and Mavericks’ attempts to trade for the Timberwolves’ Kevin Love, it doesn’t look like anything will happen ahead of the deadline. Love is set to become an unrestricted free agent in 2015 if he declines his player option. He has stayed relatively mum on the issue, other than a recent GQ interview where he said, regarding the Lakers, “we have the better team, the better foundation.”

For more wacky coverage, read Brett Koremenos’s post on preposterous fake trades (that work!), and to keep up with Grantland’s coverage of the NBA trade deadline over the next couple of days, click here.

With the 2014 NBA trade deadline quickly approaching, here are some relevant player-related things we found on the Internet:

Need something beautiful and melodious for your ears? Grab your headphones, enter into your happy place, and play these songs from Iman Shumpert’s mixtape.

Here’s an old (2011) interview with Gordon Hayward about joining a professional gaming league. Gaming, as in video gaming, as in Halo and StarCraft and Call of Duty.

Chase Budinger was once voted the best volleyball player in the nation. During the lockout, Budinger went back to his first love and talks to ESPN TrueHoop’s Henry Abbott about getting back into the sport.

A DraftExpress scouting report: “Raymond Felton possesses tremendous speed and quickness. With or without the ball, he is one of the fastest guards in the country, college or pro. His explosive quickness allows him to beat defenders off the dribble and dash past defenders in the open court. He can change speeds in an instant and is rarely caught off balance.”

And last but not least …

Tonight’s slate of NBA games looks quite appealing. And even if there aren’t super-amazing matchups, at least you have 11 to choose from. If you’re looking for an unpleasant “homecoming” and tons of boos, check out the 10:30 Rockets-Lakers game, where I’m sure Dwight Howard will be welcomed back to Staples with flowers, cupcakes, and smiles. For a “survival of the unfittest” game, check out Pistons-Bobcats at 7 p.m. For some quality “John Wall–Nene-ra ra Wizards” action, tune in at 7:30 (this could also be framed as the “Jeff Teague–Paul Millsap-ra ra Hawks” game). If you want to watch some “great basketball” (whoops, that shouldn’t have been in condescending air quotes), check out Spurs–Trail Blazers at 10:00. If none of those sound appealing to you, well, you’re in luck. You can still catch the Nets-Jazz, Knicks-Pelicans, etc.

If college basketball is more the sport for you, great! We’ve got nine ranked teams playing, though none of them are facing particularly strong opponents. For a massacre, check out no. 1 Syracuse vs. Boston College, no. 2 Florida at Auburn, no. 7 Cincinnati at UCF, or no. 10 Saint Louis at George Mason. You could also catch no. 4 Arizona against Utah, but with the Wildcats’ two recent losses in four games, you might not want to count out the Utes. There are also a smattering of games across the Big East, Pac-12, and Big Ten you can enjoy.