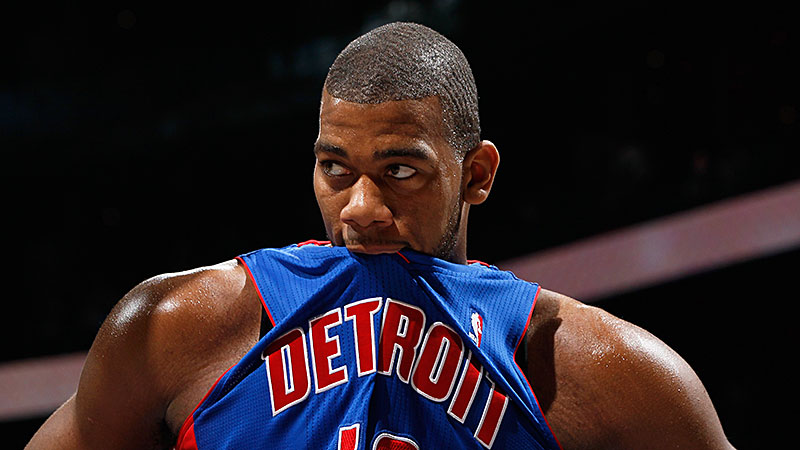 As Zach Lowe pointed out last week, this year’s NBA trade deadline is shaping up to be rather uneventful. Most of the contending teams don’t have the assets or desire to make moves for any big names, and franchises at the bottom of the standings are hoarding their draft picks like clean water during the apocalypse. Given the excitement this time used to bring me as a fan, seeing the biggest rumors from yesterday centered on names like “Marcus Thornton” and “Jarrett Jack” was a major buzzkill. In order to avoid the trade deadline blues, I took it upon myself to concoct a couple of ridiculously convoluted yet somehow borderline-plausible trade scenarios that need to happen in order to ramp up the intrigue.

Why Houston would do it: It’s no secret the Rockets want a frontcourt partner for Dwight Howard who can stretch the floor. At a legit 7-foot-1, Spencer Hawes can complement Howard when they share the court thanks to his accurate outside stroke (he’s shooting better than 40 percent from 3 on nearly four attempts per game), but he’s enough of a physical presence to provide a semblance of interior defense while Howard rests. With most of the West sporting oversize frontcourts, it’d be a major coup for the Rockets to secure a player who allows them to both play big and create driving gaps for their perimeter players. Swapping out the disgruntled, unmotivated Omer Asik for a player with the potential to make Houston an extremely intriguing Finals contender is probably worth accepting a more than reasonable offer.

Why Philadelphia would do it: The Sixers want a first-round pick for Hawes (a relatively fair asking price) but the number of teams with both that valuable asset and a need for Hawes is small. Not even a full year into his first contract, Cody Zeller’s inclusion essentially is the first-round pick the Sixers covet. He hasn’t blown anyone away with his first few months in the NBA, but Zeller has the potential to be a serviceable face-up big in the right system. In Philly, that means he could be asked to stretch his jump shot all the way to the 3-point line. If he proves capable of that, it’d be quite a deal for the Sixers.

Darrell Arthur wouldn’t merely be a salary included to make the deal work under the cap. Despite being a shell of his former self after his devastating Achilles injury, Arthur still has the chance to be a reclamation project. Arthur was once a very accurate midrange shooter, and the Sixers would be wise to work with him on extending his range just a few more feet to the 3-point line. Doing so would create a far more valuable player that Philly could then auction off to the highest bidder at next year’s deadline. It just seems like a move that Sam Hinkie, who has somehow already developed a Keyser Söze–like reputation among NBA bloggers, would be more than capable of pulling off.

Also, since Sixers fan Chris Ryan is a huge Michael Kidd-Gilchrist advocate, I’m contractually obligated to point out that he (or Bismack Biyombo) could be swapped with Zeller and the trade would still work in all facets. That said, Zeller makes this a cooler trade for my bizarro Bobcats that I’ve become infatuated with. No MKG for your Sixers, Chris. Enjoy Evan Turner while you still can.

Why Charlotte would do it: Al Jefferson is in full beast mode, yet the Bobcats are barely ahead of the Pistons, Cavs, and Knicks in the Eastern Conference playoff race. Their success is owed to a stingier-than-expected defense that has tailed off as of late. Enter Asik. Parting with Zeller so quickly seems more than worthwhile in exchange for a big man who can anchor the team’s already solid defense. Asik won’t create ideal floor spacing on offense, but because of where missed shots on post-ups tend to fall, he will still provide tremendous value on that end with his offensive rebounding.

Wilson Chandler is more of a slasher than the spot-up shooter the Bobcats need alongside Jefferson right now, but his acquisition would help make things slightly less congested inside. Chandler’s arrival also boosts a really thin wing rotation that has recently included Anthony Tolliver and Chris Douglas-Roberts. Chandler, MKG, and Gerald Henderson wouldn’t make people confuse the Bobcats for the Spurs, but it’d certainly make Charlotte deeper and more versatile.

With a starting unit of Asik, Jefferson, Chandler, Henderson, and Kemba Walker, supported by a bench consisting of Biyombo, Josh McRoberts, MKG, and Ramon Sessions, Charlotte would be a far more interesting team to watch come playoff time.

Why Denver would do it: You could argue that Chandler could fetch more value than just an expiring contract. However, Denver, a team stuck in no-man’s-land, has to be interested in ditching some long-term salary commitments if the opportunity presented itself. Also consider that Chandler’s position will already be occupied by both a returning veteran (Danilo Gallinari) and a promising youngster (Quincy Miller) next season.

Why Detroit would do it: The Josh Smith signing really put the Pistons in a major bind going forward. As Greg Monroe heads toward free agency, it’s hard to make a reasonable argument why the team should commit a ton of money to two frontcourt players who don’t work well together. Acquiring Eric Gordon in exchange for Monroe removes that unappealing scenario while fortifying the team on the wing.

Gordon isn’t the world-beater some thought he was on his way to being a couple of years ago, but the dude can certainly knock down shots from the perimeter, something the Pistons sorely need. Gordon would join Brandon Jennings in the backcourt, letting overmatched rookie Kentavious Caldwell-Pope come off the bench. Monroe’s departure in the frontcourt means Smith moves to the 4, his best spot, while Kyle Singler slots in at his natural position of small forward. A lineup in which almost no one plays in their preferred role gets replaced by one in which dudes actually complement each other’s skills.

Taking on Gordon’s contract is a risk, but this group would have a far better chance of not just sneaking into the playoffs, but making some noise once they get there. That would be pretty cool thing for a city that badly needs it.

Why Utah would do it: Getting a second-round pick for swapping expiring contracts — and saving money in the process — is a no-brainer.

Why New Orleans would do it: Monroe is a unique talent. His strengths as a passer, rebounder, and post scorer are overshadowed by two serious flaws: defense and shooting. In terms of team-building, that means pairing Monroe with another poor shooter puts a low ceiling on an offense, while pairing him with another subpar defender cripples a team’s chance to compete defensively. To augment his positive traits on a winning team, Monroe’s frontcourt partner would need to be able to shoot and anchor a defense — a really rare combination.

Anthony Davis is a really rare player. Davis is already proving capable of knocking down midrange shots — he’s shooting a respectable 41 percent this year from 15 to 19 feet — and as far as the defensive side of things, well, let’s just say he’s got that covered too.

With virtually no shot of signing Monroe outright in the offseason, acquiring him via trade gives the Pelicans options going forward. If he fares well during the final stretch and both parties find the right deal this offseason, Monroe could join Davis and sharpshooter Ryan Anderson in a very intriguing frontcourt rotation. If Monroe is deemed too expensive, New Orleans can simply let him walk and call the trade a win, thanks to the enormous cap relief it would receive from jettisoning Gordon.

Also, moving Gordon for basically anything makes the Tyreke Evans signing a bit less ridiculous. So there’s that.

I’m just going to leave this here without comment.