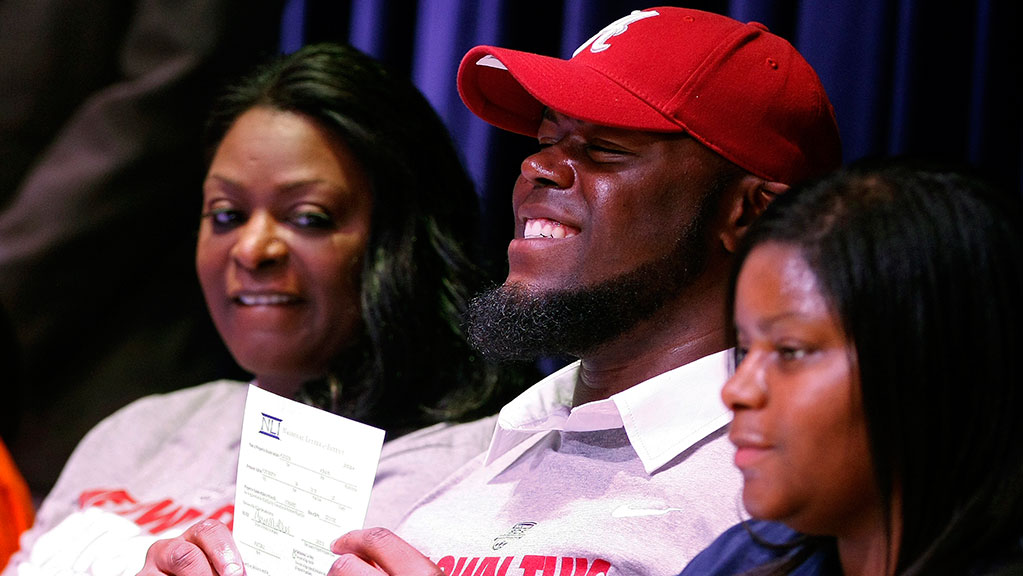 Alabama came away the winner after Wednesday’s college football Signing Day, landing the nation’s top recruiting class with Letters of Intent from 19 players. These new signees, in addition to the eight early enrollees who arrived in Tuscaloosa in January, give the Crimson Tide the best class for the third consecutive year. SEC rival LSU finished second with signings from the no. 1 overall prospect and the no. 1 wide receiver. Following in third and fourth were Florida State and Texas A&M. For a more detailed look, read Bryan Curtis’s report from Travonte Valentine’s hat dance party and Matt Borcas’s National Signing Day 2014 wrap.

In other news, the Lakers resorted to using a little-known NBA rule after entering the game against the Cavaliers with just eight players. After accumulating two additional injuries and seeing a player foul out, the lineup was reduced to five, and when Robert Sacre got his sixth foul, well, here, courtesy of the AP:

Each side has to have five players on the court at all times during an NBA game. With the Lakers down to five healthy players, [Mike] D’Antoni was informed by the officials that he could leave Sacre on the floor and any additional foul on the center would also result in a technical.

With the 2014 Winter Olympic Games beginning soon, here are some fun Sochi-related things we found on the Internet:

Media on the ground were greeted with some not-so-pleasant surprises with their living arrangements, leading to the #SochiProblems hashtag. The New York Daily News compiled a list of fun ones that will make you a little less upset that you’re missing the action in Sochi.

Tim and Dan Graettinger at the data mining company Discover Corps, Inc. came up with a model to predict countries’ medal counts. They used four variables: geographic area, GDP per capita, value of exports, and latitude of nation’s capital. You can read more about their methodology and findings here.

Also, don’t forget to follow our very own on-the-ground writer there, Katie Baker.

In tonight’s NBA games, the Spurs play the Nets (8 p.m., TNT) and the Bulls play the Warriors (10:30 p.m., TNT), whoop-di-doo. One of those could be worth your time … but you’re probably better off watching Parks and — wait, that’s gone till February 27? Well, sorry, looks like you have Stephen Curry, Carlos Boozer, and Joakim Noah written in the stars for you tonight. And hey, maybe both teams will somehow manage to find their shooting.

In college basketball, you’re a little luckier … I guess. There are only three top-25 games featuring four ranked teams, including the recently defeated no. 2 Arizona, the not-as-recently defeated no. 9 Michigan State, and the unbeaten-in-the-AAC no. 7 Cincinnati. This will be your chance to watch Shabazz Napier, Kaleb Tarczewski, Adreian Payne, and Gary Harris. The full listing can be found here.

You have three more days of NHL until hockey goes on a break for the Olympics (don’t worry, you can likely still catch your favorite player then). Cool games could be Toronto–Tampa Bay (7:30 p.m.), Boston–St. Louis (8 p.m., NBCSN), and Columbus–Los Angeles (10:30 p.m., NHL Network). The Lightning are second in the Atlantic Division while Toronto sits at fourth, just three points behind. This game could help swing the standings just a tiny bit. The Kings will look to stop the visiting Blue Jackets, who are 11-3 in their last 14 games. Bruins-Blues will an exciting matchup between two top teams, featuring Tuukka Rask, David Krejci, Jaroslav Halak, and Alexander Steen. The full schedule can be found here.

NBA Shootaround: Clash of the Titans

The Delicate Balance of an NBA Defense