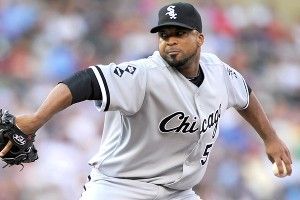 Thirty teams, 30 fallouts from a busy final 48 hours before the trade deadline. Today we’ll cover the American League. Check back tomorrow for the National League.

The Dempster deal gives the Rangers a much-needed starting pitching boost with Roy Oswalt battling injuries and ineffectiveness and Neftali Feliz heading for Tommy John surgery. Soto’s having a terrible year (.199/.284/.347) but he’s coming off two straight 17-homer seasons, as well as an .890 OPS two years ago. The Rangers wanted to upgrade their depth and their catching situation, and they just did both.

The Angels made their big move on July 27, nabbing Zack Greinke for three prospects. One criticism of active deadline teams is their inability to make a deal earlier, thus forcing them to settle for two months of a new acquisition, rather than three months or more. The Halos’ May 3 acquisition of Ernesto Frieri was one of the first notable trades of the season, shoring up a then-shaky bullpen and adding the third-whiffiest reliever in all of baseball.

The A’s did make a move on July 29, getting George Kottaras from the Brewers for Fautino De Los Santos, thus upgrading a terribly weak catching situation. Still, you have to wonder how close Billy Beane and company came to finding a better solution at shortstop than the one they have, especially with pitching depth at their disposal. The battle for the two AL wild-card spots could come down to the last couple days of the season. If the A’s come up a game short, having to settle for Brandon Hicks, Eric Sogard, and an injured Cliff Pennington would be a big reason why.

Landry is a 22-year-old outfielder who shares the same birthday as Red Auerbach, Guy Lafleur, Jim Taylor, Ian Desmond, and a certain Canadian sportswriter with a Saul Goodman fetish. His numbers might not be as legitimate as his birthday, though, having compiled his .917 OPS this year in the hitter-friendly California League. Bawcom is a 23-year-old righty with huge strikeout numbers in the minors, including 60 in 48⅔ innings across two levels this year. He’s got a shot to be an effective reliever in the big leagues. Thames’s numbers are way down this season (.243/.288/.365), but he slugged .456 last year and brings a lefty bat that won’t be quite so squelched by Safeco Field’s Death Valley in left center. He struck out four times more often than he walked in his first 141 big league games. But Thames is still just 25, and has a chance to be a league-average major league bat. The M’s will gladly take these returns for a couple of relievers.

They’d already snagged Kevin Youkilis, Brett Myers, and Francisco Liriano over the past few weeks, upgrading three of their weakest links. Still, the rotation’s a bit of a concern. Chris Sale’s recent bout of dead arm is troubling, as is John Danks’s being declared out for the year. The Sox figure to lean heavily on the rejuvenated Jake Peavy down the stretch. For the first time in four years, it might not be a crazy idea.

There were whispers of a possible Alfonso Soriano deal but nothing materialized, leaving Delmon Young free to make outs for a living. This is still a strong team, though, with Anibal Sanchez and Omar Infante offering reinforcements and the three resident superstars living up to their billing. They’re 2½ games out of first with two months to go, but the smart money should still be on Detroit to repeat in the AL Central.

There was talk of Shin-Soo Choo to Pittsburgh or Texas, but those discussions fell through, leaving the Indians in limbo with other fringe contenders. Anderson, once a top first-base prospect, gets a fresh start in an organization that’s painfully short on quality first basemen at the upper levels.

We can never be sure exactly how trade discussions went for any given team. But the Twins’ preemptive stance that they wouldn’t trade Josh Willingham, an injury-prone player having a career year at age 33, seems woefully misguided. Terry Ryan has a reputation for making his biggest moves while clear-eyed in the offseason, rather than trying to slice through the madness at the trade deadline. With marketable and affordable chips like Willingham and Denard Span around and a desperate need to land high-ceiling pitchers, we hope this winter brings more action.

Looking for a deep sleeper for best-value move? This might be it. In exchange for a walk-year reliever, the Royals landed Sulbaran, an erratic right-hander but one with enough swing-and-miss stuff to fan more than a batter an inning in 81 career minor league starts. Meanwhile, Joseph has fanned 279 batters in 208 career innings on the farm and could be a contributing member of the Royals’ bullpen as soon as next season. Nice haul for a walk-year reliever.

McGehee owns a respectable .250/.344/.463 line versus lefties this year, addressing the team’s need for a competent right-handed bat who can handle both corner infield spots. Qualls is a walking disaster who was about to get booted in favor of Joba Chamberlain. For a Yankees team that’s notoriously quiet at the deadline given their ample resources, getting McGehee (and Ichiro a few days earlier) constitutes a successful haul.

Andrew Friedman has made two deadline deals in five years. Everyone on the team except Fernando Rodney and Jeff Keppinger has either matched or drastically undercut preseason projections, and Evan Longoria’s working his way back from a hamstring injury, meaning status quo and regression to the mean could help more than any trade. Payroll space is limited, and players like James Shields might not have fetched the return management would have wanted. Frustrating as hell to see the Rays stand pat when they have a shot at four playoff berths in five years. Also understandable.

Wright’s arrival brings another knuckleballer into the Red Sox system, filling the void left behind when Tim Wakefield celebrated his 90th birthday and finally retired. Talk radio was blazing with the hope that Josh Beckett would be exiled to Siberia, but nothing happened there. On the fringes of wild-card contention, with an injury-riddled roster and several borderline unmovable contracts on the payroll, standing pat (other than upgrading Albers with Breslow and boosting the supply of deadpan jokes) was the most likely course of action all along.

The Jays really, really, really, really wanted relief help. A week and a half ago, they traded seven players for three relievers. On Monday night, they dealt two young outfielders for another bullpen arm and a swingman. Lincoln and Snider were both first-round picks in 2006, and both have disappointed their employers since. But Snider feels like the bigger upside play, and thus the bigger loss. Still just 24, he’s got some big minor league seasons under his belt, and hasn’t had much of a clean shot to win a starting job in the majors, and stay there. Lincoln is more performance than potential at this point, with a strikeout-to-walk rate above 4-to-1 working mostly in relief this season. Toronto still seems to fancy itself a contender this year, which is fine given the advent of the second wild-card spot. But you wonder if one of the Jays’ July deals will come back to haunt them. If any of them will, it seems like giving up on Snider is the most likely candidate.

Melo and the Fab Five