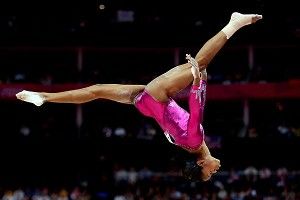 If you haven’t been reading Shane Ryan’s Olympic Viewing Guides … well, you should be reading Shane Ryan’s Olympic Viewing Guides. Shane has traded his sanity and sleep schedule to watch pretty much every jump, leap, shot, throw, heave, dive, and vault of these games, so we could think of no better person to wrap up this first week with a list of the top 10 moments of Olympics so far.

We’re nearing the end of the first week, so I thought I’d take this moment to run down my top ten memorable moments of the London Games so far. Yes, these will be incredibly Americo-centric (it doesn’t matter if that’s not an English word, because we’re not English). There have been a slew of incredible athletes, dramatic finishes, and inspirational stories, and no list comes without debate. But here’s my list, and keep in mind that it’s the correct one. Live Extra video links are included.

10. Judo — Kayla Harrison wins Gold
After I spent the last few days dismissing judo, it was probably inevitable that an athlete like Harrison would not only win, but do it by overcoming unthinkable abuse to become America’s first gold medalist in the history of the sport. Amazing story, and now I live in a world where judo made me cry.

9. Beach Volleyball — Rogers & Dalhausser Win on the Shoulder of God Point
The coolest sport of the Olympics, beach volleyball has a lot more in store over the next week, but the coolest moment so far came when Rogers double-touched at 13-12 in the third set, but got away with it. The Americans won two points later, and went on to win the group as the Spanish fumed. A rematch between these teams is almost too epic to consider. (By the way, Kessy and Ross surviving two match points against the Czechs yesterday could easily be on here too.)

8. Swimming — The French Agnel of Death
The 4×100 freestyle relay is reliably the most exciting, epic event in the swimming program, and it delivered again in London. This time, in a reverse of 2008, the French anchor Yannick Agnel went ahead and Lezak’ed the hell out of us by swimming a ridiculous final 100 (in a time that bested the current individual world record, no less) to overtake Ryan Lochte and win gold. A day later, he beat Lochte again in the 200 free.

7. Swimming — Phelps Buries the Lochte Legacy (no video yet)
There is, indisputably, only one Michael Phelps, and by beating Lochte in the 200 IM, he ended the disappointing individual campaign of his major rival with a mano a mano triumph. With that result, coming on the heels of Lochte’s third-place finish in the 200-meter backstroke, it became inevitable that the thing we’d remember him for in London was losing. I half expected Phelps to rise out of the pool and yell, “THE KING STAYS THE KING!”

6. Volleyball — Destinee Hooker and the Americans Beat China
It was only the third set, and the Americans had a semi-secure 2-0 lead, but somehow the tension was ratcheted to extreme degrees as the Chinese fought like hell to extend the match. In the end, the U.S. came back from the brink of defeat, and back-to-back kills by Hooker and Megan Hodge gave us a 31-29 win.

5. Fencing — Crying on a Lonely Piste
Shin A-Lam lived out everyone’s nightmare — all alone, on a lighted stage, crying while everyone watched. After losing a semifinal on a controversial decision, she had to stay by herself for nearly an hour while an appeal was filed. The appeal failed, she lost the bronze medal match, and I’m not sure any athlete’s heartbreak has ever been quite so public.

4. Cycling — Alexander Vinokourov Wins the Road Race
Legendary figure in the sport, 38 years old, racing in his final competitive event. Breaks away early in a risky maneuver, but Bradley Wiggins and the other Brits can’t lead Mark Cavendish across the gap, and out-sprinted Rigoberto Uran at the finish. Not a bad way to retire, right? As one of the first medals on day one, this was the unmistakable sign that we were in for an awesome Olympics.

3. Men’s Archery — The Heretic Archer Breaks our Hearts
Italy’s Michele Frangilli stepped up against the Americans, with one arrow left, needing a 9 to extend the match and stave off a furious comeback. He hit a 10. DAMN YOU, HERETIC ARCHER!

2. Swimming — Nathan Adrian Wins the 100-meter Freestyle by .01 seconds
The best and most dramatic finish of the swimming program, achieved by an unexpected swimmer. The Lezak moment of these Games may have gone against the U.S., but at least the Phelps-butterfly moment went our way.

1. Gymnastics — U.S. Women Win the Team Gold
It’s an event that defines the Olympics, and we beat the Russians and Chinese. What could be better? Special credit to Jordyn Wieber, who showed deep resilience after her qualifying heartbreak, and to Gabby Douglas, who went on to win the individual all-around.