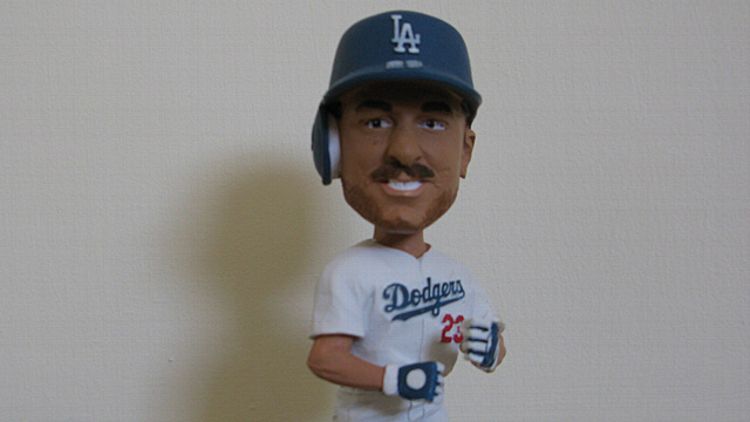 Aside from amusement-park caricature, is there a type of portrait more unflattering than the bobblehead? When seen straight on, the features on the Kirk Gibson “Fist Pump” Bobblehead look remarkably rat-like, with its bared upper teeth, narrow eyes, and protruding snout. The rugged stubble looks like an unnatural affectation, like how Hulk Hogan used to paint his on during the Hollywood Hogan days with the NWO. I won’t get into the signature fist-pumping motion, which some have already suggested makes the bobblehead look like it’s taking some practice swings with its li’l Louisville Slugger (though I guess I just made a little dig there anyway). I know I’m being overly cruel, but that’s what happens when the hero in the major narrative is the villain in your minor one.

Like political affiliation and predisposition toward the films of Woody Allen, which baseball team you root for often comes from your parents. So I was born an Oakland A’s fan. My folks adopted them as soon as they moved to the city in 1974, their own childhood teams having abandoned them long ago — my mother’s Braves left Milwaukee for Atlanta and my dad’s Brooklyn Dodgers relocated to Los Angeles.

The A’s were always in my life, but it wasn’t until 1988, when I was 10 years old, that I became a true follower. It was an easy time to get deep into the team: the brash charisma of the Bash Brothers, the rebirth of Dennis Eckersley as a steamrolling closer, the affable free agent Dave Henderson and his clinched batting stance that we emulated on the playground … There were so many excellent characters and mustaches to grab hold of.

I started collecting baseball cards. Every morning I pored over the box scores in both the Oakland Tribune and San Francisco Chronicle. I once went to a half-vacant new shopping center in Alameda to get a ballpoint pen autograph from backup left-handed catcher Ron Hassey — I guess he was the guy that the “guy who knows a guy” knew.

The ’88 A’s seemed destined for greatness, and I was sitting in the second deck when they easily clinched their playoff spot after a fly out to Luis Polonia in left field.

And then came Kirk Gibson. I’d first really seen him on a wood-grain patterned Topps card back when he still had an Old English “D” on his navy blue ball cap. Known for his unrelenting determination, in 1988, his first year with the Dodgers, Gibson led them to the National League West title and was later named the league’s MVP. And if the accounts from that year’s spring training camp are true, he also seemed like kind of a dick.

The tales behind Gibson’s two-out, full-count home run in the bottom of the ninth to win Game 1 of the World Series against the A’s are already legendary: how both of his legs were so jacked that he could hardly stand, how he spent the game lying on a physical therapist’s table, how manager Tommy Lasorda didn’t reveal Gibson as the pinch hitter until the very last moment in order to wage psychological warfare on Dennis Eckersley. And that warfare worked, not just on Eckersley, but also on the A’s and A’s fans for the rest of the series. Even as a 10-year-old, I knew the moment that ball hit the bleachers that the mental wounds wouldn’t be healed in time. The A’s lost in five. It was Gibson’s only at-bat of the series. I still feel the need to look away whenever it’s replayed.

It was Kirk Gibson and his goddamn stupid fist pump as he galloped around the bases that night that taught me that being a sports fan is really about learning to cope with disappointment, not awaiting inevitable victory. I was with my friend Luke, a long-suffering Red Sox supporter, in Los Angeles when they finally won the World Series in 2004. After the final out he didn’t seem ecstatic, he seemed relieved. Later he went to a bar with some casual fans in town from New England, but the next day he told me that the best part of his night happened around 2 a.m., when he spent a few hours eating french fries at Canters deli with a fellow obsessive, remembering every third-string infielder and middle reliever who had come through the organization since they’d been fans.

And ultimately I know I should let the Kirk Gibson thing go, that it’s a stupid sports grudge that doesn’t matter. But the reality is that I’ve lived in Los Angeles for almost a decade and I’ve loved it from the start. I’ve also got kids now, and I figure by next season my older one should be good for a solid five innings at the stadium. I want us to share a team, and it doesn’t seem right to make my kids cheer for guys who come through a handful of days out of the year and play in a city that I haven’t lived in since Too $hort retired the first time. Kirk Gibson’s home run is arguably the greatest moment in Los Angeles sports history, and it’s the reason I can’t commit to becoming a Dodgers fan.

2012 marks the 50th anniversary of Dodger Stadium. The 10-game Bobblehead Dodgers Greats giveaway series is the anchor of this year’s promotional schedule. In all, 15 Dodgers icons will be featured in the series, including a four-figure bobblehead of “The Infield” (Steve Garvey, Davey Lopes, Bill Russell, and Ron Cey), as well as the first bobbleheads for Sandy Koufax and Vin Scully. “Promotions, specifically bobbleheads, drive this market and attendance like nothing I’ve ever seen,” David Siegel, the team’s incredibly helpful senior director of ticket sales, told me. “Dodgers fans really gravitate toward them.”

On Tuesday night, they gave away the Kirk Gibson “Fist Pump” Bobblehead during a game against the Arizona Diamondbacks, the team that he now manages. Of the 48 bobblehead promotional nights, it’s the second time there’s been a Gibson bobblehead giveaway. The first came in 2001, the year they started.

Before the game began, I saw people cradling two or sometimes four Kirk Gibson bobblehead boxes, their minds full of mantle tchotchke dreams. (As of this writing, unopened bobbleheads are going for about $30 apiece on eBay.) The game’s crucial action happened in the first inning, when most of the crowd was still dealing with traffic — a two-out, two-run homer from Paul Goldschmidt that gave the Diamondbacks a lead they never seemed in danger of losing, even after the Dodgers quickly responded with a run of their own. Still, the crowd stuck in there. In the bottom of the sixth, after an earlier three-run shot from the D-backs’ Miguel Montero had put the game out of reach, the fans hung its hope and wave-making determination on a single to center from new hero Matt Kemp that led to nothing.

I watched most of the game from the upperest of the upper decks, where the surreptitious cigarette smokers loitered and older gentlemen spent the late innings chatting familiarly with the security guards. I ate a Dodger Dog and watched an Orange Fanta sunset over Parking Lot 6. I stood for long periods in the “No Standing” area near the entrance to sections 6 and 8, next to a pillar decorated with a picture of a post-climax Gibson from Game 1 of the World Series, his right arm raised above his head and his open mouth hollering. At the top of the eighth, a couple in their 30s came by and giddily took camera-phone pictures of each other next to the image, smiling and holding their bobbleheads next to it. I asked if they wanted me to get a shot of the two of them together with Kirk Gibson, and they were grateful. I had a good night.

For now, my own Kirk Gibson bobblehead is still in its box, up high on a shelf in my closet. It’s next to the backup Buzz Lightyear action figure and the age-inappropriate toys people have given my sons as birthday presents. Sometimes, in my forgiving moments, I imagine that the Kirk Gibson bobblehead will serve as a peace offering from the Dodgers franchise to me and my family. We will become fans, and to my sons, the team’s triumphs and mistakes that came before they were born will be their triumphs and mistakes—part of a collective history of fandom that they share with this whole strange and hilarious city.

And then, admittedly, there are still other times when I want to unsheathe the Kirk Gibson bobblehead from his cardboard coffin, separate the two pieces of protective Styrofoam packaging, pull it from its plastic baggie, turn back the clock, and smash it on my concrete patio, breaking those legs for good.