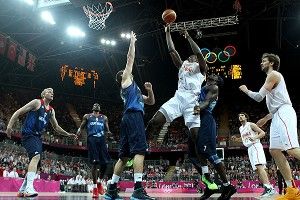 Because Spain qualified for the Olympics by winning 2011’s EuroBasket, a large slate of preparation games was replaced by a long pre-Olympics training camp. During those limited opportunities, we did get to see just how good Spain can be. In its game against Great Britain (in which Spain competed without some of its key players), it was easy to see why many consider them to be the main threat to Team USA’s gold medal run.

Spain’s offense involves a lot of movement — and in this case, that means moving both the basketball (with quick, pinpoint passing) and the players (with sharp cuts and screens off the ball). One particular set best exemplifies their offensive philosophy and just how dangerous it can be. 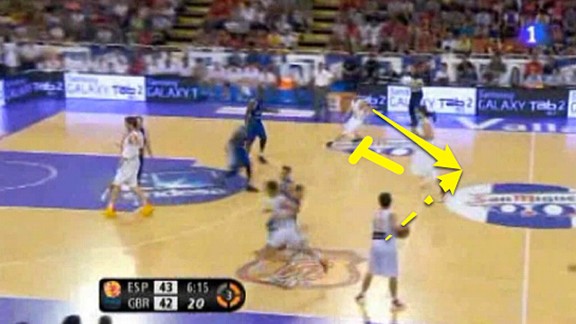 The set starts with the Spanish point guard holding the basketball on one side of the court (in this case, the left side). The trailing big — Marc Gasol on this play — sets a brush screen for the wing player on the opposite side of the court. The wing comes off the screen and gets the ball at the top of the key. 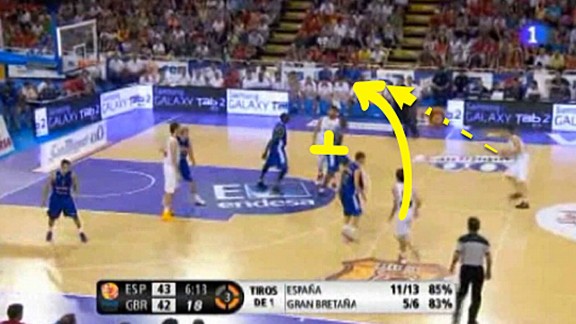 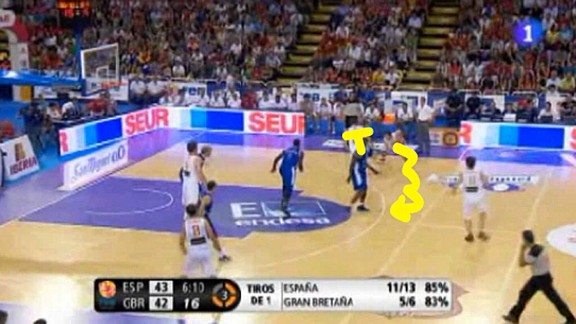 Gasol then sets another screen, this time of the ball variety. At this point, it’s just pick-and-roll basketball. Here’s how it looks in real time.

This set from Spain is just a complicated way of getting into a simple pick-and-roll action on the wing. The reason the play is successful is that it gets the basketball moving from side to side, which causes the defense to shift, and then leaves them unable to load up and protect against the pick-and-roll. Even if the final swing pass is taken away, Spain has developed a simple counter.

Instead of swinging the ball to the wing and setting the ball screen there, the trailing big man recognizes that the swing pass can’t be made and sets a high ball screen at the top of the key. Again, the movement of the ball and players keeps the defense moving and leaves them unable to defend against this set. If the defense takes away the swing pass, they’re not in a position to defend the high screen It’s a pick-your-poison situation.

The Gasol brothers are the household names on the Spanish National Team, but it’s their backup, Serge Ibaka, who’s the key for Spain. Since there are plenty of offensive options for Spain, Ibaka isn’t relied upon for consistent scoring, but if the defense plays off him, he can make them pay.

Ibaka doesn’t really have a specific play type he uses to score, but he is effective at waiting for his man to make a mistake and then taking advantage, whether it’s cutting to the rim for a lob or popping out and knocking down the 15-foot jumper. At times, Ibaka will also get involved in setting ball screens and rolling to the rim hard in the hopes of a lob or put-back attempt. This is a role Ibaka is familiar with because of his experience with the Thunder.

Contender. Spain is probably the biggest threat to Team USA’s run to the gold medal. The team is playing with confidence and always seems to present trouble for the U.S. If Spain can get contributions from everyone on the roster, they will have a chance against Team USA.

That said, Spain has had some trouble so far in these Olympics. They scored just 79 points in their one-point win over Great Britain — their lowest point total of the Games thus far. So is there anything we can take away from that game? Yes. Spain is a team that loves to utilize the spot-up jump shot (as labeled by Synergy Sports.) In 11 games played this year (we’re counting prep and Olympic games here), Spain has “spotted up” 24.2 percent of their total possessions, posting a PPP of 1.066 on those plays, good enough for an “excellent” rating from Synergy. Against Great Britain, Spain scored just 10 points on 20 spot-up possessions.

So what did Great Britain do? They corralled the point guard in pick-and-roll situations, only dedicating two defenders to doing so, allowing corner defenders to “stunt” and recover, resulting in quicker closeouts and tougher shots. Great Britain seemed determined to run guys off their shots, close out hard, and live with the consequences. In fact, they were so good at contesting shots that out of their 20 spot-up possessions, Spain took just two unguarded shots.

This should make the U.S. happy, because they can do it, too. With Tyson Chandler as their big (and even when they go small), they can corral the ball handler in pick-and-roll situations, meaning they can stay home on shooters, too. They are a more athletic team than Great Britain, so they can close out just as hard, forcing Spain into tough shots.