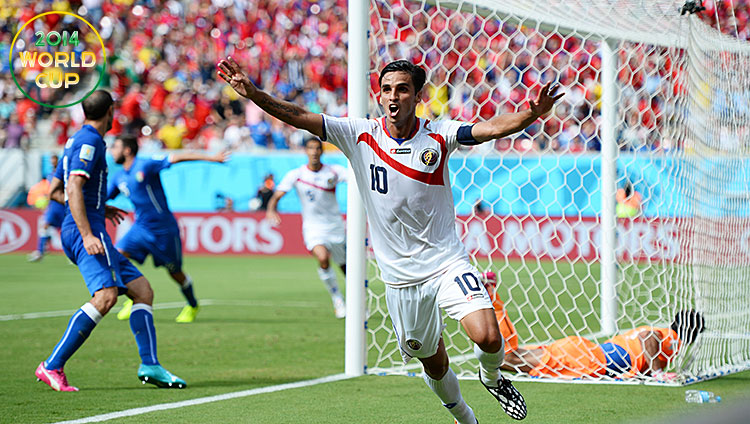 In a World Cup defined by vibrant, attacking soccer, the biggest surprise is a tiny Central American nation featuring one of the best goalkeepers in the Spanish league and an impenetrable five-man back line. Costa Rica is, somehow, very much for real.

The run to the round of 16 began with a defeat of Uruguay. Costa Rica went down early in that match, after an Edinson Cavani penalty kick, and the world sighed in predictable fashion, preparing for a dull game between a have and a have-not. It was only the second day of the tournament and we didn’t know that this tournament would be filled with excitement and unlikely comebacks.

The Ticos knew, apparently. Joel Campbell, the team’s 21-year-old, Arsenal-owned, attacking starlet, scored the equalizer 10 minutes after halftime, then Oscar Duarte tallied the game winner just three minutes later. Marcos Ureña, a forward who plays his club soccer for Kuban Krasnodar in Russia, which is a long way from San José, added an insurance goal six minutes before the end of the match.

In its next match, Costa Rica — spurred by an impressively partisan crowd of 40,285 at Recife’s Arena Pernambuco — out-Italyed Italy. The team absorbed early pressure, with center backs Giancarlo González and Michael Umaña marking Mario Balotelli into ineffectiveness. Then they pressed forward and found a goal through captain Bryan Ruiz. The Italians failed to mount any semblance of an attack during the second half, and Andrea Pirlo was frustrated into a shimmering simulacrum of himself.

Costa Rica was through to the next round. Back home, the country of 4.5 million — one World Cup player for every 200,000 people — took to the streets.

If you paid attention to the United States’ qualifying journey, you might have seen Costa Rica’s success coming. The team finished second behind the Americans in CONCACAF World Cup qualifying, and played the U.S. tight in both games. First, there was the Snowclasico. Costa Rica battled hard in exceptionally adverse conditions and nearly escaped the altitude and the elements in Colorado with a point. In September, Jorge Luis Pinto’s squad crushed a Michael Bradley–less Red, White, and Blue in San José. The blueprint of that match — opportunistic attacking, organized defending, harass, harass, harass — is the same one the coach is using to perfection in Brazil.

This isn’t the first time Costa Rica has had success on the international stage. They reached the knockout stage in 1990, qualified for the World Cup in 2002 and 2006, and came within a Jonathan Bornstein goal in the 94th minute of making it to South Africa.

In the past, the core of the Costa Rican team was drawn from Deportivo Saprissa, the biggest and most successful club in the Costa Rican Primera División, along with a few others who managed to reach Europe. The 2014 version, however, features only two Saprissa players, and 15 on teams outside the country. (The rise of Major League Soccer is improving Costa Rica, too.) Considering the victories in Brazil, players from the “rich coast” will be in more demand following the World Cup.

On Tuesday, Costa Rica gets already-eliminated England in the final match of the group stage. Any type of positive result means Costa Rica finishes first in Group D, with a likely tilt against Ivory Coast back in Arena Pernambuco. The quarterfinals aren’t that far out of reach, which would be the country’s best result ever at the World Cup. According to stats guru Nate Silver, it has a 1 percent chance to win this thing. A small opportunity for a small country sounds just about right. These Ticos can handle the biggest of stages.