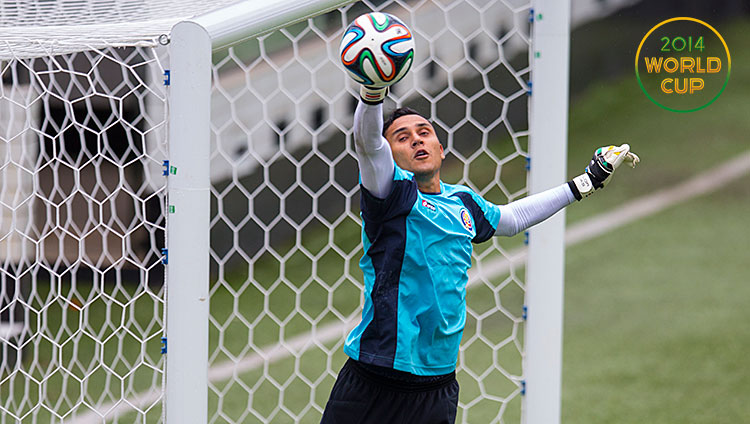 There’s a famous bit in Eduardo Galeano’s brilliant Soccer in Sun and Shadow about what a joyless vacuum being a goalkeeper is. “Never leaving the goal, his only company the three posts,” Galeano writes, “he awaits his own execution by firing squad.” And it’s an inevitable execution: “It’s always the keeper’s fault. And if it isn’t, he still gets blamed.”

It makes sense, then, that this book — which, it must be said, might be the most beautiful single collection of sportswriting ever published — came out before Keylor Navas joined Levante.

The 27-year-old Costa Rican led La Liga in saves this past season, which doesn’t necessarily say anything beyond “he faced a lot of shots.” By comparison, Navas made 150 saves, while Thibaut Courtois, widely considered the best goalie in Spain, made 71. Courtois led the league with 19 clean sheets, but Navas tied for second with 16. And yet he faced the second-most shots in all of Spain. Somewhere within all of that, there’s something that says Navas is a pretty damn good keeper.

What Galeano’s writing about, though, is the reactive, limited nature of being a goalie. They literally paint a box to keep you from going anywhere, and the better your team (and, presumably, the better you are), the less shots you face, and the less of a chance you have to actually affect the game. And even when you do affect it, it’s because you’re giving up a goal; making a save just keeps things where they were. The top goalies, in a general narrative sense, just fuck up the least.

Navas, though, looks at this idea, watches it get floated into the box, sees it volleyed toward his goal, and then slaps it out of the top corner with his fingertips. As much as a goalie can make things happen, Navas does. The way we watch keepers can’t be divorced from the teams they play for — and Levante is not a very good team — but take this quote from a scout: “He seems to thrive against quality opposition. The tougher the opponent, the better he does; it elevates the whole team.”

The more shots he faces, the better he plays. Or at least, the better he seems to play because he’s playing more. And come the World Cup, where he’ll be anchoring a depleted Costa Rica side getting battered by the meteor shower of Luis Suárez, Edinson Cavani, Mario Balotelli, Wayne Rooney, and Daniel Sturridge, he’ll have plenty to do. Costa Rica’s not going anywhere beyond their third game, but Navas might just be able to ruin someone else’s tournament before Los Ticos head home. He almost single-handedly created the end-of-season chaos in La Liga with a shutout against Atlético Madrid and some reflex-heroics on Messi in a tie against Barcelona.

Levante bought Navas for right around $200,000, roughly equivalent to a handful of cereal box-tops in the world soccer market. He’s young for a keeper, which suggests he’ll soon be leaving the Valencia-based club for a bigger team (ironically enough, there’s rumored interest from Atlético Madrid). Maybe then he won’t get as many chances to do what he does best, and we’ll have to start talking about him in a more sophisticated way. But not until after the trio of matches in Brazil.

“I go about the world,” Galeano writes in the book’s intro, “hand outstretched, and in the stadium I plead: ‘A pretty move for the love of God.’”

Give him a pen, and Navas might write the same thing.

The Quick and the Dead: The Resurrection of the Kings Goalie