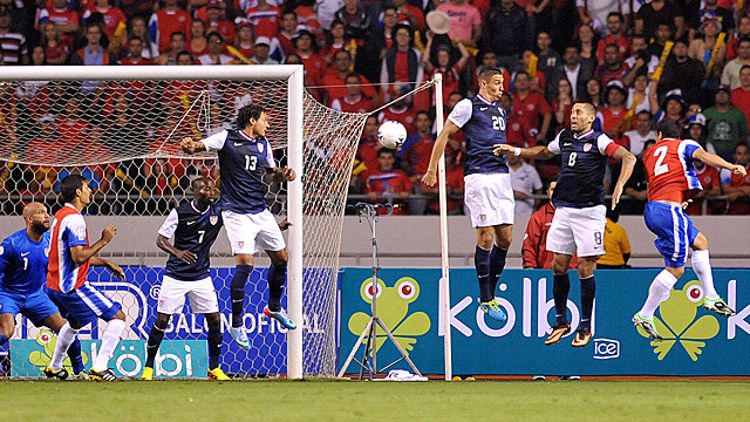 So, the United States men’s national team went to another tiny Central American nation in World Cup qualifying and lost, falling 3-1 to Costa Rica on Friday night. I thought we were done with this type of ridiculousness.

Short answer: no. Medium answer: Welcome to CONCACAF. Longer answer: It meant more to the Ticos, and it showed. Costa Rica was pissed because the U.S. made them play in the snow (even though they wanted to continue, too, but whatever), and because Jonathan Bornstein (!) kept them from the 2010 World Cup in the most dramatic fashion possible. Manager Jorge Luis Pinto promised that his squad would go into the match “with hot blood and cool heads,” which is a wonderfully lyrical thing to say and, you know, exactly what happened as they scored in the second minute (déjà vu) and again in the ninth.

Did USMNT coach Jurgen Klinsmann have an excellent response when a Costa Rican journalist asked him if the Ticos were a superior team?

He smiled and said “When you win 3-1, you have the right to say you were the better team.” Jurgen Klinsmann wins World Cups; Jurgen Klinsmann does not suffer fools or put up with dumb questions with obvious answers.

@GrantWahl @BrianSciaretta picture of all of Bradley's weight on his ankle moment of injury. pic.twitter.com/GJaH7E6WTk

Crap. What is going on there?

Michael Bradley is spraining his left ankle about five minutes before kickoff. He limped off the field in obvious pain, prompting the already schizophrenic American soccer Twittersphere to explode in agony. Though Geoff Cameron replaced the Roma midfielder, physically, in the starting lineup, he couldn’t bring Bradley’s calming influence or his organizational brilliance. For an example, see two goals in nine minutes.

Is Bradley really that important to the U.S.?

He’s the yin to everyone else’s yang. Klinsmann said the last-second switch “shocked the team,” and it’s understandable that the U.S. — never very good at starting matches — was a little off without its best player and rattled by 35,000 screaming fans. But Bradley’s absence created an Oguchi Onyewu–size hole. His ability to intuitively understand what the Americans need at any given moment and be in the right place to provide it is his best skill. He’s an exceptional player, even if he does nothing exceptionally well. He can’t be any of that while holding crutches on the bench with an enormous ice wrap on his leg.

Should we worry about qualifying for Brazil?

Despite the loss to Costa Rica, the U.S.’s odds of reaching the World Cup actually jumped up to 99.9 percent thanks to Mexico’s implosion and Panama’s draw with Jamaica. What you should worry about is finding somewhere to stay in Rio or Sao Paulo that won’t cost you the equivalent of Clint Dempsey’s weekly wages.

That’s comforting. Did anything good happen in Costa Rica?

The stadium is very nice.

Otherwise, it depends on how hard you would like to try to make the glass half full. While Landon Donovan called it the U.S.’s “best game” ever in Costa Rica, that’s not saying much considering the team was 0-7-1 all time in qualifying. But the Americans did control the match between roughly the 30th minute and Joel Campbell’s fluky goal in the 75th that iced the game.

Afterward, the general consensus among the U.S. players was that a draw was out there to be had. And they had chances; Clint Dempsey, who earned his 100th cap on the night, drilled the post in the 56th and then hit an open header right at Costa Rican goalkeeper Keylor Navas in the 70th. But maybe also don’t concede two goals almost immediately and force yourselves to play from behind. Again. And then there are the yellow cards …

What about the yellow cards?

Eight players — Jozy Altidore, Matt Besler, Michael Bradley, Geoff Cameron, Dempsey, Tim Howard, Fabian Johnson, Jermaine Jones — went into Friday night’s game carrying a caution. Getting one against Costa Rica meant they would receive a one-game suspension and miss Mexico. The referee in San Jose was Marco Antonio Rodriguez, who looks like Dracula and also happens to be Mexican, which did not please Klinsmann.

The ref handed out cards to Cameron, Besler, and Altidore. Cameron’s was fine, a run-of-play foul that happens in soccer games. Besler’s, which was called by the assistant referee, was an atrocity, a phantom foul 60 yards from the action. Klinsmann has cause to protest. Altidore’s card was all on Jozy, though. He made the stupid decision to straight-up shove a Costa Rican defender for no reason. He lost his head, and he’ll lose his spot to play against Mexico.

So, Bradley’s out. Two center backs are out. The starting forward is out. Who, exactly, will play on Tuesday?

Don’t forget about John Anthony Brooks, the 20-year-old center back of the future who started against Bosnia and trained last week with the U.S. He went back to his club, Hertha BSC, on Saturday morning, which was the plan all along. Klinsmann has called in reinforcements in the form of Joe Corona, Brad Davis, Clarence Goodson, and Jose Torres. Goodson is likely to start next to Omar Gonzalez. That duo shut out Costa Rica in the snow in Denver. Kyle Beckerman, who played the Bradley destroyer role so effectively during the Gold Cup run, will probably get a chance to do so on a bigger stage, joining Jermaine Jones in central midfield.

Can the team Klinsmann puts on the field Tuesday night beat Mexico?

Definitely. There are issues, especially at left and right back because there are always issues at left and right back, but Klinsmann has enough talent to get a result. The home crowd will help, too. And Mexico, which is fourth in the table and fired its coach on Saturday, is reeling. While the “can the coach” strategy has worked in previous Hexagonals, Tuesday’s game comes too quickly for Luis Fernando Tena to have much effect. Plus, all the pressure is on El Tri since this is very nearly a must-win. If the Americans can avoid giving up an early goal — I know, I know — they will be fine.