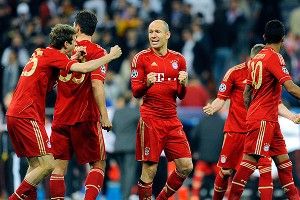 Chelsea Finally Got Some Luck

Chelsea have long been blamed for committing modern football’s original sin. Just replace the forbidden fruit with a soft drink.

As the story goes, in 2003, Russian oligarch Roman Abramovich nearly took control of Tottenham Hotspur, but when a meeting to purchase the North London club fell through, Abramovich bought the West London team from Ken Bates over a Coca-Cola at London’s Dorchester Hotel. He soon introduced an era of financial doping into European football, blowing traditional powerhouses like Liverpool and Arsenal out of the water when it came to transfer fees and player wages. Abramovich proved that everything had a price, even the Premier League title. It’s a recipe followed by the likes of Sheikh Mansour at Manchester City and screwed up by Bernie Ecclestone at Queens Park Rangers.

Ever since Abramovich took over Chelsea, the one thing he has coveted most is the Champions League trophy. It is a symbol, something that would establish his new-money-funded project with the old boys of Bayern, Barca, and Juve. And it is the one thing that has eluded him — cue the dramatic music — until now.

This Champions League run of Chelsea’s has followed a different kind of narrative arc than years past. They are, improbably, the little blue engine that could. An aging side, playing under the direction of an interim manager who was making out the team sheets for West Brom last February, Chelsea have beaten the odds again and again. They came back from a 3-1 deficit against Napoli, beat a strong Benfica side, home and away, defeated Barcelona at Stamford Bridge and — in one of the bigger upsets in recent Champions League history — drew with the defending champions at the Camp Nou, even though they played most of the game a man down.

This Chelsea side have the one thing previous incarnations of the team have always lacked in Europe: luck. Lionel Messi missing a penalty kick? Withstanding the Barcelona attack, even though they were without their captain, central defender and moral rock (LOLs), John Terry? A late-game tie-sealer from Fernando Torres the friendly ghost? Some kind benevolent force was smiling down on Chelsea on Tuesday. Wonder how much that ran Roman.

Barcelona Don’t Need a Plan B, They Just Need a Different Plan A

When Athletic Bilbao manager Marcelo Bielsa was asked whether he needed a Plan B to his all-out attacking style, going into the second leg of his team’s Europa League semifinal on Thursday, the enigmatic Argentine said, “I do not believe in Plan B.” It should come as very little surprise that Bielsa is a huge influence on Barcelona manager Pep Guardiola.

Chelsea came to the Camp Nou ready for a siege and losing Terry only strengthened their resolve. No matter how deep Chelsea defended, no matter how many men they put behind the ball (Drogba seemed like he was playing defensive midfield at times), Guardiola didn’t deviate: Barca stuck to their poetic script. And they came up short.

Does Barca need to change the way they play? Of course not. But they might need to change the players. A striker (Fernando Llorente?), a winger, and some central defensive cover for Gerard Pique, Carlos Puyol, and Javier Mascherano. Some different faces, some new blood.

Sadly, it would seem that one of the new faces will be managing Barcelona from the technical area. After four tremendous seasons, Guardiola has stepped down. The intensity and attention to detail that the former Barca midfield general brings to the job of manager, the epic, globe-trotting journey he has led Barca on — winning three La Liga two titles and two Champions League trophies — was simply too hard to sustain. “The reason is simple, four years are long and they wear you down,” Guardiola said. “I think that sincerely that the next person will have things to bring that I can’t.” Well, he certainly won’t have suits that are as nice. That would be impossible.

When You Have the Killshot, Take It

I am still having a hard time believing that Bayern is hosting the Champions League final. At his previous clubs, Real manager Jose Mourinho has been notorious for his ruthless streak. In fact, if I have one sense memory of his time at Chelsea, it’s turning off matches as soon as the Blues went up a goal. Teams just didn’t come back against Chelsea. Same went for Mourinho’s Inter Milan. Given how they played in the first 15 minutes, it seemed like this Real team was playing by the same assassin’s creed. Two Ronaldo goals, Bernabeu crowd getting straight-up delirious, visions of La Liga/Champions League doubles dancing in their heads.

In that moment, it looked like Real could put four on Bayern before halftime. Maybe it was the moment, maybe they got carried away, maybe the Real players were wondering how many of them could get a pre-final dinner at Tantris. Who knows? They took their foot off the pedal long enough for Arjen Robben and Bayern to get back in the game.

After playing an emotional, possibly La Liga–winning El Clasico on Saturday, Real looked like they simply had nothing left in their competitive tanks. After playing out a frenetic first half, you could feel the life go out of the match as both sides tried to wait the other out. It was a critical mistake on the part of Real Madrid.

Bayern were just sharp enough, just lucky enough, just strong enough to get the match to penalties. And there are fewer sure things in sports than betting on anything even tangentially German-related in a penalty shootout. Ronaldo, Kaka, and Sergio Ramos had their penalties saved or directed them off target, and Bayern clinically dispatched the presumptive Spanish champs.

When Ramos sent his attempt into the night, high above Manuel Neuer’s goal, the television broadcast showed a shot of Mourinho making a classic, sarcastic/surprised smirk. Like he couldn’t believe this didn’t work out according to plan.

Pretty daft if you ask me. If anyone could extol the virtues of burying an opponent seven feet deep and building a jail on top of them, it’s him.