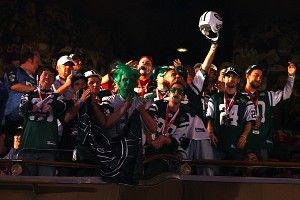 Before we ask whether the Chiefs were nuts to take Dontari Poe, can I share one NFL draft story from the Olden Times?

If you were really interested in the NFL draft around, say, 1993, here’s what you had to do. You had to wait for Mel Kiper Jr. to come on a local sports radio show. If that show aired during the hours you were in English class, you had to leave your bedroom stereo blaring and a tape winding while you were at school. Later, from this tape, you had to harvest Mel Kiper’s 800 number. Then you had to leave a message on an answering machine — in Mel’s office? Mel’s basement? — that included your mom’s credit card number. And then you had to sweat it out until a thick, blue draft report arrived in the mail.

I’ll spare you the story about walking 10 miles in the snow to meet Joel Buchsbaum. But let’s remember those innocent days as we walk into an 82,000-seat football stadium to watch this year’s NFL draft.

At MetLife Stadium, home of the Jets and Giants, they’re patting down everybody who showed up for the annual draft party. This brings up a sobering idea: The terrorists have finally discovered how football fans spend April. Inside the gates, Jets employees are giving away T-shirts. “Good luck tonight!” one employee tells me. “Thanks,” I say.

At this late date, I get no extra points for declaring the draft has become nearly indistinguishable from actual football. Last year, the networks claimed 42 million viewers for their draft coverage. But watching the draft in a football stadium nicely underlines the shrinking distance between two formerly separate entities. Following the crowd, I walk down a ramp and onto the playing field. Standing at the 50-yard line, with FieldTurf crunching under my sneakers, I look up. And there, on the JumboTron, is Rich Eisen. Rich Eisen is saying that the Vikings have traded their pick to Cleveland.

There’s some tension at MetLife. The Jets, who went 8-8 last season, threw open their doors and invited everybody who wanted to watch the draft. Illuminated signs directed the Jets people to one side of the stadium. Meanwhile, the Giants, who won the Super Bowl, invited only those fans who hold personal seat licenses. Giants fans used another entrance. Of course, there was nothing stopping an un-PSLed Giants fan from posing as a Jets loyalist and slipping in the other door. And in any case, after using discreet entrances, all of us wind up on the same field staring up at the Rich Eisen godhead.

I’m watching the NFL Network throw up live shots of draft parties from Mall of America Field and Sun Life Stadium — thousands of other people commemorating the night the same way — when I hear a voice. “Ingram or Upshaw?” says a New Jersey accent.

This is John Jay. John works at Target in Edgewater. He watches Jets games with his dad in Section 128. John is old enough to have made the hajj to the greatest venues in NFL draft history: the Marriott Marquis, that claustrophobic, low-ceilinged space that was like Boogie Nights filmed at a baseball card convention. John was at the Javits Center in 2005 for the 70th annual draft.

“Oh, yeah!” John says. “Jeff Lageman.” Lageman, a University of Virginia defensive end, was booed luxuriously by Jets fans when he was drafted 14th overall in 1989. This made Lageman an NFL draft immortal.

I remember Thomas. He was picked 15 spots in front of Emmitt Smith.

In a stadium of draftniks, John is a typical autodidact. “As soon as the season ends,” he says, “I look at all these kids.” Look at them how? Well, John has the Kiper guide. Now, of course, that is outmuscled by what’s online: YouTube highlights, 40 times, and an army of bloggers who have been taught (possibly by Mel Kiper) to write about outside linebackers’ “first step” and cornerbacks’ “fluid hips.” It’s almost compulsory that everyone, at least once in their life, should create a mock draft. If most of this learned info is useless — the Jets, for instance, select neither Ingram nor Upshaw but North Carolina defensive end Quinton Coples — then this is a draftnik’s lot. He will memorize everything, until next year, when he will memorize everything again.

With the Cardinals on the clock at no. 13, John searches his draft brain and correctly calls the pick: Notre Dame receiver Michael Floyd. “I should be in the war room!” he crows.

John, I want to tell him, we already are.

This week, one mock draft stood out. It stood out because it didn’t contain a 40 time or a bench press and it hardly contained any statistics.

Greg Cosell, a senior producer at NFL Films, produced a mock draft with … his eyes. “I am solely basing my player evaluations on what’s on the tape,” he wrote. “That’s what I do. I watch tape.”

Tape. It’s a tantalizing, mystical thing, like OPS once was in baseball writing. Cosell, who is the nephew of Howard, has been with NFL Films since 1979. In 1984, he became executive producer of NFL Matchup, the ESPN show that makes a fetish of using coach’s film — called “All-22,” because it shows a full view of the field — to break down plays. Beginning after the Super Bowl, Cosell watches this tape every day, all day, for about three months. He watches at least three full games per prospect.

For Cosell, tape contains enlightenment. Of Boston College linebacker Luke Kuechly: “I’m tired of hearing about Kuechly’s average athleticism. I watched game after game after game and he played fast with urgent reaction speed.” Kuechly went at no. 9 to the Panthers. Of Boise State running back Doug Martin: “There was a blue-collar, workingman element to his game that was more appealing and captivating with each tape I watched.” Martin went to the Bucs at 31.

A comparison with the stats gurus at Football Outsiders is instructive. Last month, Aaron Schatz set out to determine whether Robert Griffin III or Andrew Luck would have a better NFL career. Outsiders’ forecast considered, among other factors, each quarterback’s completion rate. Cosell discussed accuracy, too. But Cosell judged it by simply watching the quarterbacks rather than looking at their numbers. “I don’t really worry at all about statistics in college,” Cosell says. (Incidentally, both Cosell and Schatz think RG3 ranks higher than Luck.)

What’s really interesting about tape study is its exclusivity. Any of us with a few hundred bucks and DirecTV can record college football games. But coach’s film — the stuff Cosell uses, where you can actually see the quarterback’s progressions and the defensive secondary — is rare. This is how rare: When tape fiend Ron Jaworski wants to watch All-22 of NFL games, he has to go through NFL Films to do it.

During last year’s draft prep, Cosell got a tip about Denarius Moore, a wide receiver from Tennessee. He popped in the coach’s tape. On two plays early in Tennessee-LSU game, Moore ran right by Patrick Peterson — the LSU corner who went fifth overall last year — but the quarterback didn’t throw it to him.

“I’m not sure how many people got the opportunity to watch him run by Patrick Peterson,” Cosell says. “I did because I had the All-22.”

Two hours before the draft, I drive down New Jersey Route 35. Beyond a row of strip clubs is a sports bar called Park East. Park East is the kind of place where a middle-aged regular extracts a hug from his young waitress when he arrives and when he departs. (In the interest of full disclosure, it also has very decent-looking sushi.) The draft party has a headliner: Ahmad Bradshaw, the Giants running back.

Bradshaw arrives about an hour after he’s supposed to. There is warm applause. He is wearing dark glasses (which he declines to remove) and a watch that glitters with what appear to be diamonds. For $59.99, Bradshaw will autograph any item. For an additional $20, he will personalize it. For $75, he will smile widely while you stand next to him and then — through an intermediary — hand you a nice-looking photo. The line is enormous.

Two of the first draftniks in it are Frankie Iazzetta and his mom, Diane. Frankie — bespectacled, wearing Giants logo pants — is celebrating his 15th birthday.

“My husband died when he was 8,” Diane tells me. “He was a big Giants fan.” Now, Frankie is the Giants fan of the house, and Diane, in an effort to nurture that fandom, has bought him Ahmad Bradshaw’s autograph for $59.99.

“He’s pretty good at it, too!” Diane says. Just wait till he gets Greg Cosell’s All-22 film.

This is a very big sports night in New Jersey, with double NHL Game 7s. But Park East’s upper floor is filled with Giants balloons and fans — a lot of them, anyway — settling in for the draft. Between autographs, I slip over and talk to Ahmad Bradshaw. I want to know if players share the draft obsession of the masses. Will you watch it? I ask Bradshaw.

“A little bit,” Bradshaw says. “No, not really. I’ll hear about it later.”

I prepared a nice little wind-up here about the man who fell into the end zone being, somewhat ironically, a portrait of self-restraint. If we all Bradshaw-ed — that is, waited and refused to give in to our draft obsession — we wouldn’t waste countless hours. The athlete sees through hype, etc.

But then the Giants use their first-round pick on David Wilson, a running back from Virginia Tech who will compete with Ahmad Bradshaw.

You can almost picture Bradshaw getting the news at home. Jesus, he thinks, if I only had Mel Kiper’s 800 number.

After Game 7 Wins, (Brief) Relief for Rangers and Devils