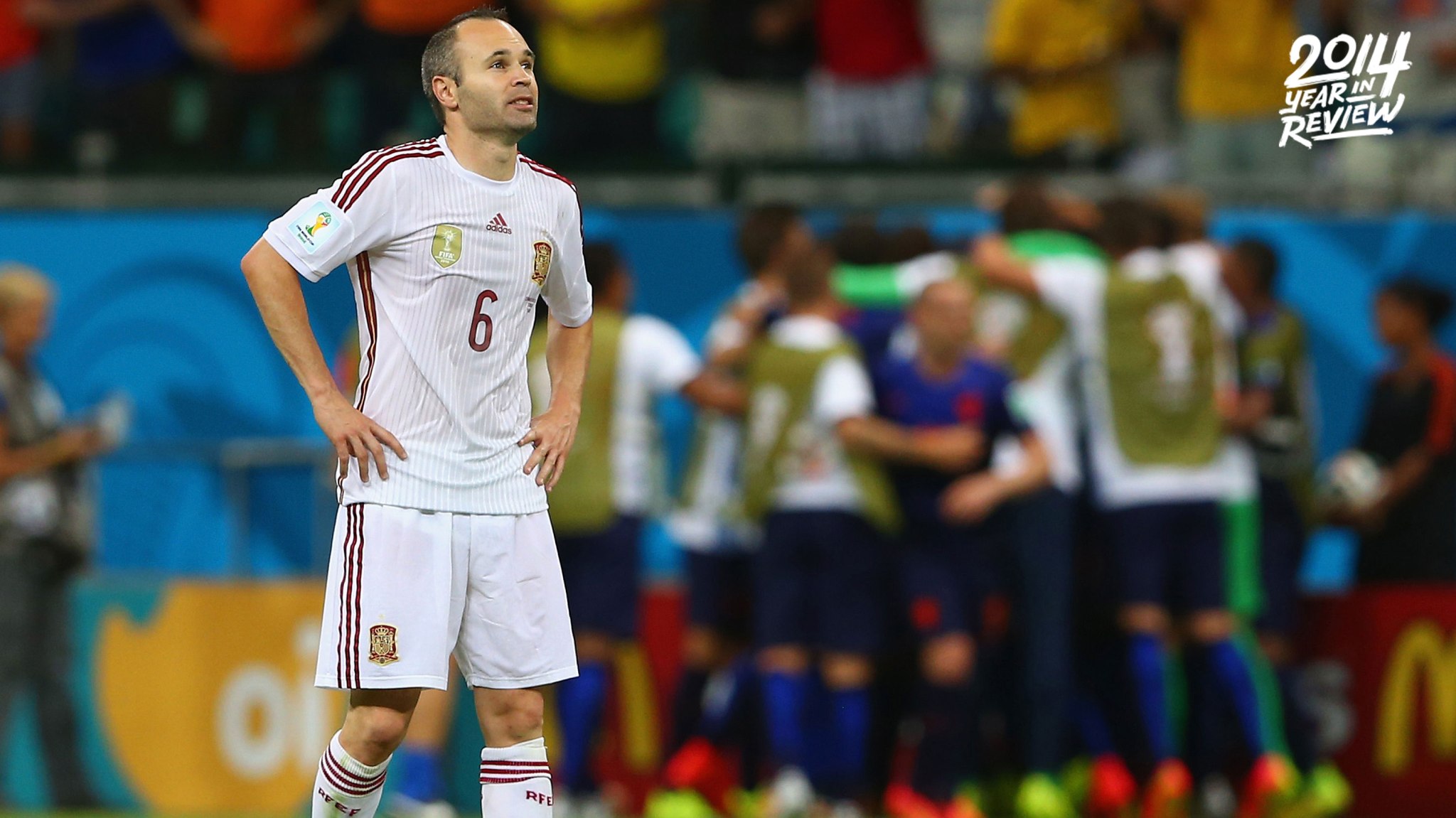 It briefly seemed like business as usual. David Silva finds some space and slips in a through ball that baffles a couple of layers of defense. Diego Costa runs onto the pass, fakes a shot, and gets cut down by some overeager defending. Xabi Alonso drives the resulting penalty into the bottom right corner. Spain sucks the life out of another game that could’ve been a thriller.

And then two cannonballs collided in midair and the world was forever altered.

I don’t ever remember being so shocked at the result of a single sporting event. While I’d always imagined Spain’s reign would finally end — international soccer hates consistency, and everything beautiful must die — I figured it’d come on one of those outlying “scoring goals is hard” trip-ups like against Switzerland in 2010 and the United States the year before. Instead, Louis van Gaal and Robin van Persie stormed the triangle-shaped castle, set it on fire, and awkwardly high-fived in the flaming glow as Arjen Robben trampled all over the ashes like an angry kid whose parents haven’t realized he’s grown too big for that sandbox. Ten days later, the defending World Cup champs and repeat European holders were on a plane home from Brazil, dispatched before the knockout rounds.

All of our critics’ best-of lists, the Year in Holy S#!t sports moments, and our series on What We Saw in 2014.
For whatever reason — high-intensity managerial ideologies that have short shelf lives, systems that leverage crucial responsibility on one player, God has a cruel sense of humor — soccer lends itself to hostile takeovers. Dynasties die suddenly and spectacularly: Hungary over England in ‘53, France over Brazil in ‘98, Senegal over France in 2002. But Spain had so tightly controlled every game they’d played in for more than half a decade that their dominance never seemed so finely balanced or at any risk of combustion. This was like watching your office desk suddenly turn into a snake pit.

While the general opinion of tiki-taka had begun to curdle,1 part of me felt sort of sad to see Spain go out like this. I’m not sure I — or we — can ever really appreciate how goddamn brilliant these teams were. They perfected passing and moving and, well, just being confident with the ball at your feet to the point where it became a reliably blunt defensive tactic. Mastery became monotony.

The circularity of the defeat — they lost to their 2010 World Cup final opponents, who were coached by Louis van Gaal, who coached at Barcelona, a club whose ethos informed La Roja and was formed in large part by Johan Cruyff, who was the face of the sport’s most beloved utopians, the Dutch teams of the ’70s — helped add to its resonance. As Michael Cox wrote over the summer: “Football today is, by and large, Spanish.”

And yet, this wouldn’t have happened the way it did without the Dutch — without Robben, Robin, Wesley, Louis, and those precocious, willing, man-marking kids — who reminded us that sustained excellence might be cool, but sometimes it’s more fun to just blow shit up.