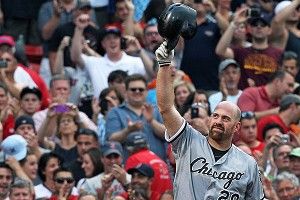 Two of my favorite Onion stories are “Kevin Youkilis Puts Sign-up Sheet for Threesome in Red Sox Dugout” and “Kevin Youkilis Keeps Everyone on Bus Awake With Another One of His Nasty Sex Stories.” Look at that face: looks like the crass degenerate we all knew in high school. But he’s not some stunted party animal. He is an intense, talented, and intelligent ballplayer who is also a giant pain in the ass for his teammates and coaches. As his career in Boston moved past the championship phase and into a new decade, the problems grew, and the negatives of Youkilis, the man, began to erode the positives of Youkilis, the player. It led to a late-June trade to the White Sox, and when Youkilis returned to Fenway in the gray-and-black for the first time on Monday night (Boston beat Chicago, 5-1), he soaked in the applause and played the role of conquering hero. But is that characterization accurate? More to the point, is it fair?

Let’s start in 2010, when Jacoby Ellsbury spent part of the year in Arizona rehabbing his broken ribs. Youkilis didn’t like it, because he was also hurt but still hanging around with the team. And if there’s one thing we know about Youkilis, he won’t keep quiet. Exhibit A is this excerpt from a July interview with the Boston Globe:

“I don’t know what’s going on with Jacoby,” he said. “I don’t think any of us really know.”

Was it strange for Ellsbury to be away from the team that long?

“Don’t go down that road,” Youkilis said. “One thing I can say is there’s a lot of guys here that are hurt and supporting the team. We wish Jacoby was here supporting us, too.”

Plenty of players feel the same way. Youkilis is one of the few with the courage to say it on the record.

“Courage” is one way to put it. “Disloyal” and “meddling” is another. In what has become a Youkilis trademark, he appeared to deflect the negative sentiment (“Don’t go down that road”) before, well … going down that road. He had an ax to grind, and he made sure the media knew about it. And a year later, as Ellsbury put together an MVP campaign and Youkilis continued to struggle with injuries, he led the charge to isolate Ellsbury in the locker room, contributing to the team’s epic collapse and Terry Francona’s resignation. There were also well-publicized accusations — from Josh Beckett, reportedly — that Youkilis was the snitch who went to the media with the fried chicken, beer, and golf stories. His response? “There were tons of things going around where guys had questions.” Not exactly a firm denial.

Then there’s the April incident with Bobby Valentine, when the then-new Red Sox manager publicly questioned Youkilis’s physical and emotional commitment to the team. First off, it’s worth saying that Valentine has behaved like we expected him to behave since taking over, and anyone who said his tenure with the Sox was doomed from the start appears to be clairvoyant. There’s no justification for Valentine’s calling out Youkilis, because his actions should have been tempered by Youkilis’s notoriously fragile ego. But — surprise, surprise — Youk wouldn’t let it go. His hyper-sensitivity resulted in a miserable relationship with Valentine, to the point that the manager said, “I don’t think he ever wanted to get over it.”

And what about that physical and emotional commitment? Was Valentine wrong? Why was Youkilis’s line with Boston a career-low .233/.315/.377? Why does it seem like he flipped a switch the minute he was traded to the White Sox, with whom he’s hitting .323/.416/.523 in 17 games? It could be that he happened to get fully healthy at the perfect moment, but it’s hard not to believe that he’s out to prove something with the White Sox, and that he was holding something back in Boston. He’s become one of the top five offensive forces in the major leagues over the past 10 games, and the timing is too perfect to be a coincidence.

He’s motivated, but in true Youkilis fashion, the motivation is pure ego. He wants to stick it to the Red Sox for mistreating him, even though he’s behaved like a guy who wants to be elsewhere for the past two seasons. (Or maybe more — remember the fight with Manny in ‘08, which was the first incident leading to his trade two months later?)

But he was a brilliant ballplayer for most of his Red Sox career, and last night, in his first trip back to Fenway, the fans rewarded him with a standing ovation. Youkilis, the vengeful icon, doffed his helmet to the crowd, and then Youkilis, the force of nature, went 3-4 with two doubles. And as the fans applauded, Bobby Valentine stood at the top of the dugout with his usual smirk, soaking in the hate-by-implication, perhaps wondering if he’d lost the city for good.

They love Youk in Chicago, too, but the White Sox will eventually learn the complexities of his character. Like a lot of intensely driven and talented athletes, the byproducts of his extreme personality provide a competing narrative with the gaudy statistics. In the later stages of his Boston tenure, his bitterness hurt the Red Sox as much as his bat helped, and he crossed that vague line where talent can no longer pay its own passage. It remains to be seen whether that failure was the result of a deteriorating relationship unique to the Red Sox, or something intrinsic that will poison the rest of his career. But the South Side faithful would be well advised to enjoy the honeymoon.