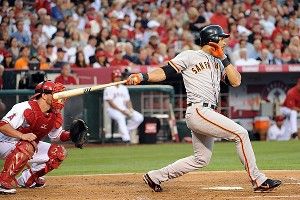 There’s a shared problem out west as the Giants and Angels meet in this week’s interleague series, and it has to do with juggernauts and shadows. Both teams are heading into the All-Star break with wild-card aspirations, and both are facing a miserable climb to take down the entrenched rivals at the top of their divisions — the Rangers and Dodgers.

On Monday night, Matt Cain pinballed through five innings in his first start since the perfect game last Wednesday, and the Giants managed a 5-3 win. The next two nights, with Wilson-Zito and Weaver-Vogelsong duels, promise to be just as interesting. But does either team have the tools to pull off a West Coast coup and unseat the ruling powers? Let’s run the numbers.

The Giants have a very good pitching staff that would easily be great if Tim Lincecum could reverse his 2012 fade. Ryan Vogelsong, Madison Bumgarner, and Matt Cain all boast sub-3 ERAs, and even Barry Zito is pitching competently. Even without Lincecum, this is the best 1-2-3 punch in the National League, outside of the Nationals. When you factor in every starter, though, they trail the Dodgers — who have five consistent starters, even with Nate Eovaldi shouldering the injured Ted Lilly’s load — by only a few hundredths of a run in the ERA department. The answer here is that the Giants definitely have the starting pitching to catch the Dodgers, but the signs aren’t great. Zito has struggled in his last two games, and the other shoe might be dropping on his surprising start. Meanwhile, Lincecum just keeps getting worse and worse, and the really bad news is that his fastball velocity is way down.

As for the Angels, they actually have better starting pitching than the Rangers. In fact, they boast the best starter ERA in the American League. The Rangers are no slouches, for sure, but with C.J. Wilson and Jered Weaver leading the way, the Angels have a very competent staff that typically gives them a chance to win every game.

Giants closer Santiago Casilla has been dominant in 2012, with 19 saves and a 1.32 ERA. In his last 10 appearances, he’s allowed just one run and six hits. Needless to say, he’s been a terrific replacement for Brian Wilson, anchoring a bullpen with the third-lowest ERA in the National League. Sergio Romo, Tony’s evil twin brother, has been spectacular all year pitching in the seventh and eighth innings, while Jeremy Affeldt and Shane Loux have been strong of late. The Dodgers are close behind in bullpen ERA, and have a better batting-average-against, but the edge belongs to the Giants.

Closer Ernesto Frieri has been like a godsend to the Angels since coming over from the Padres (for a great profile on Frieri, check here), notching seven saves and four holds while allowing 0 earned runs and just three hits — THREE HITS — in 19⅓ innings. He’s also struck out 35 of the 76 batters he’s faced as an Angel. Scott Downs has been spectacular as well, allowing just one earned run in 21⅔ innings. Together, they form an almost unbeatable combo in the eighth and ninth innings. The overall Angels bullpen ERA is middle-of-the-pack in the AL, but their top two arms are the envy of the league.

This is where it gets dicey for both clubs. The Giants are coming off a truly terrible offensive season in 2011, when their 570 runs scored were second in ineptitude only to the Seattle Mariners. Losing the wild-card race was a particularly bitter pill to swallow since their 578 runs allowed was the second-lowest total in baseball. The imbalance has been slightly corrected in 2012, and most offensive metrics have them in the mid-to-bottom part of the league, rather than in the gloomy cellar. Melky Cabrera, with his .364/.401/.535 line, is the surprise of the season so far, and the full-time return of Buster Posey and his powerful bat, along with the addition of Angel Pagan, has added a bit of pop to the formerly lusterless lineup. But this is still a very average offense, and they’ll continue to trail the Dodgers’ slightly superior attack.

In the AL West, the runs-scored totals tell the story. Rangers 360, Angels 269. Albert Pujols was expected to help erase this gap, which was just as bad last season, and there’s evidence that he might be finding his form, but a slow start almost allowed the Rangers to run away with the division. But the Angels lineup is not without its stars; as the Washington Post reported two days ago, rookie Mike Trout is putting up better numbers than even Bryce Harper, the media-magnet wunderkind. Mark Trumbo is one of the best power hitters in the league, with 16 home runs and 42 RBI, and Torii Hunter has a competent .271/.347/.448 line while playing an excellent right field.

We see almost the same profile with both teams: Very good starting pitching, excellent bullpens, and mediocre offenses. In terms of catching the Dodgers and Rangers, it’s not great news. The regular season is tailor-made for offensive powerhouses, and when you average 5.29 runs per game, as the Rangers do, you’ll lose very few games to bad teams. The Dodgers are less explosive, giving the Giants a better chance to win the division, but it’s still hard to imagine them making up many wins without power.

But in the playoffs, the narrative is reversed. If they survive the first 162 games, the Giants and Angels will suddenly look very dangerous, and their excellent pitching will become a trump card. The converse is also true. In the absence of weak arms, powerful offenses are less meaningful in the postseason — just ask the Yankees. You win divisions at the plate, but you win championships on the mound.