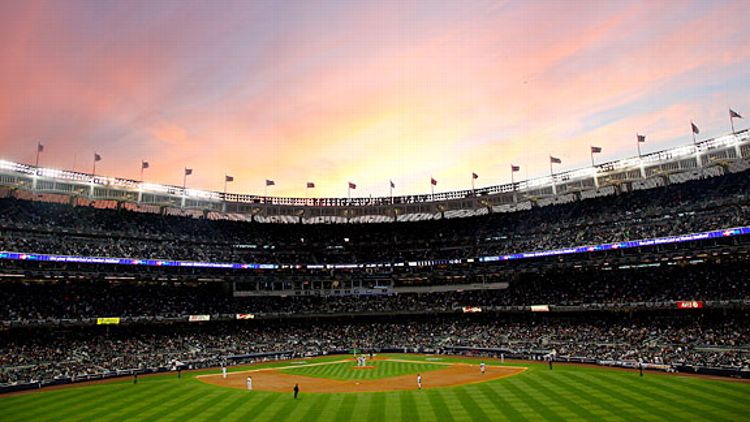 I visited New York City this past week and was able to squeeze in my three favorite experiences there: going to a game at Yankee Stadium, doing something weird by accident, and seeing a movie I can’t find back in North Carolina. (Actual culture is wasted on me.)

The Yankees game went well — a 5-2 win over the Milwaukee Brewers.

The accidental weirdness didn’t disappoint, either. On Thursday, my friend sent me this invitation by text message: “headed to the west village to watch girls protest something by riding around in short skirts.” I tried to restrict myself to a very fast walk to meet him.

It turned out a Dutch woman had been stopped by an NYPD officer for allegedly distracting drivers by biking in a short skirt, which sparked the protest ride. Coincidentally (or not), the woman was also a general manager at a bike company and very comfortable speaking in front of a crowd. The whole thing reeked of a calculated marketing stunt, albeit with a wonderful poster. It attracted about 50 people, but since only a few of the female protesters actually wore short skirts and some guys showed up in dresses, the actual message must have been totally confusing for an outside observer. Meanwhile, the bikers had to focus on avoiding a massive pile-up amid a lot of angry drivers. My weirdness quota was filled.

The movie experience, on the other hand, was a total failure. I was supposed to see a comedy, but I mixed up my show times and ended up with just one choice at the theater: a Romanian film called Aurora. Some might think that short description alone should have raised a red flag, but I chose to buy a ticket based on two factors:

1. The poster made it look like a cool sepia-toned noirish crime thriller.

But I forgot one of my main moviegoing rules: If a movie comes from a country without a long film tradition, never, ever see it unless a trusted source has given the stamp of approval. Otherwise, there’s a real danger that the final product will be self-indulgent, full of aimless “symbols,” and achingly dull.

And good god, did Aurora fit the bill. It was three hours long, though I lasted just 50 minutes. In that time, there were fewer than 100 words of dialogue. The lead character (the director cast himself, honoring a long-standing tradition of narcissistic snooze-fests) spent the first half hour working at a factory and hiding behind trucks in a decaying urban landscape — for a visual equivalent, picture an overflowing trash can at a filthy bus station — before examining his testicles in the shower for a full five minutes (how artistic! Male nudity!) and then suffering a meaningless visit from his parents. After that, I think he sat in a car and smoked. That almost took us to the hour mark.

Fuming in my seat, I passed a breaking point. Even if the rest of the movie was a breathtaking work of genius, it could never atone for the horrible beginning. I spent a moment regretting the $13 I wasted on a ticket, gave a few loud sighs to take the temperature of the room, and stalked out. I’ve still barely recovered from that anger, which is why I’m ranting about a movie most Americans will never see.

Here’s my real problem: With foreign films of that ilk, you can’t even rely on the critics. When I checked later, five out of eight reviewers gave “Aurora” a ripe tomato. Here’s what they had to say:

“An endurance test” — The House Next Door

Sounds awful, right? And those were the positive reviews! The negative ones rightly blasted the director, Cristi Puiu. But why do some critics seem to feel this odd compulsion to make excuses for bad foreign films? Did they actually like it? At the risk of mind reading, I’d say no, since they all called it boring in roundabout ways. (Review translator: “So dull I wanted to murder the director, but not so dull that I want to sacrifice my sophisticated posturing.”)

Instead of being honest, they trot out a litany of excuses and write them in academic gibberish: “Less a psychological case study than a philosophical treatise” and “Mr. Puiu thwarts narrative expectations … including psychological explanation for what happens” and “visually suggests the suffocating structures of … life” and “the flatness is part of the point.”

Throw in a comparison to a legitimately great foreign film of the past (L’Avventura, in the Village Voice’s case), and presto! A critic has made chicken salad out of chicken scratch. Which, sadly, makes it even harder for the truly great foreign films to ever prosper in America.

I tried sending Dargis a bill for my ticket, but she just wrote back, calling the invoice a “compelling, subversive work of postmodern literary malaise.”

On to the sports!