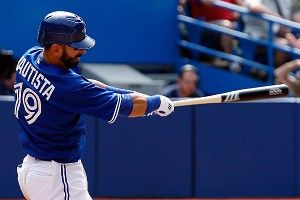 Bautista now has 14 home runs in June, which ties the American League record from the past 20 years (thanks, ESPN Stats & Information!). The all-time AL record is held by a fellow named Rudy York, who hit 18 with the Detroit Tigers in August 1937. He was probably juicing. But Bautista is theoretically in range. Four home runs over a weekend series? Why not? Except, wait … June has only 30 days! Injustice! Why, June, why?! That means Sunday’s game won’t count. But if he hits his 18th home run on July 1, I’m petitioning Bud Selig to add an asterisk to York’s record, Ford Frick style.

Adam Warren has spent five years in the Yankees minor league organization, and has progressively gotten worse each season. This year, he’s 5-5 with a 3.86 ERA and a 4.23 FIP at Triple-A Scranton, striking out fewer batters than ever before and allowing more home runs. And this is the guy who was supposed to hold the fort after Sabathia and Pettitte went down with injuries this week? That sound you hear is me gulping, over and over. (Additional fun fact: Robinson Cano is 10-26 with four home runs in the last seven games.)

There’s a heavyset guy on Highway 15-501, which runs between Durham and Chapel Hill, who panhandles on the median with a sign that reads, “to ugly to prostitute, to stoopid to steal.” I like it, because both points are demonstrated. There’s a bit of humor and spirit in the midst of a fairly hopeless situation, which is essentially how I feel about Baltimore-Cleveland.

The Kansas City shortstop has gone 12-20 in the last six games, with a bunch of singles, a few doubles, and a home run. Is this a reason to actually watch Royals-Twins, the worst series of the weekend? No. But now you know about Escobar.

I’m turning no. 6 over to “Terrence,” the Grantland robot who is currently training to take our jobs, but who has not yet learned to write in lowercase letters: “THE PITTSBURGH PIRATES MATCH UP AGAINST THE ST. LOUIS CARDINALS IN A BATTLE OF TWO TEAMS WHO ARE LESS THAN TWO GAMES BEHIND THE REDS IN THE NATIONAL LEAGUE CENTRAL.”

Sounds like a sweet reality show. I’m not sure what it would be about, but we can figure that out later. Any TV person worth his salt will tell you the title is the most important thing. The deal here is that the Rangers have won three straight, and the Angels four straight. Texas has a 4½ game lead in the AL West, but L.A. has crept into the wild-card spot ahead of the fading Orioles. Hey, did you know that Yu Darvish has the most effective slider in baseball? He pitches Sunday against Oakland’s Travis Blackley. Or that Jered Weaver has the most effective fastball in baseball? Or that Dan Haren throws the best split-finger fastball? Lucky for Toronto, those last two don’t pitch this weekend.

Let’s be honest: R.A. Dickey found himself in a bit of a panic last Sunday night against the Yankees. That was his big moment, but he wasn’t quite up to the task. Put it this way: I’ll be very interested to see if he can get his mojo back tonight against Aaron Harang. The Dodgers, meanwhile, are in a good deal of trouble. They lost to the Mets last night, and dropped three straight to the Giants before that without scoring a single run. The former darlings of the National League now trail San Francisco by a game, and are within striking distance for wild-card hopefuls like the Mets. And who do they get, now that the slide has begun? Dickey and Johan Santana, two of the best pitchers in the league.

Last week, I was all excited to watch Sale-Greinke on Friday night. My girlfriend was headed out of town, so I dropped her off at the airport at 6 p.m., fought through rush hour traffic (there was a crash, and nothing makes me feel wore as a human than the fact that I get angry at the people who crash for making me sit in traffic interminably, even though they may be, in fact, dead), and got home in time to crack a cold one and settle in for a pitcher’s duel. Then the phone calls started coming in. Storms along the East Coast were delaying flights out of Raleigh, and my girlfriend’s trip to New York was in doubt. In my heart, I knew what would happen, and sure enough, around 8 p.m., I got the call to pick her up. Not only that, but I had to bring her back at 4 a.m. Saturday.

Needless to say, I was irrationally annoyed with my girlfriend, and she was irrationally annoyed at the weather, so nothing was pleasant. We got home just in time to see Milwaukee get the winning run in the 10th after 18 scoreless innings. Amazing pitchers’ duel, and I missed it. Point is, we have another awesome showdown tonight between Price and Verlander (best curve in baseball), and I will miss it again because Wes Anderson’s Moonrise Kingdom has finally migrated to this part of the country and I will be there unless someone kills me. Friday baseball just isn’t working out.

Anytime Stephen Strasburg and Gio Gonzalez are both pitching over the weekend, as they are on Saturday and Sunday, the Nationals series will make the top five. That’s just a given. They remain two of the top five pitchers in baseball by WAR and FIP, and two of the top three by strikeout rate. Add in the drama of the NL East race, where the Braves trail by 3½ games and you’ve got what the kids call a “real humdinger.” Atlanta is on the short end of the pitching matchup in all three games, and by all rights they should lose this series. But if they can steal two wins at home, it might plant the first seeds of doubt that lead to a divisional title. Trivia: Who has two thumbs and will miss these games due to the motherf—ing MLB blackout? EVERY PERSON WITH TWO THUMBS IN THE STATE OF NORTH CAROLINA.

Let me just put it bluntly: I’m thrilled that the team I cheer for plays in the American League, because the Giants are making the World Series. It’s happening, and we should all get used to it. An incredible starting staff, a terrific bullpen, and an increasingly competent offense have them in the lead in the NL West. What’s more, they haven’t allowed a run in four games, and all four were against teams in first place at the time! The shutout record in the last 30 years (thanks again, ESPN Stats!) belongs to the Orioles, who had five straight in 1995. They can tie that record tonight with Matt Cain (who forces teammates to call him Dr. Perfect since throwing his perfect game), and maybe break it with Barry Zito and Ryan Vogelsong over the weekend. Looks like this guy just found a reason to not go outside.

Crosby's New Contract: The Good, The Bad, and the Sidney