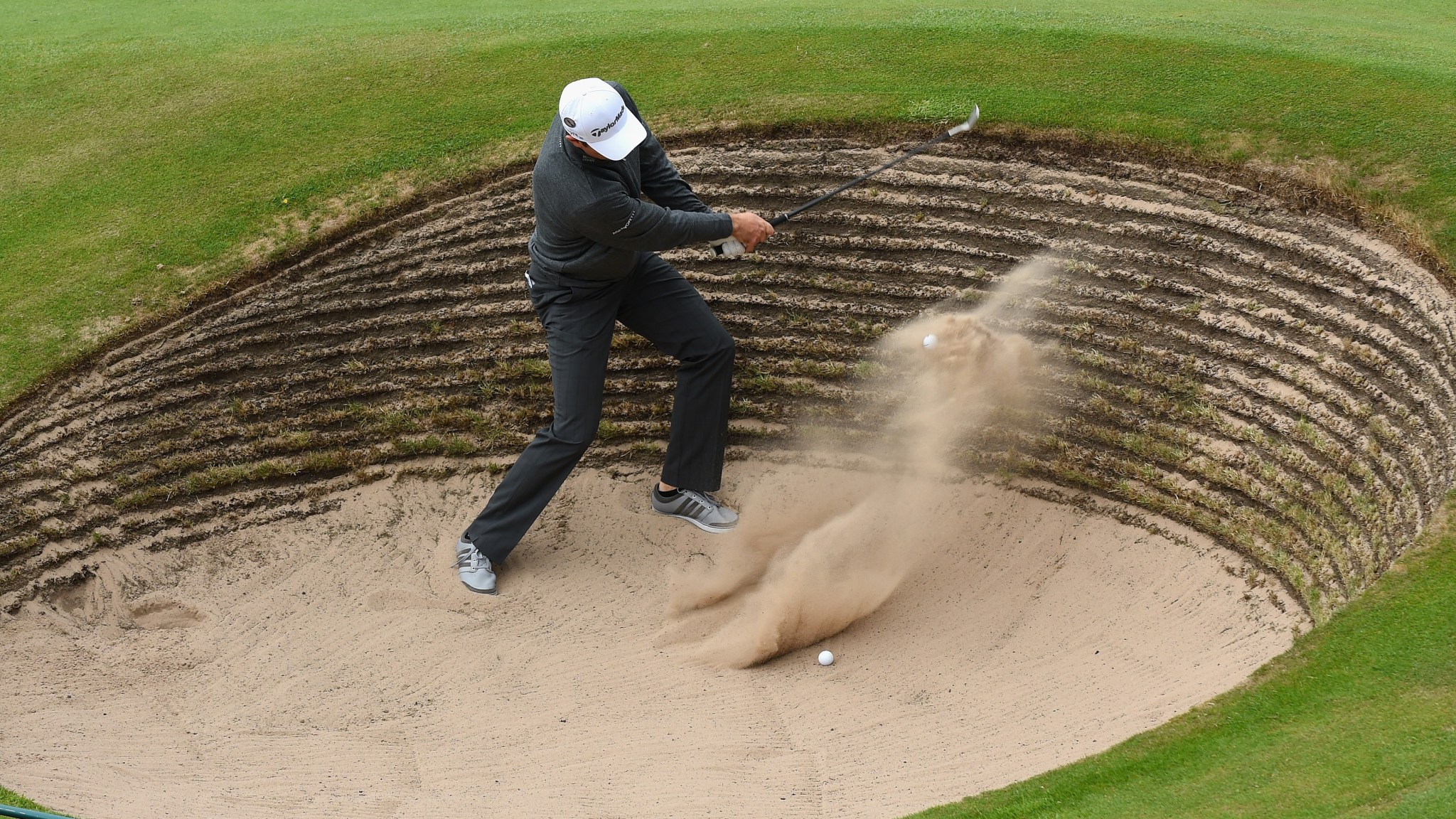 (You’re better than this. Just type anything else. It’s so easy.)

GOOD DAY FROM HOYLAKE IN MERRY OLDE ENGLAND (son of a … ), where the British Open — sorry, The Open Championship — is about to be contested at a lovely linksland course called the Royal Liverpool Golf Club. It’s a classic Open track, full of fairway swales and pot bunkers and fescue rough twisting along the River Dee, a body that forms some of the border between England and Wales before flowing north into the Irish Sea. Dark Welsh hills overlook the back nine from across the river, and if you squint your eyes hard on a clear day, you can gaze due west and almost convince yourself that you see Dublin.

Let’s get right to the power rankings, from 20 to 1, touching on English quirks, the peculiarities of links golf, Chronic Tiger Obsession, and, of course, the players who will rule Britannia.

I guess I knew, in my head, that some houses in England (the nice ones) had names, but it always seemed like the kind of detail you’d see in nostalgic films like The Remains of the Day. It was a period quirk, not something real. Then I took a walk along Meols Drive, which runs just outside the course in Hoylake, and yep! The houses all had names. Most of them were etched into the stone pillars out front, and I thought it would be poor journalism if I didn’t write them all down. Here they are, English to the core:

And man, what nice houses. They’re like brick-and-stone cottages that have bloomed into mansion size, with flower gardens and crawling vines and turrets/bay windows/dormers/every other quaint architectural quirk they could fit in. Compared to American golf course communities, they do a terrific job disguising their obscene wealth.

19. Giving Back a Trophy

Phil Mickelson had to return the Claret Jug this week, and I think that has to be the worst feeling ever. Shouldn’t they just give him a trophy he can keep? If I ever won the Open (seems unlikely at this point), I would almost definitely pretend I lost the trophy in the ensuing year. Then I’d get scorned by the powers-that-be because the Claret Jug is 142 years old, but you know what? Too bad. After I got away with it, I’d have all the other names removed so it was just me and Old Tom Morris, and then I’d start a Wilson from Cast Away–type relationship where I had long conversations with Old Tom the Trophy as my loved ones deserted me.

God I love pot bunkers. Just look at them! The glory! I can’t wait to see my first live-and-in-person golfer think he can hit toward the green, and get rejected by the wall. If you’re following on TV, I’ll be the one guy cheering for the pot bunkers while everyone else is groaning.

Unlike the U.S. Open course at Pinehurst, which was virtually guaranteed to be a huge headache for the golfers regardless of what the weather did, the elements here in England will have an enormous determining factor on how this tournament plays out. The last time the Open was in Hoylake, in 2006, Tiger Woods shot 18-under, and seven players reached at least 10-under. From what most of them are saying, the greens are actually softer this time around, meaning we could see some absurdly low scores if Mother Nature fails to come to the rescue. This would be good news for the Americans, who can bomb away without fear. If the elements do arrive, though, the golf will immediately become a stressful endurance test. It should go without saying that I’m rooting for the wind and rain.

Before taking a bus from London to Liverpool on Monday night, I didn’t realize how prevalent this pub-naming format truly is. The format is simple — take two completely unrelated nouns with no relation to drinking or pub culture in general, separate them with an ampersand, and lead with “The.” Between attempts at sleep on the bus, I caught pubs with names like The Bell and Compass and The Swan & Castle. Here in Liverpool, there’s a chain-type bar with upscale pretensions called The Slug and Lettuce. When I retire and start a pub over here, I’m going with The Cake & Murder.

Yep, seriously. WatchESPN is offering a broadcast that will follow Tiger and Tiger alone, with dedicated announcers and everything. I wish they would continue following him Saturday and Sunday even when he misses the cut: in his hotel, on the plane, back home. Because believe me, he’s still very rusty, his health is questionable, and he’s not making the cut.

It may seem redundant to say that great putting could win this tournament, since that’s true every week, but with a relatively easy track and greens that are almost unbelievably flat for an Open Championship, this tournament could easily become what Martin Kaymer refers to derisively as “a putting contest.” Royal Liverpool has tried to toughen things up a bit, building a a few swales around the greens, creating “broken ground” in certain patches of rough, and adding a bit of length here and there, but the changes are more cosmetic than punitive. The winner will likely need to score, and score, and score, and the guys who can sink the straight putts, from eight to 20 feet, are at a huge advantage.

AS TALL AS A MAN. The USGA is all about uniform rough heights for the U.S. Open, but the Royal & Ancient? Nahhhh. Grow, sweet rough, they say. Grow.

Kaymer, he of the Players Championship and U.S. Open titles, is always a fun, interesting interview. He was asked Tuesday to describe the German character (he’s riding pretty high on his country after the World Cup, as you’d imagine). He mentioned discipline and respect, but when pressed, he got more specific:

Well, I mean, we all know that we are very much on time always. It’s a very good quality of work. When you ask us — I just talk about the majority, now. Obviously we have a few that are lazy, like any other country. We all have that. But when you tell us to do something, we get it done, but we not only get it done, we get it done to last for a long time. If you build a house in Germany, it lasts 1,800 years. It’s not going to fly away when there’s a storm. It’s proper, like the foundations, everything is good quality. You see the cars that we build. It’s just — I’m making an advertisement for my country, but it’s just the quality of work. It’s permanent. It lasts.

Inspiring, on one hand, but hey, man, our houses are pretty good too. And we kick your ass in diabetes, bro.

11. Hey Everyone, Seriously, Tiger’s Not Going to Win

Guys? Hello? Why does everyone just keep chanting “Ti-ger” in that weird drone? Why are you all dressed in red and black Nike gear? Why are you— [muffled noises as I’m chloroformed]

On to the players who can hoist the jug!

He just won his first PGA Tour tournament at the John Deere Classic in Illinois, which earned him a berth at The Open. Popular wisdom says he’s going to be wiped out from both the title and the travel and won’t have the juice to compete this week, but I want to ride the hot hand. Plus, his highest round in Illinois was a 68 and his total score came in at 22-under, so if this becomes a horse race, he’s proven he can keep up.

I’m putting my two “obscure Euro” picks together. Both have played extremely well of late, both are in their home continent (in Gallacher’s case, home island), and both are on my fantasy team.

He hasn’t figured out how to pull it together and win on Sundays yet (either in majors or non-majors, aside from a win in Illinois last year), but he’s been there, and at age 20 that’s pretty awesome. Don’t count out the guy who played in the final Sunday pairing at the Masters and the Players Championship, even if his performance declined in his second try.

He’s gotten into a nasty habit of shooting excellent opening rounds followed by truly terrible second rounds. See, most recently, a 64-78 beginning at the Scottish Open, 63-78 at the Memorial, and 71-77 at the Masters. If he can survive Friday, though, we know he’s capable of shooting really, really low.

Time to put my money where my mouth is — Every is an incredible putter who co-leads the PGA Tour in “putts made distance” (longer is better) and comes in third in strokes gained, a complete putting measurement that’s as close as golf comes to sabermetrics. Every has very little major experience, and his performance this season has been erratic — either very good, or cut — but if he catches fire, he can go really, really low.

With bad weather, forget it — his game isn’t adaptable. With good weather, he could absolutely annihilate the four par-5s, and firm fairways mean his drives will roll for miles, provided he hits them straight. He may be a one-trick pony, but it’s a hell of a trick.

I don’t know what else will happen in Hoylake this week, but Scott finishing in the top 10? That’s practically a given for the world’s no. 1 player.

I know, I’m cheating again. But Kuchar and Johnson have very similar profiles: excellent course management, precision with the irons, occasionally hot with the putter. Johnson finally found his form last week with a second-place finish at the John Deere, and Kuchar has been excellent all year. I expect both to contend, though Kuchar still has to prove he can handle the Sunday pressure at a major.

I had him second in the U.S. Open power rankings as well, and I wouldn’t be at all surprised to see a similar result. He’s tough, he’s complete, he seems to believe in his own destiny, and his game really has no weakness.

Two victories in his last two tournaments, at Congressional and last week’s Scottish Open, mean you have to think of Rose as the favorite to break a 21-year English drought at the national major. Even better, those two tournaments required different kinds of golf: grinding at Congressional, and dropping birdie after birdie to eclipse a low-scoring field in Aberdeen. Unlike the course itself, he may be weatherproof.

The ‘Would You Trade Wiggins for Love?’ Shootaround