The Tribe Are Winning Over the Doubters 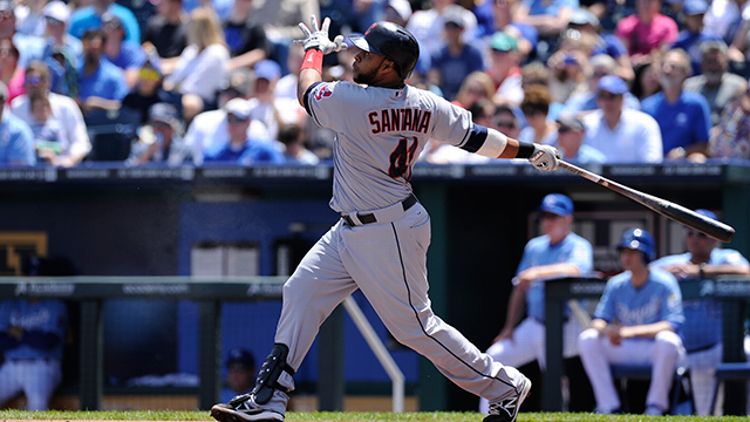 Baseball players’ careers rarely show up as perfect bell curves. You might see a player break in with a big rookie season, only to stagnate or regress over the next few years. Then just when you’re ready to write off that player’s chances for stardom, the breakout comes.

This is the Carlos Santana story. This season it might also be the story of the Cleveland Indians, one of the hottest teams in baseball and one of the biggest surprises of the early season, hot on the heels of the powerhouse Tigers.

Santana broke into the majors mashing, hitting .260/.401/.467 in 46 games and looking like an immediate star, a worthy successor to Victor Martinez as the weak-gloved catcher who more than made up for his lack of defense with a huge bat. In Santana’s sophomore season of 2011, his power-hitting ability translating well over a full season, as he bashed 27 home runs; he also hit just .239, walked less often, and struck out more often. Last year, he walked more often and struck out less often, but his power dipped, and his overall numbers suffered.

Everything is clicking in 2013. We might need a little more time to see how much of this is real, but with each passing day, Santana’s numbers start to look more legitimate. For starters, his numbers on pitches in the strike zone are astronomical:

He has been one of the best power hitters in the league, ranking among the league leaders in Isolated Power and hiking his home run rate to 6.1 percent (up from a homer in 3.6 percent of his at-bats last year). It’s easy to dismiss his .370 batting average on balls in play as a fluke, until you see that he is hitting more line drives this year, without a single infield popout all season. All told, Santana is hitting .325/.438/.605, making him the third-most productive hitter in the game (behind Miguel Cabrera and Carlos Gomez) on a park- and league-adjusted basis.

Any time you make predictions in baseball, there is a range of possibilities that could play out depending on how well things go for a certain player or team. Santana is one of several players performing at or near best-case scenario levels right now for Cleveland.

Justin Masterson has led a starting rotation that has been not horrible — damning with faint praise until you remember how atrocious the team’s starters were last year. The 6-foot-6 right-hander throws from a nearly sidearm angle, making him murder on right-handed hitters. But Masterson has always been limited by an inability to get lefties out. Until this year, that is. Lefties are hitting just .231 against him this year, with one homer against 30 strikeouts; in 2012 they hit .288 with 13 homers and 72 strikeouts against him. He has also fared better against right-handed hitters, yielding a .195 batting average against them, versus .229 last year. Meanwhile, he’s allowing fewer homers than at any other point in his career, just 0.43 per nine innings. The kicker has been Masterson’s performance with runners on base:

Add it all up and you get career bests in ERA (3.14) and FIP (3.11). As with Santana, some signs point to regression ahead, while others suggest a potentially legitimate breakout. Masterson’s 5.8 percent home run–per–fly ball rate would be his lowest ever, well below his career 9.6 percent rate. He sports a .281 BABIP, 22 points below his career average but only about 10 points below league average, and thus within the normal range. The key has been more frequent use of his slider: He is now throwing that pitch about 28 percent of the time, and it has been the most valuable slider thrown by anyone this year, and a much needed neutralizer against lefty hitters.

There’s more. Scott Kazmir’s showing signs of improvement, throwing harder and more effectively than he has in years, after nearly washing out of the big leagues for good following a string of injuries and other setbacks. Ubaldo Jimenez has fanned 20 hitters and allowed just three runs over his past three starts, thanks to a mechanical adjustment the Indians hope could lead to strong results following a terrible 2012 and a rough start to this season. Mark Reynolds, signed to a cheap one-year, $6 million deal, is hitting .272/.365/.584 and is tied for the league lead with 11 homers. Ryan Raburn, one of several veterans acquired by the Tribe to add depth they sorely lacked last year, is hitting .313/.368/.538.

You can do this on a team level too. The Indians have been the most productive team in baseball with runners in scoring position and two outs, hitting an obscene .306/.397/.525 in those situations. Sounds like a fluke, right? Then you see the Indians leading the majors in overall offense, hitting 17 better than average on a park- and league-adjusted basis thanks to broad-based contributions from Santana, Reynolds, big offseason pickups Michael Bourn and Nick Swisher, and you wonder. Then you see the Cleveland bullpen’s numbers with runners in scoring position, and you wonder some more:

All of which leaves us with even more questions about the Indians and the team’s chances of finally making good on years of high expectations. In 2001, Cleveland won its sixth AL Central title in seven years. After that season, GM John Hart left to go run the Texas Rangers, elevating assistant GM Mark Shapiro to the big chair. In the 12 years since, the Indians have developed a reputation as one of the savviest organizations in the game. They’ve put analytically inclined people like Shapiro and his successor, Chris Antonetti, in positions of power, assembled an analytics team that rivals any other in both size and smarts, and built proprietary software to track everything from scouting and player development tasks to advanced metrics among major league players. Smart-aleck analysts (myself included) have picked them multiple times over the past years to rise up and win their division again.

We’re still waiting. Other than a bizarre three-year stretch from 2005 to 2007 in which they won 93 games, then 78, then 96 and the AL Central crown, Cleveland has been consistently dull to terrible for the past 12 seasons, sitting on five years and counting since they finished above .500. You could get excited about this year’s 21-17 start, until you remember the recent past. Two years ago, the Tribe sat at 25-13 after 38 games, 4½ games up in the AL Central race and coming off a 19-1 demolition of the Royals. They built their division to seven games by May 23, then completely collapsed, going 50-67 the rest of the way. Last year, the Indians owned a 22-16 record through 38 games, with a four-game lead in their division. That proved to be the high point of the season, with Cleveland going on to win just 46 of their next 124 games, finishing the year 20 games out of first.

Teams change personnel every year, and the Indians have executed one of the most drastic makeovers in the game, turning over 48 percent of the 25-man roster from the end of last year, with upgrades throughout the lineup and a rebuilt outfield that has helped trigger a big improvement in the team’s defense, one which helps explain some of this year’s improvement in run prevention.

But Indians fans have adopted a wait-and-see approach, probably for good reason. Sometimes 90th-percentile outcomes last, and you get big breakouts from players and an entire team that persist all year long. With this team, those unlikely highs have repeatedly been followed by more predictable lows. Whether you’re a stathead or a fan jilted one too many times by Indians flameouts, you’re probably going to need a little more convincing.

Thanks to ESPN Stats & Info for their research assistance with this article.