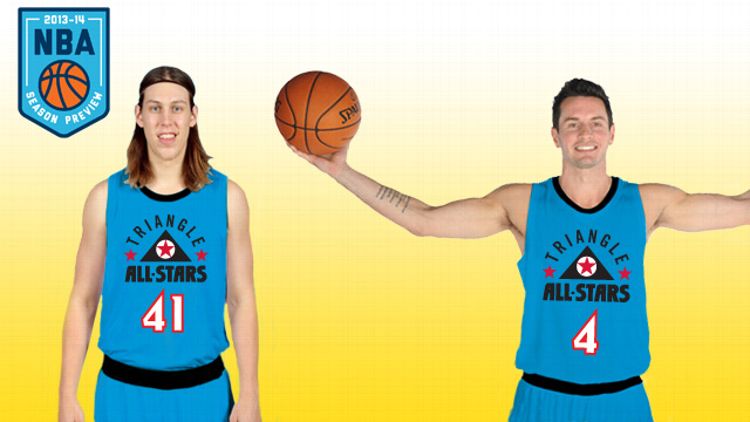 Compiling the Triangle NBA All-Stars offers a way for us to celebrate the players we love way too much. You can see the other entries in the series here. Check out the latest additions, J.J. Redick and Andrea Bargnani, below.

Why We Love Him: The short answer is sort of self-serving. When Grantland did its Most Hated College Basketball Players bracket, Redick, easily one of the most loathed Duke players ever (and that’s saying something), not only graciously agreed to talk about the subject with us, but proved himself to be an incredibly interesting interview. Speaking with Robert Mays, Redick was funny and candid about his Duke days. When Mays asked him about all the grief he took from opposing fans, Redick was honest: “I probably deserved it … I was sort of a prick.”

Ever since that piece ran, I’ve always kind of liked Redick. And besides, every team needs a villain, and for the Triangle All-Stars, we needed one who was self-aware.

But you know what? I don’t even know if J.J. Redick can really be considered a villain anymore. Sure, you would watch those post-Dwight Magic teams and there would be a chemical reaction in your brain that translated “Redick” to “dickhead” for some reason. But a funny thing happened sometime around the trade deadline last season, when Redick went on the block: Fans of every other NBA team looked up and said, “I’ll have some of that.”

All of a sudden one of the most loathed players in recent memory become one of the most coveted. Redick was the player I most often plugged into the ESPN Trade Machine, looking for ways to get him to the Grizzlies or the Celtics or the Spurs or the Bulls. In a way, Redick going to the Bucks was one of the biggest letdowns of the deadline. I really wanted him to play on a contender.

That’s all been corrected now that Redick is in Lob City. It’s perfect: We’ve taken one of the most reviled basketball players and put him on the coolest NBA team, which also has the best point guard. People will finally have a chance to (a) watch Redick (the Clippers are going to be must-see (TV), and (b) cheer for him.

Come on, guys, if Demon Deacon Chris Paul — who once got in a fight with Redick at basketball camp when they were kids — can come around on J.J., so can you.

Anecdote That Only Makes Us Love Him More: I find J.J. Redick, music fan, to be a fascinating character. He is an avowed alternative and indie rock listener, getting former Magic teammate Brandon Bass into Coldplay and Kings of Leon, and he has shouted out bands like Silversun Pickups and Divine Fits in interviews. But his wife doesn’t exactly share his tastes. Last winter, before he got traded to the Bucks, he took her to a Justin Bieber concert. “I have a general rule that if I have an off-day during the season that I owe it to her to do what she wants unless it’s harmful to my well-being. Her and her friends wanted to go.” Taking one for the team. It’s the Duke way.

GIF or Video Evidence of His Supremacy: TAKE ’EM TO THAT GHETTO UNIVERSITY, J.J.

IS THAT J.J. REDICK THROWING HIMSELF ALLEY-OOPS BECAUSE NO ONE WILL HANG OUT WITH HIM WHILE ANOTHER GUY WHISPERS “YES” IN SUPER CREEP-STYLE FASHION?! YES!

Final Words/2013-14 Prediction: J.J. Redick leads the Clippers to the Western Conference championship, opens an upscale watch retailer on Melrose Boulevard, gets mercury poisoning from all the sushi he eats, remakes Money Talks with Chris Paul, and becomes mayor of Los Angeles.

Why We Love Him: NEON JESUS.

What’s not to love? He looks like either Mitch Kramer from Dazed and Confused or a long lost Hanson brother. He is Canadian. His fellow rookies voted him the funniest rookie in this year’s draft class. He is white, which means Tommy Heinsohn will compare him to Dirk Nowitzki and Kevin McHale at least 10 times before next April. And he’s going to get endless looks on the post-Ubuntu Celtics this season — long hair, don’t care, will shoot from anywhere. The light is always green for Neon Jesus on the 2013 Celtics.

Why Some People Don’t: Imagine your favorite team going from Kevin Garnett to Kelly Olynyk. I’m not saying Boston will never love Kelly Olynyk, but it may take time.

For the rest of us, there is no excuse for ambivalence.

GIF or Video Evidence of His Supremacy: KILLA KELLY OLYNYK.

(That’s a Kelly Olynyk summer league highlight reel set to a Cam’ron instrumental, as we requested a month ago. Thank you, @OakleyAndAllen. The Internet is amazing.)

Anecdote That Only Makes Us Love Him More: Where did the Neon Jesus nickname come from? Grantland intern Danny Chau. As he explains, “I mean, there really is no explanation. The nickname makes absolutely no sense without context. It was just my heart’s reaction to the greatest rookie photo of all time. It’s no SANDERS! or Prof. Miller, but if I could get this nickname to catch on, I think I could die happy.”

Don’t we all want Danny Chau to die happy?

See also: King of the Canobie Lake Water Park. And: We all need this poster.

Final Word/2013-14 Prediction: On the one hand, this NESN article notes: “Olynyk does not look like a future superstar.” On the other hand: “If Olynyk keeps playing like he has been, it will be tough to keep him off the court.” And: “He does not fall into the stereotype of a pretty-boy big man who would rather fire away 20-footers than get his hands dirty. Even if his defense lacks polish, it does not lack for effort.”

Win or lose, Jesus will get his hands dirty.

You say people loved Pierce and Garnett because of their heart? Well, to paraphrase Rod Tidwell, Kelly Olynyk is ALL heart, motherfucker.

And here’s the thing about Killa Kelly, the New King of Boston — whatever happens with Olynyk will be fun to watch all season. If he fails, it will be fun to watch him play 35 minutes a night and drive Simmons insane. If he succeeds, it will be even more fun watching the goofy long-lost Hanson brother transform into a solid starter on a real NBA team. Everybody wins in the Neon Jesus Era. Except the Celtics, maybe. We’ll see. Either way, a new era starts in less than two weeks. Get some religion in your life.