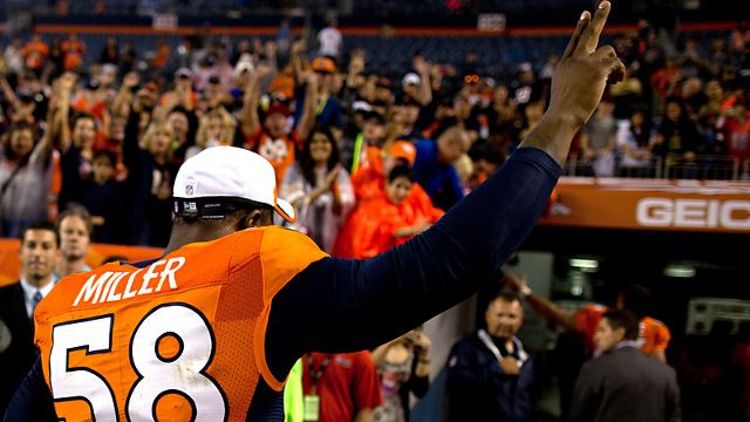 Von Miller, OLB, Broncos
Peyton Manning’s return to Indianapolis also marks Von Miller’s return to the field, and right now it looks like the Broncos need it. After missing the first six games of the season for violating the league’s substance abuse policy, last year’s runner-up for Defensive Player of the Year is coming back to a defense that ranks 23rd in DVOA and 27th against the pass and is 27th in Adjusted Sack Rate. Last year, Denver finished first, thanks mostly to Miller. No pass-rusher got the quarterback on a higher percentage of his rushes a season ago, and outside of J.J. Watt, no defensive player has a more significant overall impact. The worries about Denver’s defense right now aren’t unfounded, but with Miller back, there’s a good chance they won’t be around much longer.

Every draft has those few prospects who for one reason or another tumble down the board on draft day. This year, it started with Sharrif Floyd, who fell all the way to no. 23 despite being considered by many to be a potential top-10 pick. The reasons for Floyd’s fall were never quite clear, but when Keenan Allen fell all the way out of the first two rounds, everyone knew why.

At Cal in 2011 Allen caught 98 passes, and coming into the 2012 season, many considered him a future first-round pick. That all came into question when Allen suffered a PCL injury that ended his season and hampered his ability to prepare for pre-draft workouts. Allen didn’t run at the scouting combine, and at his pro day he failed to crack 4.7 in the 40.

The dilemma that general managers faced with Allen is a common one. His talent said he was one thing. His health said he was another. Ultimately, the concerns about his health won out, and Allen slipped all the way to the third round, when he was picked 76th overall by San Diego. The irony about Allen’s recent rash of success with Philip Rivers (21 catches for 222 yards and two touchdowns in the Chargers’ past two games) is that it might not have happened had it not been for injuries to San Diego’s other wide receivers. With both Danario Alexander and Malcolm Floyd gone, the Chargers had no choice but to turn to Allen, and in doing so they’ve uncovered the player who was originally supposed to go in the first round.

Allen will never be a burner, but he doesn’t have to be. With his excellent knack for getting open in space, feel for the red zone, and great hands, he’s a perfect fit alongside Rivers, who’s completed 72.6 percent of his passes through six games. Plus, anyone who goes with the loose-fitting, long-sleeve T-shirt under his jersey is a winner.

When the Bears picked Bostic in the second round, the thought was that the Florida linebacker would get a chance to step in for the departed Brian Urlacher from day one. Even after signing D.J. Williams, Bostic’s play in the preseason only increased that desire among Bears fans, and many were some combination of surprised and frustrated when Williams, and not Bostic, was named the Week 1 starter.

Well, now those fans will be getting their wish. With Williams done for the year after tearing a pectoral muscle against the Giants, Bostic will get his first start this week for the Bears. It’s not the most newsworthy instance of players replacing legends this weekend, but playing middle linebacker for the Bears does carry weight. Since 1952, the Bears have played just 16 seasons without a Hall of Fame middle linebacker (Bill George, 1952-65; Dick Butkus, 1965-73; Mike Singletary, 1981-92; Brian Urlacher, 2000-12). So, yeah … no pressure, Jon.

Cornerback-WR Matchup of the Week

Earlier this week, I wrote about how the Chiefs used their past decade of drafts to build the best defense in the league. Kansas City’s 2008 draft is one of the best in recent memory. Glenn Dorsey is considered a miss, but the Chiefs also managed to bring in Branden Albert, Brandon Flowers, and Jamaal Charles — one above-average starter and two top-level players at their position. But the best pick from that draft might’ve come in the fifth round, when the Chiefs took Grand Valley State cornerback Brandon Carr.

These days, Carr is in his second year of a $50 million deal with the Cowboys, and through six games, he’s clearly the best cornerback on the roster. Monte Kiffin has used Carr in a variety of ways over the course of the season, but there’s a good chance that the way Kiffin deployed him last week against Washington is the way he’ll be used on Sunday. Earlier in the year, Carr would often stick to one side of the field in both man and zone (although he did shadow Demaryius Thomas a bit), but against Washington, he went wherever Pierre Garcon did. Garcon finished with six catches for 69 yards, but it took 15 targets for him to get there.

Like Washington, the Eagles are a team with a clear no. 1 receiver. Riley Cooper had a nice game against the Bucs last Sunday, but for the most part, the Philadelphia passing game has been all about DeSean Jackson. Garcon has been good all year, but Jackson is at a different level right now. His ability to stretch the field isn’t new, but the way he’s worked in the red zone on touch throws from Nick Foles is something I’m not sure I’ve seen before. Carr has his hands full, but considering how much Morris Claiborne has struggled, lining Carr up against Jackson probably gives the Cowboys their best shot.

Jordan Gross is probably the most boring player in the NFL. Gross is in his 10th season as the Panthers’ left tackle, and all he’s done over that stretch is be one of the more consistent, reliable offensive linemen in the league. Gross’s peak fell short of those from players like Joe Thomas and Jake Long, but as dozens of teams have shuffled through blindside pass protectors in the past decade, Carolina hasn’t worried about that spot since Jake Delhomme’s first season as a starter.

After restructuring his contract this offseason, Gross’s deal is set to expire at the end of the year. He’s made it known that if the Panthers want him back, he’d be more than willing to listen, and he has no real interest in playing for other teams. Seriously, this guy couldn’t be any chiller.

This week’s installment of Gross’s possible farewell tour is notable because he’ll be matched up with one of the better defensive ends in the league. Robert Quinn has mixed in a few duds with his stretches of dominance, but when he’s on, he’s been the most physically impressive edge rusher in football.